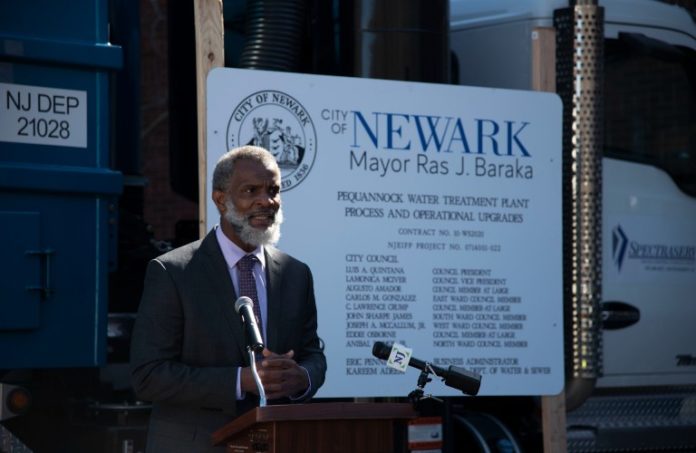 Newark has received national attention – including a visit from Vice President Kamala Harris – for its efforts to quickly replace more than 20,000 lead service lines in an effort to increase the water quality in the city.

Baraka and a host of other dignitaries launched $23 million in new upgrades for a state-of-the-art facility at the Pequannock Water Treatment Plant in West Milford.

When finished, the state-of-the-art system will improve overall water quality and increase the plant’s processing capacity – allowing it to handle up to 60 million gallons per day.

The project, which also will replace obsolete equipment, valves, filter media improvements and make upgrades to the backwash system, is financed by New Jersey Infrastructure Bank Program low-interest loan financing. It was designed by Kleinfelder Inc. and constructed by Spectraserv.

“This is a continuation of our pledge to supply Newark residents with clean and pristine drinking water,” Baraka said. “Our investment record is clear. We put about $200 million in our water and sewer infrastructure even before we undertook the $190 million project to replace every known lead line in the city.”

Baraka said the project – and the plant – was about more than Newark.

“We are also supporting the communities outside of Newark who depend on us for clean water, continuing to invest in our young chemists, scientists, and engineers, and being best and first in class with our entire infrastructure,” he said.

Kareem Adeem, director of the department of water and sewer utilities, said the project also will include building a new system control center.

“This work is not only about needed maintenance, but state-of-the art improvements,” he said. “We have five outdoor reservoirs that store 14 billion gallons of water. These new systems will help us draw and purify that water with greater speed and efficiency.”

Adeem said many deserve to be lauded for the effort.

“It shows people all that goes on behind the scenes to make the water coming out of their tap among the best in the country,” he said.

Shawn LaTourette, the commissioner of environmental protection, said the state is eager to do what it can to help.

“The Murphy Administration is proud to partner with the City of Newark and water systems across New Jersey by investing in infrastructure upgrades that will better protect public health and deliver clean drinking water for our children and families,” he said.

“The state-of-the-art improvements that we celebrate today at the Pequannock Water Treatment Plant represent yet another step forward for our state, reaffirming our commitment to clean water for every community.”