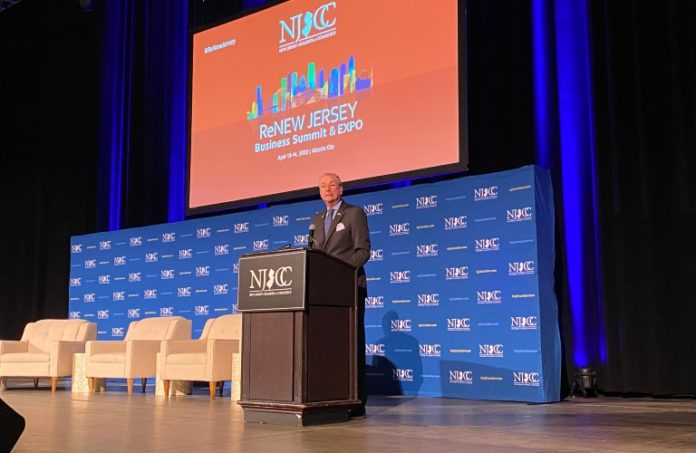 John Harmon, the highly regarded head of the African American Chamber of Commerce of New Jersey and long-noted truth-teller in the state, cut straight to the point.

Just minutes into the opening panel at the ReNew Jersey Business Summit Wednesday in Atlantic City – a summit organized by the state chamber to find ways to supercharge the economy – Harmon offered a solution that seemingly had everyone in the room nodding their heads in support.

“We have to get creative,” he started. “I would propose that this group, right here, have a meeting with the administration. Get in a room, lock the door, and let’s figure it out. This is not complicated to me.”

If only it were that easy.

The first day of the summit – with additional panels on health care, infrastructure, taxes and incentives – did all that it was intended.

There was serious discussion on labor shortages – and particularly how childcare is preventing the state from taking full advantage of its female workforce. There was talk of how the state needs to take advantage of the billions of federal infrastructure money to not only rebuild the state, but to do it in a smart and equitable way. There was talk about how issues involving energy and the environment will play a major role moving forward.

And there was hope that maybe, just maybe, the state could use some of the remaining federal money to help pay down the crushing billion-dollar burden of replenishing the unemployment insurance fund – a job that will fall on the business community. (It’s something dozens of other states have done.)

Suggested solutions came from everywhere – including an intriguing one, seemingly out of left field: What would happen if the state got rid of all of its business incentive programs, but also all of its business taxes? Would that spur enough economic growth to be a plus in the economy of the state?

There was even a this-isn’t-crazy-it-actually-makes-sense idea of the Legislature having a “cumulative calculator” so it could see how “one more small fee” placed on business actually was adding to an already overwhelming number of requests.

Yes, there was plenty offered that could be discussed in that proposed closed-door meeting. At least from the side of business.

But it takes two to talk.

After four hours of discussions of what is going wrong, Gov. Phil Murphy arrived for the keynote address to discuss what is going right. It wasn’t a logical ending to the day. In fact, it illustrated how differently the administration and the business community sees the state.

Murphy gave a 20-minute address that the audience found uninspiring. It felt like a stump speech, just one that lacked interruptions for applause from an engrossed and engaged audience. That weren’t having it.

Murphy talked of how he feels his economic policies have the state in a much better place than it was when he took office.

“I’m happy to be here today,” he said. “Not because all of our work is done. Not because we’re patting ourselves on the back. None of that is true. But frankly, New Jersey has a very good story to tell.”

He talked about the state’s GDP numbers – and while they swing wildly from quarter to quarter, they are reaching (if not surpassing) pre-COVID numbers.

He talked about a surge in venture capital dollars – something that only will increase after the Economic Development Authority, on Wednesday, authorized the rules for its transformative Evergreen Fund.

Murphy talked about how the EDA has been assisting small business (there have been grants of nearly $800 million) and investing in NJ Transit and affordable housing. He even talked about two things no one really thinks can be accomplished – reducing the cost of health care and property taxes.

And, of course, Murphy talked about how the state got its first credit upgrades in decades.

Talk – in a closed room? Face to face – when you lock the door until the issues get resolved?

Murphy isn’t opposed. Quite the opposite. He said he likes business events, but he also likes daily discussions.

“While these events are critical for focusing on issues key to your business and our economy, they are no substitute for the day-to-day give and take,” he said. “I think it’s and both – that’s the way it should be.”

“I’m pleased by the way we have worked together over the past four years – and I look forward to the four we have to come,” he said. “I know we’re not always going to agree. But I also know that we’re going to have serious discussions where we talk with each other – and not over each other.”

Good luck agreeing on an agenda.

Keeping our eye on the economic prize

NJ Society of CPAs: State could learn from errors of others...