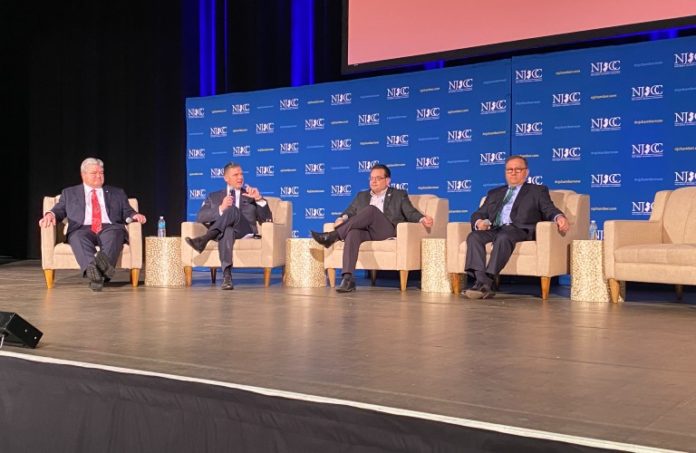 After an hour of hearing four top legislative leaders discuss all the ways they want to help the business community, they finally got the question everyone wanted to be asked:

Would the state use some of the billions in federal relief money – money intended to help states recovery from the economic impact of the pandemic – to make up the $1.6 billion with a ‘B’ shortfall in the Unemployment Insurance fund?

“That’s certainly under active consideration,” State Senate President Nick Scutari (D-Linden) said to the crowd of business leaders at the ReNew Jersey Business Summit. “I mean, everything’s on the table in the next couple of months.”

That wasn’t the answer the business audience wanted to hear.

Neither was this: “As you could probably imagine – and I know that all the leaders up here can tell you – there’s a lot of requests,” Scutari said.

This request, of course, is different.

It is a request that the majority of other states in the country have filled. Some, in fact, didn’t need to be asked to do so. Not doing it actually makes New Jersey an outlier.

And it comes at a time when Scutari acknowledges the state is in good financial shape. Far better, perhaps, than it has been in decades.

“Utilizing the funds that we do have available in the most strategic way possible is something that’s going to be under active consideration in the next several months,” Scutari said. “And that’s one of the areas that we’ve been talking about.”

The guess here is that replenishing the fund will not be a priority. After all, if that was Scutari’s desire, what better place to say so.

Assembly Majority Leader Lou Greenwald (D-Voorhees) talked how important the fund is and that the state is giving business owners three years to replenish the fund.

“I think it’s the most responsible and reliable plan and gives small businesses relief,” he said.

As it now stands, the replenishment schedule looks like this:

· Fiscal Year 2022: New Jersey businesses are currently paying $252 million more to the UI fund that they did pre-pandemic;

· FY2023: An additional $296.6 million will be added to that total, meaning New Jersey businesses will be asked to pay $548.6 million more than they did pre-pandemic;

· FY2024: An additional $336.4 would be added, meaning New Jersey businesses would be on the hook for $885 million more than they paid pre-pandemic.

It’s a brutal amount – especially for the businesses that were hurt so badly during the pandemic. It’s why dozens of states have used federal assistance to replenish their UI funds.

Republican Majority Leader Steve Oroho (R-Sparta) was clear about where he stands on the issue.

“Most states have used it already for that purpose,” he said. “New Jersey should, too.”