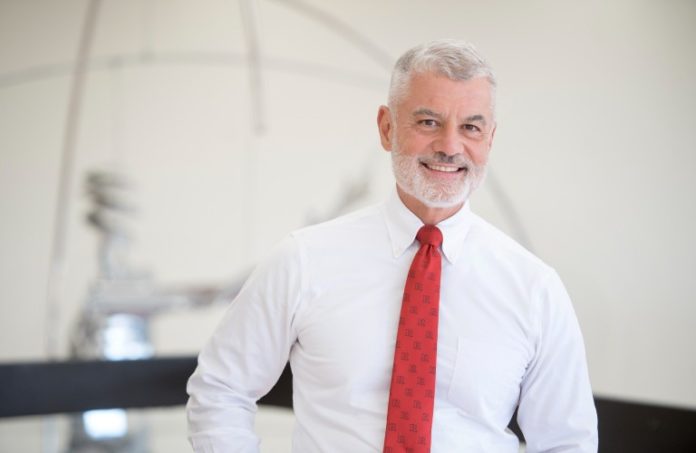 Petros Levounis, professor and chair of the Department of Psychiatry and associate dean for professional development at Rutgers New Jersey Medical School, has been named president-elect of the American Psychiatric Association.

Levounis’ term as president-elect of the APA will begin in May at the conclusion of the APA Annual Meeting. He is the first openly gay psychiatrist elected to the position and is also the chief of service at University Hospital in Newark.

“This recognition exemplifies Dr. Levounis’ experience as an academic leader in psychiatry and as an expert in addiction medicine,” says Brian Strom, chancellor, Rutgers Biomedical and Health Sciences. “His willingness to share his expertise and his dedication to research and advocacy will be an asset to the APA.”

Among Levounis’ priorities as APA president, when he assumes that role in May 2023, is to capitalize on this unique moment when people’s awareness of and interest in mental health is at its highest.
To achieve this goal, he plans to:
Expand the workforce through building more residencies and developing innovative career pathways for young psychiatrists.
Fight for parity in reimbursement of clinical services on par with other medical specialties.
Amplify the psychiatrist’s voice on critical social issues, such as systemic racism, homophobia and climate change.

Levounis has had numerous leadership positions within the APA and other national organizations. He currently serves on the Psychiatric News Editorial Advisory Board, and he has also served as vice chairperson of the APA Publishing Editorial Board, and member and vice chairperson of the Council on Addiction. Levounis has served on the boards of the American Society of Addiction Medicine and the American Board of Addiction Medicine. In 2017, he was elected as an honorary member of the World Psychiatric Association.

Levounis has published 14 books including the textbook of Substance Dependence and Co-Occurring Psychiatric Disorders, Motivational Interviewing for Clinical Practice and Technological Addictions. His books have been translated into French, German, Hungarian, Japanese, Portuguese and Spanish.

“I am honored and grateful to have been elected by my fellow members to help lead the APA,” Levounis said. “I look forward to helping build APA’s leadership role in mental health both within American medicine and in collaboration with our colleagues across the world.”

Newark Waterfront: Next great Boraie-Shaq multifamily project in Newark will have 333 units