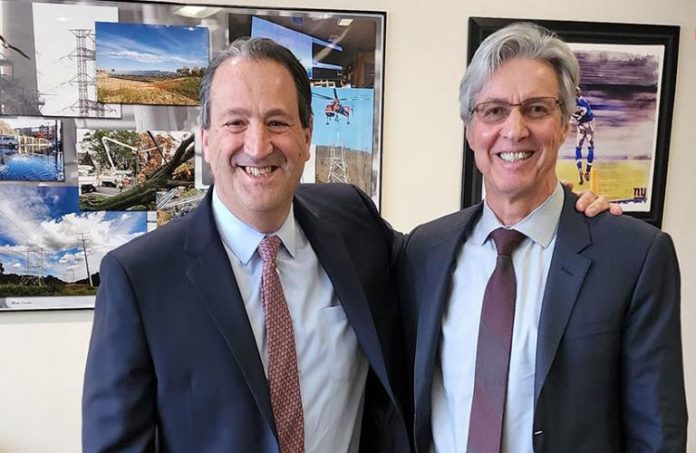 Ralph Izzo, the chairman, CEO and president of Public Service Enterprise Group — and one of the most respected and highly regarded business leaders in the state — announced Tuesday morning that he will be retiring at the end of the year.

Ralph LaRossa, PSEG’s chief operating officer, will succeed him as CEO and president, effective Sept. 1 — when Izzo will assume the title of executive chairman until the end of the year.

Izzo, as he always does, spoke eloquently about his time at the company and his decision to retire.

“It has been an honor and a privilege to serve as CEO for the last 15 years,” he said in a statement. “I started my career with PSEG 30 years ago because I saw the possibilities to shape a future where customers use less energy, the energy they use is cleaner than ever before, and delivered with reliability unsurpassed in our history while adding shareholder value.

“Our focus as a company has evolved from delivering electricity and gas to enhancing lives and communities. As corporate citizens, we have a responsibility and obligation to stand up for the equitable treatment of our employees, our customers and the many diverse communities we serve. Throughout my career, I have endeavored to put the company, our communities and the planet on a sustainable path. I am proud of the accomplishments our 12,500-strong workforce has made.”

“It cannot be overstated how significant an impact Ralph Izzo has had on PSEG over the past 15 years as CEO,” she said. “Ralph is a visionary leader, whose passion for clean energy has been the driving force of his career, shaping PSEG’s purpose, culture and transformation. He is a highly respected and influential clean energy voice here in New Jersey and globally.

“All of this, coupled with his relentless focus on customers, communities and a commitment to building a strong, diverse talent pipeline have strengthened the company and positioned PSEG well for the future.”

Here are just some of the high points of Izzo’s tenure:

Izzo has been great for shareholders, too.

Since he began his leadership role in 2006, PSEG shareholders investing $100 would have realized a total shareholder return resulting in $328 today, an annualized growth rate of close to 10%. PSEG delivered financial results at or above the midpoint of management’s guidance in each of Izzo’s 15 years as CEO, and extended PSEG’s incredible track record of paying dividends to shareholders to 115 years and counting.

Izzo lauded the announcement that LaRossa, his longtime colleague, will succeed him.

“For almost 20 years, Ralph LaRossa and I have worked side-by-side building out PSEG’s vision,” he said. “With our Powering Progress vision, mission and strategy firmly in place, I am truly excited about the future prospects for PSEG under Ralph LaRossa’s leadership.”