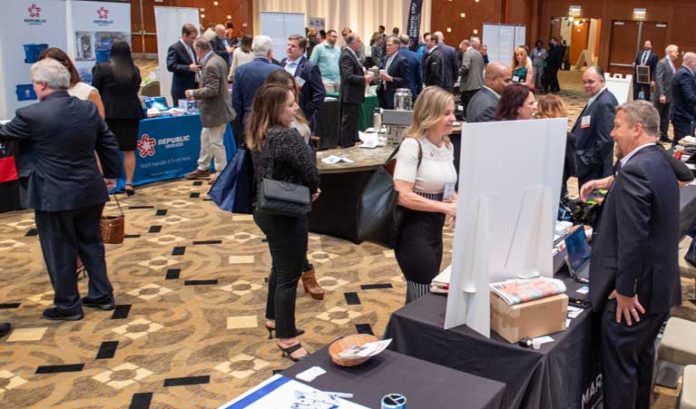 New Jersey Chamber of Commerce CEO Tom Bracken said all of the panels at the first ReNew Jersey Business Summit were well received. As was the talk by Gov. Phil Murphy. And the event featuring key leaders in the Legislature.

All of it spurred the type of conversations about the business climate in the state that the chamber wanted when it conceived the event as a replacement for the Walk to Washington.

The two-day ReNew Jersey Business Summit, which drew more than 600 business leaders, was aimed at coming up with realistic requests and recommendations for state officials on all things related to the business climate.

But, when Bracken looks back at last week’s event at Borgata Hotel Casino & Spa in Atlantic City, there was another aspect of it that let him know the chamber was onto something: the expo.

The chamber had dozens of tables, featuring various businesses from a variety of sectors. The feedback the chamber received from the expo has been a pleasant surprise.

“You know the deal with expos; most people just walk by and grab the trinket or the giveaway,” Bracken said. “The people who rented tables in Atlantic City told us they had real conversations — and they were confident those conversations were going to lead to business.”

That’s what the summit was all about, Bracken said. And what he is working to make the event’s legacy.

Bracken said he already has scheduled meetings with the Legislature and the Governor’s Office to continue the conversations that started in Atlantic City.

“The main goal going forward was to get a commitment for regular meetings with the administration and the Legislature to talk about the issues, get them on the table,” he said. “You can’t solve these issues, we can’t move forward, unless we have discussions — and the only way to have discussions is to formalize the commitment on both sides.”

The next question: Will the event return in 2023?

It was billed as a replacement for the Walk to Washington, but Bracken said the response was so overwhelmingly positive that chamber officials will meet in the coming weeks to see how it fits into future calendars.

Bracken said the ReNew Jersey Summit could be held in addition to the Walk to Washington, instead of it — or in any combination. That will be decided in the coming weeks, Bracken said.

Two things, he said, were clear:

1. The event was wanted:

“People said, ‘Whatever you do moving forward, we want to be part of it,’” Bracken said. “People said, ‘This was exactly what we needed to do as a business community.’”

2. The timing was right:

“The state is arguably in one of the best fiscal positions it’s ever been in, based on bond ratings going up and revenues going up,” Bracken said. “We’re operating from a position of strength right now.

“The time to invest is when you’re strong, so, if we are as strong as the governor says we are, it is time to use that money to invest, not to sit on it and wait for a rainy day — because we’re in a rainy day right now.”

“People already are asking about it,” he said. “People understand the value of the Walk; they got very enamored with this new event.

“We have a lot to discuss.”