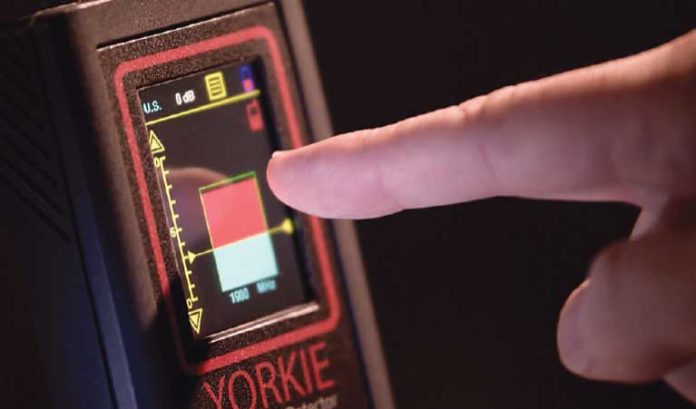 The name doesn’t say it all when it comes to Berkeley Varitronics Systems Inc.

Behind that mouthful — and its humble Metuchen base, its sole family-owned footprint — lies a company that’s playing a supporting role in some suspenseful narratives.

The pursuit of the stalker dropping miniature trackers into a famous model’s purse.

The race against time to locate a man buried under an avalanche’s endless ice.

The efforts to prevent a “hit” from being called in by a crime boss scheming behind bars.

Believe it or not, this business finds a part to play in all of that and more.

Groundbreaking is how Scott Schober, CEO and president of Berkeley Varitronics Systems, describes the innovations his team of 25 engineers have made. And it’s hard to argue with it, as the work has earned them clients as large as PepsiCo and NASA. In other words, not bad for a 50-year-old small business in Metuchen.

Schober, whose father founded the business, said that, in the process of reinventing itself throughout the years, it’s been asked to solve some interesting problems involving wireless technologies. As it breaks out of its small business bubble for the first time, Schober described to ROI-NJ what his local company’s solutions are accomplishing worldwide.

If you have not heard of AirTags: It’s a coin-shaped device that Apple sells to hunt down misplaced items (suitcases, bags or even a missing dog’s collar) using a dedicated app. Where Berkeley Varitronics Systems comes in is what else AirTags might be hunting for: people, as well as drugs.

“We recently got a call from a law enforcement agency … because these devices, which can use iPhones to locate a target anywhere in the world, presents some amazing but also scary opportunities,” Schober said. “These devices, the size of a quarter, are being slipped into purses and pockets by bad guys in places like bars.”

Suspects are planting AirTags and then following people’s movements without them knowing, Schober said, even with the devices having some features to try to discourage this sort of behavior. The devices are smaller, cheaper and leave less of an evidence trail than standard GPS tracker devices, he added.

Besides tracking people, Schober said a Miami-bound container ship with a theoretical 10,000 kilos of cocaine might prove to be the sort of valuable shipment that bad actors want to watch closely as it moves to its intended endpoint.

“So, we’ve done a lot of research and development to understand how the technology works to help the good guys find these devices,” he said, adding that it has led to a tool that can “sniff” an area to determine if there is a suspect AirTag in a stalking victim’s purse or a box with a drug shipment.

Almost by accident, Berkeley Varitronics also came up with a product that is now in high  demand by international search and rescue groups.

The company’s Wolfhound-Pro, which can detect mobile phone signals, was credited in the rescue of a father who went missing after an avalanche struck in the French Alps last year. The 50-year-old man was with his wife and two children when an avalanche separated him from his family, who escaped unscathed.

About 140 volunteers searched for the individual for three hours, to no avail. Not even rescue dogs could sniff him out — because, as it was later discovered, he was caught under 2.5 meters of snow.

It was only a result of the Wolfhound-Pro detecting pings of a cell phone beneath the feet of rescue parties that he lived through it, Schober said.

There are other reasons — similarly life-or-death — you might want to find a cell phone.

Schober said he’s heard of several instances of people being killed by a criminal who is “calling in havoc” from the inside of a prison.

“Contraband cellphones get into correctional facilities in a lot of different ways,” he said. “It might be someone on the outside throwing a basketball filled with a dozen cell phones over a fence that is later cut open; it could be a phone strapped onto a cat that crawls through barricades, onto prison grounds; it could be a corrupt guard, or food services. And, once inside, those phones can be used for criminal purposes, such as gang activity or witness intimidation.”

Berkeley Varitronics sells a contraband cell phone detector called the Yorkie that corrections officers can use to be alerted to the presence of active cell phones within 150 feet. Similar products sold by the company can also be used by security personnel in settings with no-cell-phone policies (often, that’s classified government agency settings).

In the prison context, Schober said officers can — covertly — use these devices to steer quickly to where cell phones are.

“And that might be a hole in the wall in a prison cell,” he said. “I’ve even heard of it leading them to prisoners in scenarios where the phone is actually still in their body cavity … and they’re then sent to medical to extract it.”

Catching cheaters and the rest

The head-turning list of what the company does goes on.

It sells cell phone detectors called the PocketHound, a device meant to catch students whipping out cell phones in the back of lecture halls to cheat on tests. Using this instrument hidden in their pocket, proctors can go up and down classroom aisles to find any cell phones transmitting signals in proximity, Schober said.

It also sells a device that activates and takes pictures when a train operator in the cab of a locomotive sends a text or takes a call. It was something they were called on to do following a 2008 deadly head-on collision between two trains that killed 25 and injured 135. The crash, which occurred in Chatsworth, California, was blamed in news reports on a driver sending and receiving text messages seconds before the event.

“These are just a few examples of our expertise in different industries,” Schober said. “We’re a small company, but we do a lot of exciting stuff.”