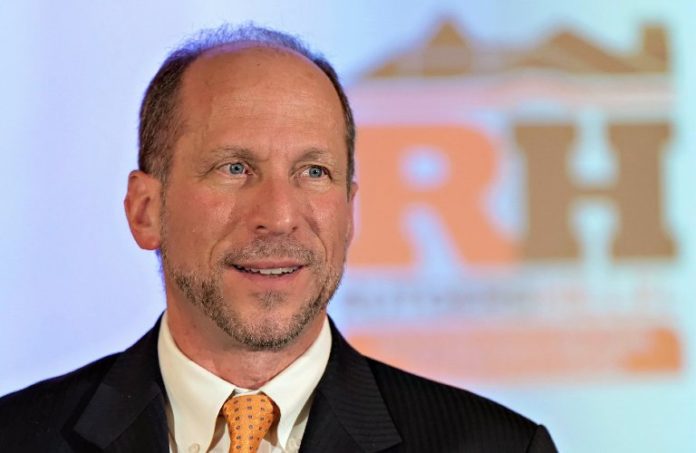 Ron Ladell didn’t pick up in real time all the life lessons — and life skills — he learned when he was a student at Rutgers University decades ago.

How being president of his fraternity helped him understand the importance of being part of a diverse group, running a meeting, overseeing finances, interacting with officials at the school and in the New Brunswick community and more.

Ladell was simply trying to figure out his future — as all college students do.

Earlier this month — when Rutgers Hillel bestowed the Visionary in Partnership Award to him for his commitment to Jewish student life on the campus and in the community at large — Ladell looked back upon his college days at Rutgers and recognized how they were the foundation for all he has become: a successful father, husband and business executive.

“It is profound the number of skills that I have used over my entire career,” he told a crowd of more than 400. “Rutgers provided me with a great return on my investment.”

Ladell, who earned both his undergraduate and J.D. from Rutgers, has been repaying the school ever since.

Ladell, who oversees development activities throughout New Jersey for AvalonBay, has been especially present at the Rutgers Center for Real Estate, where he serves on the Executive Committee — helping to plan the center’s activities and developing an undergraduate and graduate-level curriculum for the next generation of real estate leaders.

He also is an adjunct professor at the Rutgers Business School. It is here that Ladell feels he can have the most impact.

“I have been blessed with the opportunity to interact with students as a professor, teaching real estate law each fall and real estate development each spring,” he said. “For three hours each Tuesday afternoon, no pending deals at AvalonBay mean anything, as I relish the interaction with approximately 50 juniors and seniors in each of my classes.”

Ladell told the audience that he is most pleased when he can actually see analysis taking place by the students in real time.

“When a question is asked of me, I often try to use a Socratic method and draw in other students to the interaction,” he said. “Occasionally, the initial question can boomerang around class, and you can see the deductions and conclusions that students are making.”

Ladell isn’t the only one who is seeing his impact.

Hillel officials said the recipient of the Visionary in Partnership Award is an individual who embodies the Jewish value of tikkun olam, a pursuit of justice, healing and repairing of the world.

Ladell, they said, was honored in recognition of his strong moral character, compassion and devotion to his students and community.

Ladell said he was humbled by the recognition.

“It is both rare and special to be honored by an institution where I continue to have an ongoing 40-year relationship, starting with receiving degrees as both an undergraduate and law student and currently as an adjunct professor,” he said. “The evening provided a wonderful opportunity to finally see so many colleagues and friends in person.”

It also provided an opportunity to give a lesson to the audience, as he implored them to find time to mentor, interact and assist students — something he does on a regular basis, to much joy.

“Beyond the actual classroom setting, I am regularly asked for career advice and what a student can do to prepare themselves for a time beyond Rutgers,” he said. “My response is both narrow and broad:

“First, I emphasize that Rutgers is a unique institution with a boundless amount of activities. Each student should be bold and seize the opportunity to find and develop their interest and passion. There are over 750 student clubs — consider an intramural sport, learn a foreign language, spend a semester in Barcelona or a summer studying art in Italy like my children did, exposure to a new culture, or become active in Hillel.

“Second, and from a broader and more holistic perspective, I emphasize the need to refine one’s ability to communicate both verbally and in written form, to critically think and not just simply accept an answer. I encourage the student to become a lifelong learner and to seek excellence beyond just academics — but in all pursuits. And I reiterate that, to achieve those things, you must put yourself in a position to do so.”

The conversations, he said, benefit both the mentor and the mentee, Ladell said.

“I am reminded each day that, not only is my advice valuable and helpful to each student, but it is just as rewarding and beneficial to me,” he said. “It is that message that I want to conclude with.

“Each one of you that is more than a few years established in your career, that has been through some of your own successes and tribulations, needs to find the time to give back to those at a more nascent stage.”