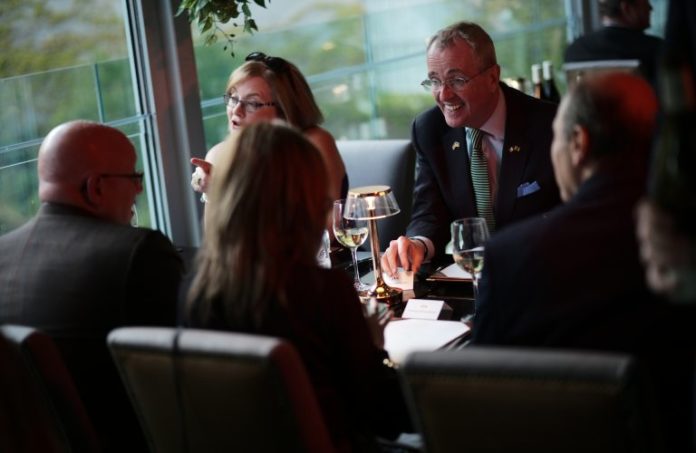 Apparently, renaming all of the service plazas in New Jersey was just a start.

Monday in Dublin, Gov. Phil Murphy and corporate leaders from Applegreen, one of the largest on-highway service plaza operators in the U.S. and Europe, announced the company will relocate its U.S. headquarters to Glen Rock and will redevelop all of the state’s 21 on-highway service plazas in the coming years — a move that is expected to create nearly 1,000 jobs.

The headquarters move will add at least 100 new jobs to the state in finance, administration, development and logistics. But the big job numbers will come in the redevelopment of the plazas — a move the company said would create 800 new jobs in the coming years. In total, it’s believed to be a $126 million investment.

The first two redevelopments, at the Woodrow Wilson and Molly Pitcher travel plazas, are expected to be completed before the July Fourth holiday.

Applegreen, the largest service plaza operator in the country (with more than 250 sites in 18 states) previously had a presence in Glen Rock. It acquired the concession for 21 key service plazas across the state of New Jersey in summer 2021 and manages a workforce of approximately 5,000.

The announcement came on the first day of Murphy’s four-day mission trip to Ireland.

“As a proud Irish-American, I am thrilled to be in Dublin and joined by Applegreen, Ireland’s foremost service plaza operator, to announce the relocation of its U.S. travel plaza headquarters to New Jersey,” Murphy said.

“Applegreen is a world-class travel infrastructure partner who will generate significant economic growth for the state and bring innovation and expertise to the redevelopment of New Jersey’s 21 on-highway services plazas. We welcome the hundreds of new jobs that Applegreen will bring to New Jersey and look forward to building a strong partnership that drives our state’s innovation economy forward.”

Applegreen USA Operations President Elizabeth Pierce said the move to New Jersey made sense on a number of levels.

“Northern New Jersey proved an ideal location for our headquarters, as it is centrally located amidst many states in which we operate, is close to several major airports and offers top talent for our rapidly growing business,” she said.

“Our Northeast footprint is expanding rapidly and the opening of our new headquarters and redevelopment of 21 service plazas will enhance connectivity and convenience for our many customers. The creation of hundreds of new jobs through these exciting projects will deliver a significant boost to the New Jersey economy, and, as such, today’s announcement is a genuine Irish-American win-win.”

Applegreen was taken private in March 2021 by a partnership comprised of its founders, Bob Etchingham and Joe Barrett, and Blackstone Infrastructure Partners, a leading investor in U.S. infrastructure assets.

Etchingham, the CEO of Applegreen Ltd., was at the announcement.

“We look forward to continuing to be a good partner to New Jersey and to helping the Garden State maintain its national transport connected competitiveness for many years to come,” he said.

Sebastien Sherman, a senior managing director at Blackstone Infrastructure, also applauded the move, which he said will have huge ramifications for New Jersey.

“We’re delighted to play a lead role in updating New Jersey’s infrastructure to better serve the needs of modern travelers and state residents,” he said.

“Gov. Murphy’s leadership is a national model for effective public-private partnerships. Blackstone Infrastructure looks forward to deepening our ties to the Garden State, working with government agencies and local stakeholders to deliver high-quality infrastructure benefiting local communities and the environment for decades to come.”

Murphy made national headlines last summer when he announced the state was renaming nine service locations for honorees in the state’s Hall of Fame, including Jon Bon Jovi. And, while that announcement was more a branding play, Monday’s announcement figures to have far-reaching economic benefits.

South Jersey Industries to be acquired by Infrastructure Investments Fund in...

Champions of the C-Suite: ROI-NJ names financial, tech leaders who will...