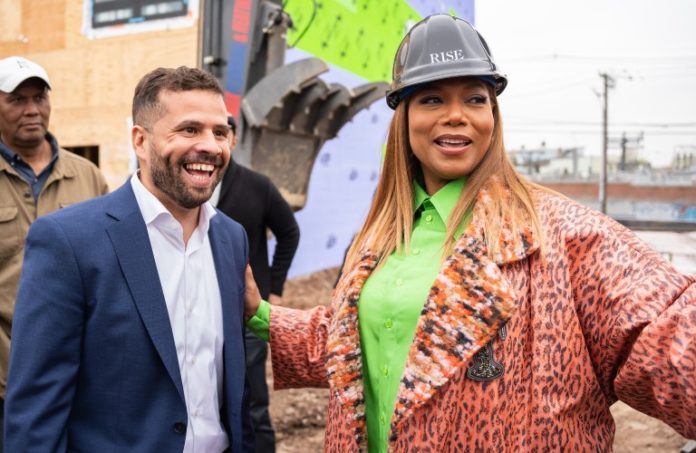 Newark native and BlueSugar Corp. co-founder Dana Owens, better known as Queen Latifah, returned to her roots in the Brick City on Tuesday for a groundbreaking ceremony for new housing development Rise Living.

A collaboration between lead developer Life Assets Development, Gonsosa and BlueSugar Corp., together with local leaders from the city of Newark, celebrated the commencement of the new project, which complements a citywide initiative to revitalize the face of Newark and provide modern housing to its residents.

Work already began on the site at 650 Springfield Ave. in January. The official groundbreaking ceremony initiated the next phase of work on the site, leading to an eventual 76 units, as well as 1,900 square feet of ground-floor space for a nonprofit organization.

Pre-leasing is expected to commence in July.

The development is looking toward the future of Newark and will transform several properties along 19th Avenue, South 16th Street and South 17th Street into modern housing and mixed-use spaces. The buildings will include a fitness center, business center, charging stations for electric vehicles, and ground-floor parking spaces.

Sixteen units will be classified as affordable housing, and market-rate rents are set to start at $1,800. Modern amenities will include touchless entry and free Wi-Fi in all common areas, online portals for maintenance and rent payment, washers and dryers in units, hardwood floors, green roofs in selected units, air-conditioning, stainless-steel appliances and more.

“We are thrilled to have secured such an ideally-located property with BlueSugar Corp., and we appreciate the confidence that the city of Newark has placed in us,” Alberto Goncalves, CEO of Life Assets Development, said. “We believe Rise Living will be a complementary addition to the City’s multibillion-dollar revitalization plan, and we look forward to creating a community of value that taps into the neighborhood’s full potential.”