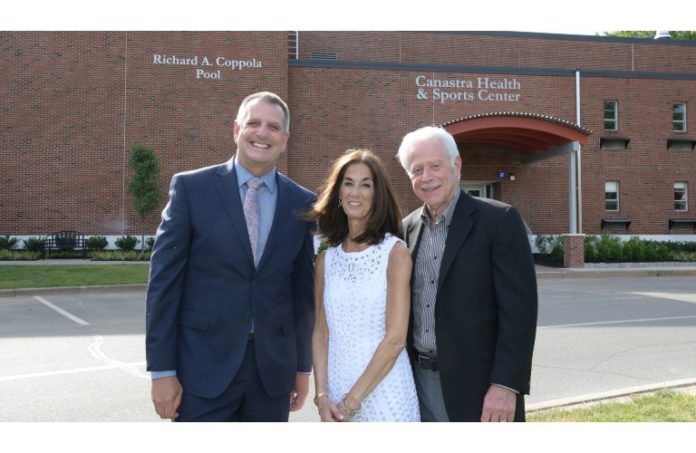 Wayne Canastra and Jill Hammer Canastra of the Class of 1972 have stepped forward as the source of the largest gift in Rider Athletics history.

Rider University initially announced the couple’s anonymous $2.5 million leadership gift to the Rider Arena Project in October 2020. The Canastras have chosen to come forward now to show their commitment to Rider in a time of extraordinary challenges.

“We want our unwavering commitment to the University to be known,” said Wayne Canastra, a co-founder of Affiliated Management Inc., a privately owned property management firm. “Coming out of this incredibly difficult time of the pandemic — a once-in-a-lifetime challenge, really — we wanted everyone to know how much we believe in the mission of Rider and in its students.”

“Over the years, the amount of our gifts has grown as we have taken a great deal of pride in seeing the difference that each has made to the university,” said Jill Canastra, a Rider trustee. “I feel that Rider is a very special place whose size offers the unique ability to nurture and deliver great opportunities to all of its students, and we want to do all that we can to support it. We both believe that now is the time to show how much Rider means to us all by investing in its future.”

The couple’s historic commitment to athletics has backed the university’s campaign to elevate Alumni Gym into a modern NCAA Division I arena. They are hoping other donors will follow their lead.

Upgrades will also include a significant expansion of the existing sports medicine area, a dedicated locker room for the volleyball team and a new $1.7 million strength and conditioning center for student-athletes.

Among the naming opportunities still available are the arena’s competition court, the basketball practice facility, men’s and women’s locker room lounges and conference rooms. Supporters can additionally name an arena seat for $500, a locker for $1,000 or an arena courtside padded seat for $2,500, or join other prominent donors on a planned Donor Wall for gifts of $5,000 or more. These and other naming opportunities may be found here.

“The project promises to enhance the game-day experience for fans and students,” Athletic Director Don Harnum said. “It will also boost Rider’s profile and help with recruitment in the highly competitive Metro Atlantic Athletic Conference. Excitement for the project is building, and it is our hope that additional contributions will bring us to our goal before the next basketball season begins.”

The $18.2 million project will complete the university’s vision for the building, built in 1958 and the first on Rider’s campus. Over the years, the complex has added a practice facility and renovated men’s and women’s basketball locker rooms and coaches’ offices. The main court’s transformation has brought the installation of new flooring, lighting, sound and video systems. In addition to new courtside and other seating, better sightlines have been created and walkway tunnels were established for better crowd flow.

In 2019, the Canastras, who are consistent supporters of Rider Athletics as well as other areas of the university, contributed toward the cost of renovating the Richard A. Coppola Pool and the outside of that building. That facility is now named the Canastra Health and Sports Center in recognition of the couple’s gift. The arena will also be named in the couple’s honor upon completion of the project.

Jill Canastra was recognized with a Lifetime Achievement Award from Rider’s School of Education in 1998. A retired middle school counselor who formerly worked for the Millburn Township board of education, she earned a bachelor’s in elementary education from Rider and a master’s in counseling with a certificate in guidance from Seton Hall University. Before starting her family, she worked as an elementary school teacher.

Wayne Canastra earned a bachelor’s in secondary education from Rider, but, when he graduated, teaching jobs were in short supply in New Jersey, so he switched his career path to real estate. The company he co-founded manages multifamily residential, professional and commercial real estate in northern New Jersey; Bucks County, Pennsylvania; and Rockland County, New York. He is a prior member of the board of directors for New Jersey Special Olympics and a former board member of the Barnabas Health Care System.

The couple are also members of the 1865 Society, a special community of donors dedicated to shaping the future of Rider through annual gifts to the University.

“Jill’s and Wayne’s many professional accomplishments are a testament to the transformative power of a Rider education,” Rider University President Gregory Dell’Omo said. “Their ongoing support of areas across the university underscores a core belief that education has the capacity to improve one’s life.

“Thanks to the Canastras’ incredible generosity, our athletes can look forward to competing in top-notch facilities. Their unflagging dedication strengthens Rider and enables continued improvements to our campus. Such longtime supporters are foundational to the University’s outlook.”