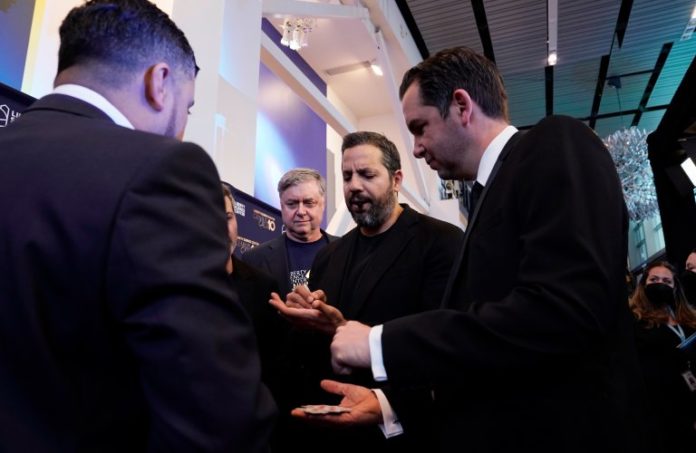 Paul Hoffman, the CEO, president, overseer and orchestrator of all the great things at Liberty Science Center, couldn’t help but smile after the Genius Gala X on Monday night in Jersey City.

He was amazed at the stories of the latest three honorees — Hugh Herr, Priyamvada Natarajan and Robert Montgomery — who certainly have lived up to the lofty title.

He was thrilled that the gala was an in-person event for the first time since 2019 — as LSC was able to personally thank so many of the donors who have provided so much help during the pandemic.

He was delighted to share more information about SciTech Scity — the groundbreaking innovation hub and high school that has broken ground.

And he was ecstatic that science — not debate about science — was the center of attention.

“It’s such a tumultuous time,” he said. “But, if we can just get through the next few years, science is going to make our collective lives so much easier.”

The latest Genius honorees certainly are doing that.

Brownlee, a YouTube science and technology reviewer and interviewer, is known professionally as MKBHD. He has more than 15 million subscribers and nearly 3 billion total video views on YouTube. Beyond that, he hosts the popular podcast Waveform.

Herr, a double-amputee since he lost both legs below the knees to frostbite after a teenage mountaineering accident, is a real-time bionic man, someone who has devoted his working life to restoring mobility to the physically challenged.

As the co-director of the Center for Extreme Bionics at the MIT Media Lab, he is a pioneer in “biomechatronics” technology, which combines human physiology and electromechanical devices to create a blending of body and science only previously imaginable in Hollywood.

Natarajan, a professor of astronomy and physics at Yale University, specializes in mapping the unseen universe — everything from dark matter and dark energy to black holes.

One of the foremost cosmic cartographers in the world, she is proving the theories of some of the greats before her, including Albert Einstein.

Montgomery, the director of the NYU Langone Transplant Institute, is a practicing transplant surgeon who himself is the recipient of a heart transplant. He is a pioneer of both the laparoscopic procedure for live kidney donation and the practice of “domino-paired” kidney swaps — group donations that allow incompatible kidney transplant patients to receive the kidneys they need.

He is responsible for over 1,000 living donor kidney transplants each year — and is on a quest to fix the supply-and-demand transplant imbalance that results in thousands of deaths each year.

“I’m amazed when I look at the people that we honored tonight,” Hoffman said. “They are brilliant, have grit and determination, tons of humility and humanity — and two of them have overcome incredible personal challenges.

“I’m always blown away by the quality of our honorees — and I’m in this field.”

Of course, the event is as much about honoring the present as preparing for the future.

Liberty Science Center is a 300,000-square-foot, not-for-profit learning center located in Liberty State Park on the Jersey City bank of the Hudson River near the Statue of Liberty. Dedicated to inspiring the next generation of scientists and engineers and bringing the power, promise and pure fun of science and technology to learners of all ages, Liberty Science Center houses the largest planetarium in the Western Hemisphere, 12 museum exhibition halls, a live animal collection with 110 species, giant aquariums, a 3D theater, live simulcast surgeries, a tornado-force wind simulator, K-12 classrooms and labs, and teacher-development programs.

The pandemic has been a challenge for an institution that is geared toward the next generation of geniuses.

Liberty Science Center was only completely shut for six months — as it reopened to limited capacity in the fall of 2020 — but that wasn’t good enough for Hoffman and his crew, who quickly pivoted to virtual learning.

LSC provided STEM programs, free of charge, to nearly 1 million students around the globe — an effort that was funded by many of the sponsors in the room.

Next up is SciTech Scity, the long-planned and -hoped-for 30-acre innovation campus that aims to launch and grow world-changing science and technology companies in an incubator space — which will be next to a high-tech high school to provide a STEM education unlike any other in the world.

“We are about to start clearing the land,” he said. “It’s amazing to think that we’re going to have a place that will put a total spotlight on New Jersey.

“We’ll be like a perpetual World’s Fair, not just with the companies that are based here doing incredible things, but a place where any company that wants to can come in and show off something that’s going to make our collective futures better.”

That’s the power of science.

It was on display Monday night, free of judgment or political affiliation. The way it should be.

“It’s a shame to me that science has suddenly become politicized,” Hoffman said. “It’s always been a little bit, but nothing like I’ve seen it now.”

Hoffman isn’t deterred. He said it’s the nature of the community.

“The thing about science,” he said, “is that it is filled with the world’s biggest optimists. Not because they’re dreamers, but because they are achievers.”

The annual Genius Gala always proves that — without debate.

The Genius Gala is made possible by sponsorship from some of the top individuals and companies in New Jersey and around the country, including but not limited to: