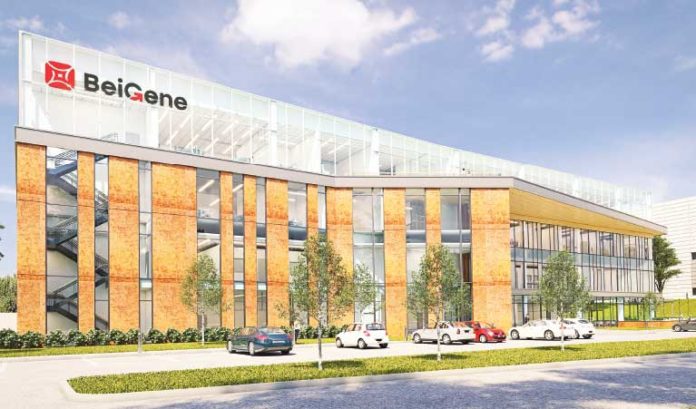 Great medicine is only great if you can get it.

BeiGene, a global biotechnology company focused on developing and commercializing innovative cancer medicines worldwide, announced last week that it plans to deliver big on that statement during the groundbreaking for its new U.S. manufacturing and clinical research & development center at the Princeton West Innovation Park in Hopewell.

State officials said the center will back up another bold statement: That New Jersey still is the “Medicine Chest of the World.”

The center is expected to include up to approximately 400,000 square feet of dedicated commercial-stage biologic pharmaceutical manufacturing, including up to 16,000 liters of biologics capacity, along with clinical R&D and office space.

And hundreds of high-paying jobs.

John Oyler, BeiGene’s co-founder, chairman and CEO, said one of the reasons the Princeton-Hopewell location was chosen was for the state’s deep talent pool — one that will allow BeiGene to expand its workforce and advance its pipeline of lifesaving oncology medications, and then provide them worldwide.

Oyler said the company is investing heavily in its U.S. manufacturing to further expand and diversify its global supply chain and build new manufacturing capabilities for its deep pipeline of biologic and drug candidates.

Oyler, a man described as having an incredible commitment and passion to fighting cancer, said no one can fight the disease alone. He believes that the only way to do so is for the industry, academia, advocacy groups, health care and government to all get their efforts together and fight it as a team.

An emotional Oyler expressed his appreciativeness toward all the partners that brought BeiGene’s vision into a reality.

“This is a big step in our U.S. and global expansion,” he said. “It is a culmination of years of work and a really important chapter in continuing the global growth and success for BeiGene that started 12 years ago when we set out to build a new model for the biotech industry — one that would enable BeiGene to create innovative medicines and also improve access and affordability for all patients, regardless of location or socioeconomic status.”

Despite all the tremendous breakthroughs there have been in cancer research, Oyler said roughly 10 million people die from cancer globally every year. Even within New Jersey, there are 55,000 diagnoses every year.

“This is what motivates us,” he said. “And this is why we come to work and fight hard every day. There are no competitors in fighting cancer — only collaborators.”

One of those collaborators is Hopewell Mayor Courtney Peters-Manning, who said she knows BeiGene is a big part of Hopewell’s future. She touted the township’s attributes, its rich history and now its promising future as BeiGene begins its development.

Peters-Manning said Hopewell prides itself on being a responsive local government, committed to its residents and taxpayers, and looks forward to working with BeiGene for many years to come.

In addition to the commitment BeiGene is making to the township and state of New Jersey, it is also committing to be actively involved, and promises to be a great corporate citizen, according to Michael Schoen, senior vice president, business operations, for BeiGene.

“Given its mission to save lives, BeiGene always operates in a way that mitigates its impact on all communities where it operates, and it will do so to the highest ethics, integrity and operational excellence, but also with the highest standards of environmental stewardship,” he said.

Schoen said it is something the company prides itself on. He said he believes BeiGene colleagues will be an incredibly valuable addition to Hopewell and the surrounding communities, and is looking forward to bringing even more employees to the community.

U.S. Rep. Bonnie Watson-Coleman (D-12th Dist.), a cancer survivor who lost both of her parents to cancer, said she was excited that BeiGene has made her district its home.

“Having BeiGene invest here is music to my ears,” she said. “The fact that it is committed to the level of excellence and inclusivity that it is, is a reason I got into government in the first place.

“Good investments into cancer research, especially in my own district, which is known as the Medicine Cabinet of the World, is not only valuable to the community and the economy, but to the world, and to saving lives everywhere.”

Gov. Phil Murphy said the groundbreaking is the type he has had in mind since he first sought office more than five years ago.

“We wear your presence in our state as a badge of honor — period,” he said. “When people say ‘New Jersey,’ the two attributes that immediately come to mind are talent and location. And BeiGene has them both in the Princeton-Hopewell location.”

BeiGene, which has in office in Ridgefield Park, has four other offices in the country: In San Mateo and Emeryville, California, Cambridge, Massachusetts, and Fulton, Maryland. Globally, the company has more than 30 offices across five continents.

BeiGene officials said the company is committed to advancing hematology, immunooncology and targeted therapies in order to bring impactful and affordable medicines to patients across the globe. The company has a growing research & development team of approximately 2,900 colleagues dedicated to advancing more than 100 clinical trials involving more than 14,500 patients and healthy subjects.

BeiGene’s portfolio is directed by a predominantly internalized clinical development team supporting trials in more than 45 countries or regions.

Colliers facilitates the highest price per sq. ft. office trade in Parsippany within the past 5 years