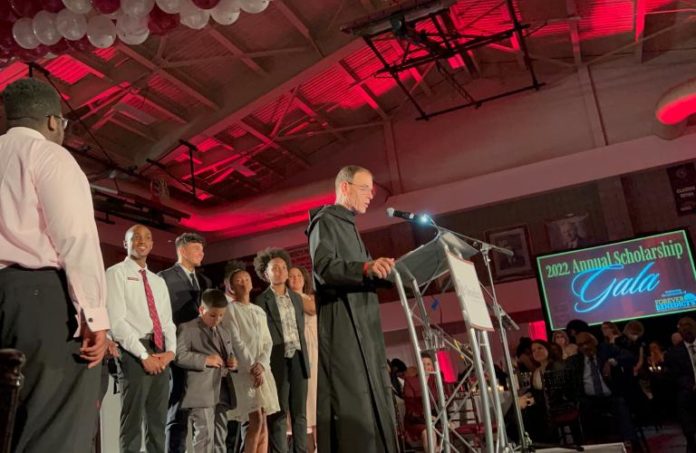 Father Edwin Leahy, the headmaster at St. Benedict’s Prep, still can recall the reaction he got four years ago, when the school announced an incredibly ambitious fundraising campaign drive called Forever Benedict’s.

“People looked at us as if were out of our minds and thought it was impossible,” he said.

At a time when private schools across New Jersey and around the country are struggling to stay open, it seemed to be an overly lofty ask.

Not at St. Benedict’s Prep.

The school, which has been working wonders in Newark for more than 150 years, was undeterred. Thursday night, at St. Benedict’s annual scholarship gala, Leahy announced the school had not only reached the mark, but raised an impressive $108 million.

The Forever Benedict’s fundraising drive will continue until June 30, the end of the school’s fiscal year.

To learn more about the campaign and how to contribute, click here.

“This evening, I’m back standing before you, full of gratitude for all the teammates who have participated and to say, ‘Thank you,’” he said. “Thank you to all of you. Thank you to teammates around world. You did it. We did it for the sake of the city.”

It was an inclusive initiative that drew investments at the multimillion-dollar level as well as thousands of gifts ranging from $25 to $100. Funds raised from the campaign have directly impacted teaching, learning, as well as the spiritual and emotional growth of students at the school.

Now a K-12 Catholic school with nearly 1,000 young people from Newark and its surrounding communities, St. Benedict’s provides financial assistance to 85% of Middle and Prep Division students each year. Even as enrollment has grown 28% over the past five years, so has the need to support Benedict’s students and families.

In addition to sustaining financial assistance, the comprehensive campaign enriched academics, the arts, athletics and extracurriculars, helped the school pioneer a growing Girls Prep Division that began in 2020, doubled the endowment to $36 million and kept St. Benedict’s resilient throughout the COVID-19 pandemic.

Guided by the Benedictine monks of Newark Abbey since 1868, St. Benedict’s Prep is a model in urban education known for its student leadership, counseling program, experiential learning and community. Serving more than 900 students in K-12 from in and around Newark, the school was featured on “60 Minutes” in 2016.

The investment will support the Steven M. Grossman Counseling Center, a cornerstone of St. Benedict’s successful approach to tending to “the hearts and minds” of young people. The model school counseling program provides individual and group therapy to one-third of the student body and has introduced innovative programs like Stage Rage, a monthlong intensive course that engages students in group therapy, theater and performance during Spring Phase.

Ostrowsky said RWJBH was eager to help a school that does so much to help others.

Ostrowsky, along with retired Saint Barnabas CEO Ronald Del Mauro, a St. Benedict’s trustee, and Candace Bradsher, secretary to the abbot and annual giving officer, were awarded the Medal of St. Benedict’s, the school’s highest honor.

“Alumni stepped forward. Corporations stepped forward. Friends we didn’t even know three years ago stepped forward in enormous ways,” he said. “When people see our school, see our students and the way they conduct themselves, they recognize St. Benedict’s as a special place that is worth their donation. We are so grateful to everyone who participated because, without our donor community, this mission doesn’t happen.”