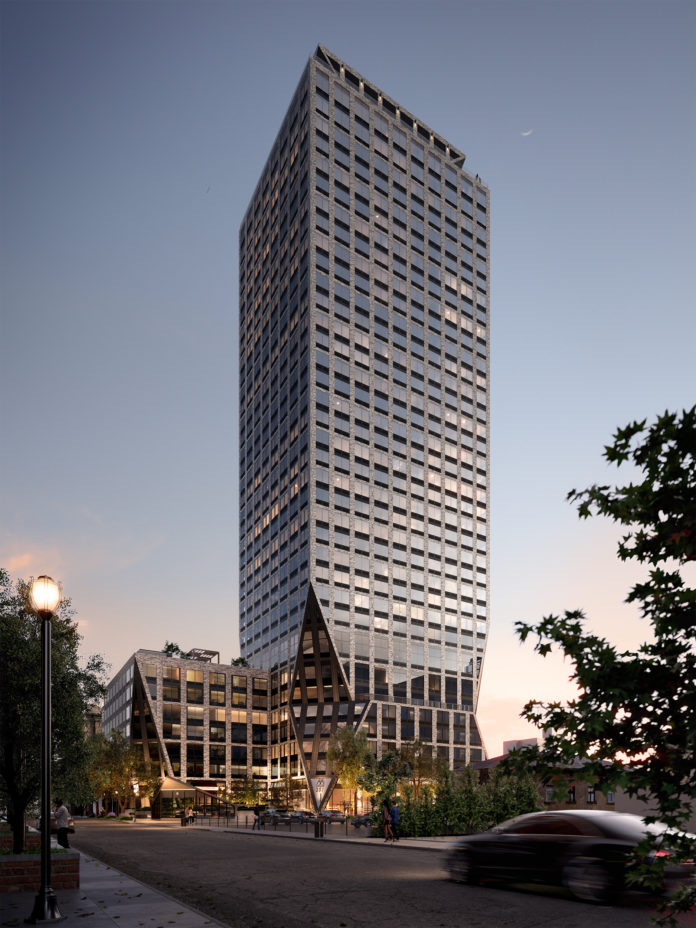 Jersey City’s 351 Marin held its ceremonial ribbon-cutting Thursday, marking the completion of a significant addition to the city, according to an announcement from developers Kushner Real Estate Group and Northwestern Mutual.

Jersey City Mayor Steven Fulop joined the partners to celebrate the new 38-­story tower with 507 residences in Jersey City’s lively Powerhouse Arts District — all of which leased up in just five months, according to the Marketing Directors, which oversaw the leasing program.

The celebratory event took place in a new 4,500-square-foot, landscaped public plaza that features a pavilion and fountain display. The community space leads directly into 351 Marin’s lobby and the newly opened Wattle Café, an Australian-inspired wellness health brand known for crafting food with a healthy spin.

“When we took office, we really had a pro-development stance because we recognized that a healthy city is a growing city,” Fulop said. “You just need to look around us right here at 351 Marin, and there aren’t many cities in the state that can absorb two 50-story buildings going up across the street from each other simultaneously and, at the same time, a crane half a block away creating another building of similar size.”

“351 Marin continues our longstanding commitment to Jersey City through developments that provide first-class residences, public amenities and neighborhood retail services near mass transportation,” said Jonathan Kushner, president of KRE Group. “We’re proud to have once again delivered a building that has successfully attracted residents to the area at an historic rate while also building on the unique character and energy Jersey City is known for.”

Aptly named after its address at 351 Marin Blvd., the building is just minutes from the Grove Street PATH station and Hudson Bergen Light Rail system, and near commuter ferries with service to Lower and Midtown Manhattan. The new residential offering lies between Jersey City’s Hudson River waterfront, the growing theater and gallery scene within the Powerhouse Arts District, and the exciting dining and nightlife lining the Newark Avenue Pedestrian Plaza.

Designed by Hollwich Kushner and HLW Architects, 351 Marin features a distinctively angled base that creates a dramatic backdrop to the plaza, and a free-standing pavilion. The façade rises to a geometric crown that stands out among the Jersey City skyline and harkens to the triangular forms 38 stories below on the public plaza.

A mix of studio, one- and two-bedroom apartments boast open layouts loaded with upscale features. Residents enjoy a full suite of modern and thoughtful amenities highlighted by a 37th-floor Sky Lounge with coworking spaces, banquette seating and a tiered theater. An outdoor, landscaped patio provides spectacular views of the Manhattan and Jersey City skylines.