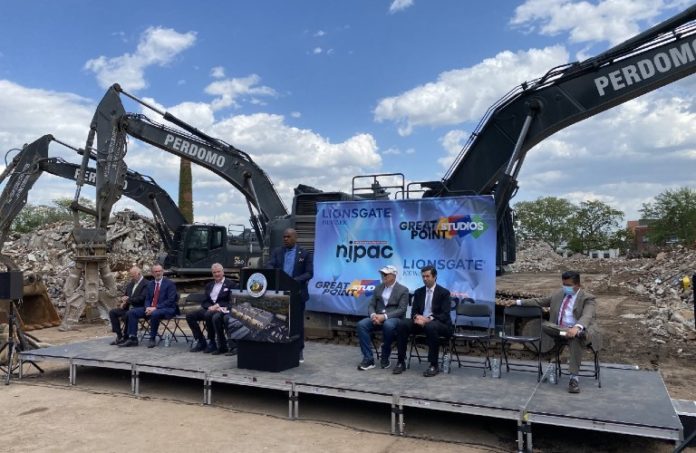 It’s easy to talk about the basic return on investment of Lionsgate Newark Studios, the massive TV and film production facility coming to Newark that was announced Tuesday afternoon … how it will have six stages, including two of the biggest on the East Coast … how it has the potential to be filming three television series at the same time, a 24/7 operation that could mean thousands of jobs … how the studios, which aim to be ready by the end of 2024, put New Jersey in a perfect position to capture the explosion of content needed to fuel the streaming era … and how the tax incentives the state passed were the defining reason that Great Point Studios decided to plant a flag in New Jersey (and we do that here).

Gov. Phil Murphy called it the state’s if-we-build-it-they-will-come moment. But it has the potential to be so much more than that for the neighborhood in which it sits.

Nestled between Weequahic Park to the back and Frelinghuysen Avenue in the front, the planned studios represent the hope of bringing the South Ward back to what it once was: a vibrant center of commerce and community in the Brick City.

It’s why John Schreiber, the CEO of the New Jersey Performing Arts Center — a position already overwhelmed with the duties of running the state’s premier anchor cultural institution while helping to build out an arts and entertainment district around it — was so eager to add master developer of this project to the organization’s list of duties.

“What it means to be an anchor cultural institution is that you’re a catalyst for economic development,” he said. “The plays and performances that we put on our great and at the heart of what we do. This is an opportunity to do more.”

The 15-acre plot, which will include a set aside for housing, figures to bring not only jobs to the area, but the ancillary businesses needed to support the facility.

And, while Schreiber may have been the first one to have the vision of such a project — he said he first reached out to production companies a decade ago when he took the CEO job — he credits NJPAC board member Marc Berson for finding the site.

Berson, long known as a developer, entrepreneur and philanthropist for Newark as the founder and chairman of Fidelco, pitched the area to Schreiber when the Seth Boyden housing project on the site was scheduled to be taken down.

Then and now, Berson sees the potential community impact this project could have.

“I think this is right up there with the arts center and the arena,” he said. “It’s going to have star power for Newark and serve as another anchor.”

One where investment returns are measured in more than dollars.

“Mayor (Ras) Baraka set goals several years ago to do projects outside of the downtown,” Berson said. “He wasn’t against the downtown, but he wanted to bring projects out of the city center. This is why.

“The Weequahic section of Newark is still a full community. I would like to think that this will bring back investment in the community and that the residents are going to be full participants.”

She pictured kindergartners getting their first exposure to the industry, grade-schoolers learning about all of the facets of the industry and high-schoolers getting an opportunity to participate in it, setting up lifelong career opportunities.

Doing it all, while never leaving the square radius of where they were born and raised, Ruiz said.

Baraka thanked Great Point and Lionsgate for being willing to cast their lot with the city, helping to transform an area that Baraka said so desperately needed to be transformed.
Baraka said one of his biggest goals as mayor was simply to tear down Seth Boyden — the city’s oldest housing project and one that he said had had many “difficult days.”

He told city officials, “Let’s just knock it down.”

And, while Baraka said he didn’t have a plan for its next use, he was confident its demolition would key a rebirth to a community that not only had a residential base but was just minutes away from Newark Liberty International Airport and all of the main roadways of the city and state.

“This is a beautiful community, a community that was overlooked, underappreciated and definitely underinvested in,” he said.

“By God’s grace, and all the great work that these folks are doing, this community will come alive again. There’ll be people from all over the world taking a plane to Newark airport, finding a way to the studios and the Seth Boyden complex, and seeing how incredible Newark is.”

Baraka thanked Schreiber for leading the way, saying his efforts to get everyone to the table and getting them to bring the same sense of urgency was key.

Schreiber returned to the compliment to all the participants.

“This is why I love Newark,” he said. “I love the amazing collaborative spirit that exists when there’s a good idea. Folks want to make that happen.

“We could never have done this on our own in a million years, but there’s a lot of smart people around here who want to do good things. This is a result of that.”

Murphy laid claim to the state’s history of film production, noting that Thomas Edison created the first motion picture in a lab in West Orange, just a few miles from where he was standing.

The future of the industry, he said, looks very different than it did on that day.

Murphy feels New Jersey is now uniquely positioned to be a leader in an industry that is quickly changing how television and motion pictures are filmed to meet an insatiable demand of so many outlets. The state, he said, not only is in the early stages of building production facilities throughout New Jersey, it’s getting rave reviews from those who film here, including, Murphy said, from Steven Spielberg, who recently shot “West Side Story” in Paterson.

All of this led to Tuesday and the monumental announcement. Call it Newark’s South Ward story.

At N.J. Pride Chamber gala, a celebration of success — and...