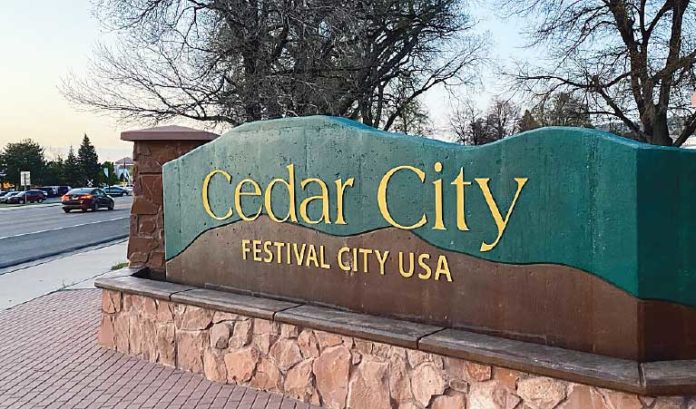 The Grind Coffeehouse Café in Cedar City, Utah, is just what you would expect to find on Main Street in Anytown, USA.

Or, at least, what you may have expected to encounter a few generations ago.

When you’re waiting the five minutes or so it takes to drip brew each individual cup of “the best coffee you’ll find the world,” you can enjoy some of the homemade food options or browse in the bookstore, a neighboring business that has an interior opening to the coffeehouse — because friendliness is one of the top characteristics of the town.

If you step outside and stroll down the easily walkable streets, you’ll quickly come across a sign post that lists the distances to a variety of locations, including both Zion National Park (just 58 miles away) and Key Largo, Florida (2,566 miles); a drugstore that features a throwback still-in-use counter service worked by “soda jerks” from a different era; and a plaque commemorating the fact that in 1924 — a year after Union Pacific completed the railroad — Hollywood came to film “Deadwood Coach,” the first of what became thousands of movies filmed in the picturesque area.

The town is led by retired businessman Garth Green, its 73-year-old first-term mayor who literally describes himself on the town’s website as a modern-day “Opie Taylor” and proudly recalls growing up as the son of the fire chief.

But, if you think this town of approximately 35,000 situated off Interstate 15 in Southwest Utah — a three- or four-hour drive to Salt Lake City to the north, Las Vegas to the west and the Grand Canyon to the south — is one lost in a time warp that only serves as a setting for Instagram photos, you would be overlooking what Cedar City really is: a boom town that people and companies are flocking to.

The old-school charm of the historic downtown is just one of the amenities of a small town that recently was listed as the fourth-best in the country to start a business by WalletHub.

And, while the modeling and metrics of these type of rankings always are open to interpretation and skepticism, this stat should not be overlooked: Utah had nine cities listed among the Top 25 in the under 100,000 population category — including five in the Top 10.

New Jersey, despite the richness of a suburban small-town landscape that dots the state, its geographical location and well-educated workforce, did not have any in the Top 250.

We wanted to know why.

Here are some thoughts after a three-day stay, one of a half-dozen or so I’ve made to the town in the past three years.

Chris McCormick, the CEO of the Cedar City Chamber of Commerce since 2015, is quick to point out all of the reasons why Cedar City is so good for business, rattling off a bunch of organizations and programs aligned in the goal, including a small business innovation center and women’s business center — both of which work in conjunction with the chamber and two local universities: Southern Utah University and Southwest Technical College.

When a startup, thinking about coming to the area, recently reached out to the chamber, McCormick put together a meeting that included all of the noted organizations, including some of the 363 chamber members.

“We have a group of partners in our small business development center,” he said. “They help companies develop a business plan, a marketing plan, do market surveys — anything to really help you get your feet on the ground and look at things that you might not be looking at, so that you can be successful.”

And, while Cedar City area officials are eager to help startups, established businesses — including those who see they can get product to Los Angeles and Denver in eight hours — are showing interest, too. In 2021:

Goex did so at what Cedar City officials call their Port 15 Utah facility, a 540-acre, rail-served industrial park aimed at attracting manufacturing, distribution and warehousing companies. They tout it as the “best served industrial property west of the Mississippi River.”

Green said the state is attracting companies from all over, including the East Coast.

“They love Cedar City,” he said. “They don’t like Arizona or Seattle or San Francisco, because it doesn’t work for them. But they can’t get here fast enough.”

“They come because they want quality of life.”

Green said the city has attracted companies from New York, but, to this point, it has not drawn anyone from New Jersey.

Cedar City’s economic growth stems from Vision Iron County, a 178-page document that lays out the area’s plans for 2050 and beyond. McCormick said one of the keys to the vision is that includes more than just Cedar City, which is part of a Utah network of economic development officials.

Cedar City officials work with those in Southwest Utah, including the St. George area (the 90,000-population city less than an hour away), as well as other rural chambers and the state chamber.

The state itself has numerous programs to help, including one that will pay up to 40% of training costs if a company wants to come to Utah but needs to train a workforce upon arrival.

Of course, the best number comes at tax time.

Utah, one of 14 states to have a AAA bond rating, also has one of the lowest corporate business tax rates, at 5%. The state income tax is less than that.

And Utah did not need to borrow during the pandemic. In fact, the state actually added to its rainy day fund — a fund that now has more than $1 billion saved. You won’t find any gimmicks in the state’s budget for 2023, which is expected to be a record $25 billion.

The state of Utah also used its own funds to replenish the unemployment insurance fund, rather than making businesses pick up the tab, as New Jersey has done.

To be fair, it only cost Utah $100 million to replenish the fund. In New Jersey, it’s $1.4 billion – though the state recently announced a surge in revenue is bringing in an unexpected $7.8 billion.

McCormick said the state’s fiscal health impacts everything economic development groups do — and leads to a spirit of partnership.

“If we’re talking with a company that’s not a good fit for us, we work to find another area,” he said. “We want to bring companies to the state.

“We’re constantly having conversations with other groups about, how do we help each other, what are the tools that are needed, what are the things needed to help businesses grow and thrive and help our communities to be strong and healthy?”

A strong and healthy community. That’s what Cedar City officials pitch to companies.

The area’s two high schools are strong; the area hospital just got an “A” rating in the latest Leapfrog safety scores.

There are four seasons. And, unlike other areas in the state, it does not get too cold in the winter or too hot in the summer.

It’s a place for those who love the outdoors. Included in the natural beauty of the numerous national parks are trails for hiking and biking. When the World Ironman Competition, always held in Hawaii, needed a new location this year due to the pandemic, it selected St. George.

Looking for culture? Cedar City features one of the largest Shakespeare theater complexes in North America — with three theaters performing productions from the middle of June to the middle of October.

And McCormick said the population is filled with many who have traveled outside of the area (often on religious missions) and know numerous languages. He called it an unexpected plus for businesses coming to Cedar City.

All this being said, Utah is as red a state as New Jersey is blue. That leads to differences. Major differences.

Looking for diversity? You’ll struggle to find it. Essentially five in every six residents are white.

Looking for acceptance? Well, the local university does have a Pride Alliance, dedicated to supporting LGBTQ+ students. But acceptance of what some call “alternative lifestyles” or thinking is not what you might think. One billboard on Interstate 15 featured an organization aimed at assisting “plural families” (it’s what you think); another did not just question evolution, it put a line through the idea while promoting creationism.

MoBettas, a fast-casual dining chain that specializes in Hawaiian food and was started by two brothers from Oahu, opened a Cedar City restaurant the weekend I was there.

The store is on the outskirts of town and would not be considered walking distance from the historic section of town, the university and most of the housing — although, to be fair, it’s only a mile or two from all of that.

The restaurant, which features surfing décor in a city and state that is more than 400 miles from the Pacific Ocean, now has 30 locations in the chain — and 24 are in Utah.

“It’s just a great place to open a business,” the store’s rep told me out front during their soft opening.

McCormick and Green are not surprised.

McCormick said he knows some of the reasons why.

“Not only do we have a very educated workforce, we have a very highly motivated and ethical workforce,” McCormick said. “And this is one of the biggest volunteer areas I’ve ever seen. The people that come here really buy into that culture of, ‘Let’s help our neighbor.’”

McCormick and Green both say the city and state sell themselves. They said the WalletHub ranking that led to this story also will lead to business inquiries.

“We haven’t had to work really hard to attract companies for the last several years,” he said. “The accolades that are being printed in papers and websites all across the country are making people come to us and say, ‘We want to look at what you have to offer.’”

It’s up to you to decide if this is appealing.