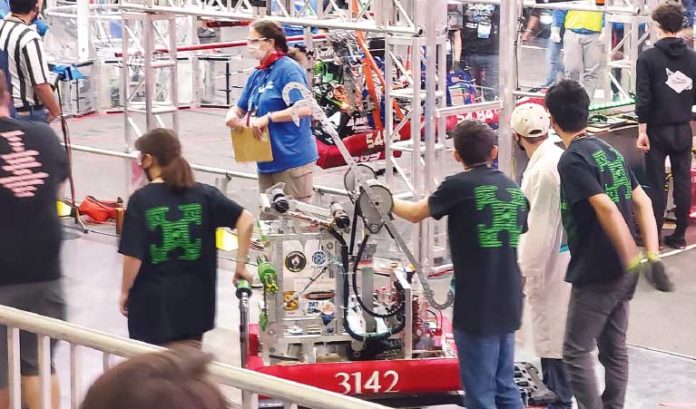 Jim Hofmann brought a few of his students from Newton High School to the State of the State of Manufacturing, an event sponsored by the New Jersey Manufacturing Extension Program earlier this month in Trenton.

Hofmann, who has led the robotics team at the school the past 13 years, was like any proud teacher: He was eager to tell business owners and legislators about the kids who helped the school advance to the World Robotics Championship in Houston earlier this year.

But, what he really wanted to do was this: introduce these business owners to their future employees — or, perhaps, their future competition.

At a time when seemingly every employer is looking for qualified employees — especially those in the science, technology, engineering and mathematics space — Hofmann said robotics programs across the state are developing just what those companies are looking for: hard-working students with in-demand STEM skills.

“I would venture to say that probably 90% of kids who enter the program and stick with it for four years will wind up either owning, running or managing a business because of all the really good skills they learn along the way,” he said.

Hofmann said robotics is about more than just building machines that crash into each other (that just makes for good television).

Yes, the clubs do have to build a moving robot — but this year’s competition involved teaching it to shoot a ball onto a platform and climb up levels.

And, while Newton was fortunate enough to score enough points during local and regional competition to advance to the ultimate competition, the lessons learned along the way were more important.

Hofmann rattled them off.

“Robotics teaches them all the basic engineering skills: how to design, work with motors and electronics, build with metals (mostly aluminum) and work with 3D modeling (including SolidWorks and Fusion 360 software programs),” he said. “If the kids can think it and draw it, they can bring it to life.”

And do it by using skills more associated with work than school.

“They have to learn how to procure parts from commercial vendors,” Hofmann said. “That means they learn about supply chain and issues associated with that. And, when we went to Houston, they learned about logistics. We had two pallets of items that had to get there by plane. They had to figure out how to do it.”

And, when parts break — and they do, Hofmann said with a laugh — the kids learn what it takes to repair or replace.

Then, when they get to competitions, they need to bring out their public speaking, team building and marketing skills.

“In the competition, you are paired with teams from other areas, so you have to learn to work together,” he said. “The kids have to talk to the judges and explain what they did and how they did it. And a lot of teams bring media — websites, videos. Marketing your robot is a big part of this.”

The good news? They are not doing this on their own.

In addition to the guidance of Hofmann, a teacher in Newton for more than three decades, the team has received help from a few local companies, including ThorLabs and TechFlex.

“ThorLabs made parts for us,” he said. “It was a really cool experience for the kids. They designed it, sent them their sketches through email and, a week later, we got parts back.”

This is the real reason Hofmann brought some kids to MEP’s manufacturing event.

“I want to get the kids in this network,” he said. “I wanted them to meet and talk to as many manufacturing companies around the state as they could. I wanted the kids to see all the possibilities.”

He wanted the manufacturers to see that help is on the way.

Employers, of course, can start the relationship — and the training — now. Time, money — or both — is welcomed.

Hofmann said he is eager to speak with any company or legislator who wants to help. And he noted that Senate Minority Leader Steve Oroho (R-Sparta), who represents Newton, sponsored a bill that would bring pilot programs for robotics to schools. (The bill was passed, but has not yet been funded.)

Hofmann also encouraged leaders to reach out to schools in their own areas. There currently are 88 schools in the state with a robotics club — and there could be more if more folks stepped up with funding.

“Robotics teaches kids so much,” he said. “I’d love to have a chance to show anyone what these kids can do.”

Reach First Mid-Atlantic, which works with all schools with robotics clubs in New Jersey, Delaware and Eastern Pennsylvania at: midatlanticrobotics.com.