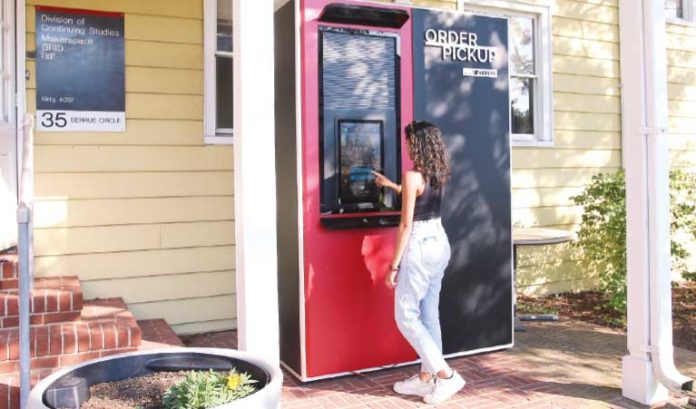 Let’s say you are Rutgers University, and your makerspace has become an integral resource for the development of student projects and faculty inventions. It’s essential that it be responsive to the research needs of the university. Then, COVID-19 strikes. For safety reasons, you can’t open the makerspace to students, faculty and others who need it. But the research and projects still must go on. What’s your solution?

In this case, the makerspace turned to Aersys, based in Piscataway, a startup formed by college students from across New Jersey. The company installed a contactless pickup terminal at the Rutgers Makerspace, with plans to integrate drone and rover delivery in the coming years.

NJTechWeekly.com spoke to Vallab Nayak, co-founder and CEO of Aersys, to catch up on the startup’s progress since the company appeared at a TechLaunch BullPen event representing Rutgers as a student entry.

When Aersys first began, it was focused on autonomous last-mile delivery using drones, Nayak told us. But, after going through the National Science Foundation’s Innovation Corps (I-Corps) program at Rutgers, and doing a lot of customer discovery, he said, the team realized that “the industry wasn’t there yet.”

Nayak admitted that, at first, the company had a tough time in the I-Corps program.

“The focus was getting as many customer interviews as possible, and we struggled in the beginning. In the five weeks of the program, we learned the  right way to interview a customer and how to get unbiased feedback from them,” he said. “Now, we do customer discovery interviews constantly. I’ve done hundreds of interviews at this point. Every time I walk into a retail store, I talk to the manager. And so, it just becomes a habit, because every bit of information you get helps us understand the market better.”

As a result of the I-Corps experience, Nayak and his team learned an important lesson: “It made more sense for us to focus on retail, especially during the pandemic, as retailers were doing more curbside pickup. Smaller retailers were having trouble automating this.”

Nayak noted that a big company like Amazon can automate stores and warehouses at will, but this technology is unaffordable and takes up too much space for small retailers.

“(At big companies), these are expensive, complicated projects that will take as long as 18 months to implement,” he said. “Often, you’ll have system integrators like Honeywell get involved. And maybe Walmart can manage to operate in this environment, but not a small retail chain. Rather than try to turn every retailer into a tech company, we need to change automation, instead, and just make automation more consumer friendly.”

The Rutgers Makerspace was eager to help the company develop its prototype and pilot its product, Nayak noted. The team was able to work in the space essentially for free while it implemented its project.

This was the problem Aersys had to solve: During the pandemic, the makerspace hours were cut, and only one or two staff members were allowed inside the building, Nayak said. Normally, students would go in and work on their projects, 3D printing things, laser-cutting things, fabricating parts. Now, the staff had to make the items for the students, but the students weren’t allowed inside the building to pick them up. The makerspace needed a place where the students could pick up their items safely and quickly, without much intervention from the staff.

The team found out about the Rutgers problem because it had been using the makerspace itself before the pandemic.

“We were kicked out, too. We were already working on this device for retailers,” Nayak said. “We realized this was a perfect opportunity for us to prototype our device and also help out the makerspace.”

And that they did, after testing it exhaustively. That device eventually became Aersys’ flagship product. Called “AerNode,” it’s described by the company as a “modular robotic storage and retrieval system that lets retailers offer automated 24/7 curbside pickup and returns.”

Nayak told us how it worked at the time: “Students ordered items online. We created a portal where they could do that for the makerspace, and we were able to do it quickly, since we had a software team ready. Students could upload their 3D files or whatever instructions they needed to upload. And then, as the orders were ready, the makerspace staff would put those items into this device. And then, the device would send out notifications saying that the order was ready for pickup. Students could come to the device to put in their PIN and receive their work.”

Nayak recalled that finishing the prototype in the middle of the pandemic was a challenge.

“For us, building the device was difficult because this is a prototype, and we didn’t have the production equipment,” he said. “And then, we were outside. We didn’t have access to all our tools, and it was snowing for most of the time we were setting it up. But, in terms of keeping the unit operational, we did almost nothing on our part. We just had to keep an eye on it to make sure nothing went wrong. There were one or two times where we had to go in and make some small adjustments, but, aside from that, the system has been running itself. Now, after a successful nine-month pilot, we’ve taken it out of service to do some updates on components and make it more reliable, so that we no longer must actively monitor it.”

Rutgers was very happy with the results of the prototype, according to Daniel Hayden, a manager at the Rutgers Makerspace.

“Aersys was critical in allowing the makerspace to continue operations to support research and students during the pandemic,” he said. “The AerNode allowed us to quickly transition to completely touchless pickup of 3D prints by our customers and stay compliant with regulations to ensure safety during COVID-19 shutdowns.”

The team began building its production version early this year and is currently fundraising. The startup had raised an undisclosed amount in a pre-seed friends and family round.

“We’re going to set up a new facility here in New Jersey. We need 5,000 square feet of industrial space,” Nayak said. “And the equipment that we will put there will allow us to go into low-volume manufacturing, right at the facility.”

Nayak noted that the team had visited the Boston area to look at the thriving robotics industry there. During that trip, they visited MassRobotics, which is the largest coworking space for robotics in the country.

“They were trying to entice us to come to Boston, and it was very tempting because the community is there,” he said. “There are a lot of resources for startups, particularly hardware and robotic startups that we just haven’t seen in New Jersey. New Jersey is more focused on life sciences or finance. We spent the weekend talking about it, debating, should we move or should we stay here? I think most of the team wanted to stay here and help build the tech and robotics ecosystem in New Jersey.”

One of the ideas the team had was to open the manufacturing space to other robotics startups in an effort to bring similar startups into the area and help create a robotic startup hub.

He knows that the decision to manufacture itself is a controversial one.

“A lot of startups will choose to outsource the manufacturing, and we’ve intentionally chose to do it ourselves because we noticed that we learn a lot more about the product and how to optimize different components by doing it ourselves,” he said. “We can iterate very quickly. As soon as we find a problem or a way to improve, we can do it the next day, instead of waiting for suppliers or going through the process of negotiating every little change.”

Tech Trends: An interview with Rachel Lyubovitzky, whose startup, EverythingBenefits, was...