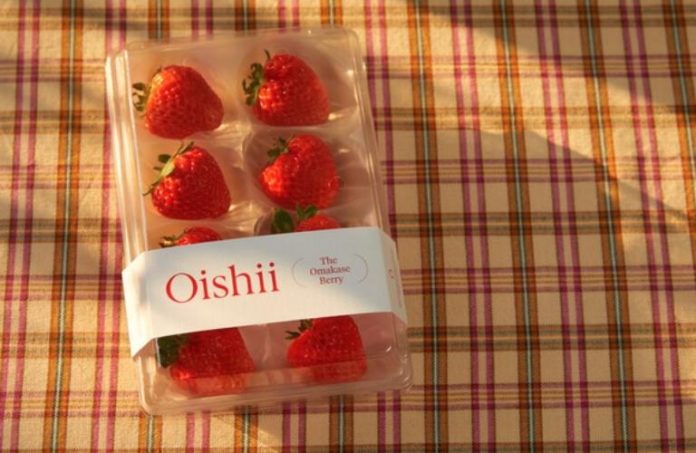 Oishii, whose vertical farm-produced strawberries have become a sensation in recent years despite their exorbitant price, announced Thursday that it has opened a 74,000-square-foot, state-of-the-art facility in Jersey City.

The company said the facility, its largest and most technologically advanced farm yet, will help it meet the growing demand for its famed Omakase Berries — and do it an environmentally friendly way.

It also will help the company dramatically lower the price of its in-demand product: from an incredible $50 for a tray of eight large (or 11 medium-sized) berries to just $20.

Oishii, which means “delicious” in Japanese, is an innovative company transforming agriculture through vertical farming. The company says it has harmoniously married nature with technology, recreating the elements — rain, air, heat, light, and nourishment — to create the perfect fruit every time, all year round. Oishii is known for its Omakase Berry, a special Japanese strawberry variety grown pesticide-free in the company’s vertical farms located just outside of Manhattan and in Culver City, California.

Oishii officials said they are passing along the savings that will come at the facility, which was formerly an Anheuser-Busch factory. Each harvest, which relies on advanced robotics and automation, will use 60% less energy and 40% less water than first-generation technology.

“At Oishii, we are committed to revolutionize the future of food by offering the best-tasting produce, grown in a way we believe is better for people and better for the planet. Today marks an important step in making good on that promise,” he said.

“We’ve worked hard to pioneer advanced technology that unlocks a substantially more efficient way to grow our unrivaled strawberries. Our largest farm yet pairs the next frontier of indoor farming innovation with the care and precision of centuries-old Japanese farming techniques.”

Oishii first introduced the Omakase Berry in 2018. It quickly caught the attention of both Michelin-starred chefs and consumers for its sweetness, aroma and creamy texture, the company said.

Pricey product
(and how to order it)

The company previously made news when it asked (and got) $50 for one tray of its berries.

The company was the first to grow vertically farmed strawberries for consumers — considered to be the most sophisticated crops to farm because of their long cultivation cycles. The company perfected the fruit through its first-of-its-kind pollination method, conducted naturally with bees. The hyper-locally grown produce is farmed without pesticides and is perfectly ripe year-round.

The Jersey City facility comes on the heels of momentous growth for the company. In October 2021, Oishii made its West Coast debut with the opening of its Los Angeles farm, marking the first time Omakase Berries were available outside of the greater New York area.

The company also closed a $50 million Series A funding round in February 2021. Oishii is currently in development on new strawberry varietals, as well as other types of flowering produce and vine fruits, such as tomatoes, melons and peppers.

With demand for Oishii Omakase Berries at an all-time high, the company is expanding its retail footprint so more people can experience the coveted fruit. This summer, Omakase Berries will be available at the upcoming Whole Foods Market store opening in New York’s NoMad neighborhood.

It is unclear if the berry will be available in any New Jersey stores.