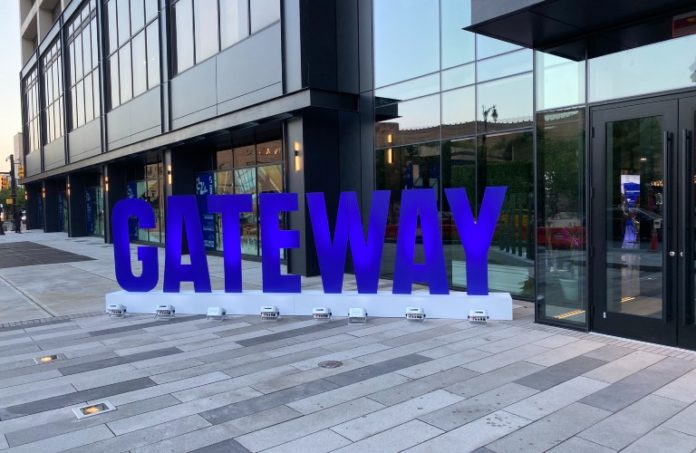 When officials from Onyx Equities announced their plans for the Jewel Box, what they envisioned as the grand entryway that would connect and open the Gateway complex to Newark Penn Station and the city itself in a way that had never been done before, there was plenty of skepticism.

Afterall, the 2.3 million square feet of office space that is Gateway had never come close to living up to its potential. It actually was designed to not connect to the city, which was viewed as being a detriment.

And, remember, the initial announcement came in December 2019 — a few months before anyone had ever used the words and phrases: COVID-19, pandemic, lockdown and work from home.

Onyx co-founders John Saraceno and Jonathan Schultz were not deterred.

They knew the four Gateway towers — three of which they had recently purchased — not only needed that connectivity to the city to prosper, but that doing so would help them be a connector for so many other properties in Newark, transforming the area around Penn Station into a destination.

Thursday night, in a gathering filled with key stakeholders in the city and state, Onyx unveiled the Jewel Box in an event that showed the great progress that has been made in the $60 million redevelopment (that was designed by Gensler).

The two-story entrance — complete with wall-to-ceiling views of Newark Penn Station — is not open to the general public just yet. (That comes June 1.) And the more than a dozen restaurants and other amenities that make up the 100,000-square-foot second-floor concourse, called the Junction, will begin to open a few months after that.

But Saraceno and Schultz said more than enough has been completed to see the impact.

“This is now real,” Schultz said. “People can now see what we always saw — that Gateway can be the connector of the city.”

And in a glorious way, he said.

“It’s just so dramatic,” he said. “This is the greatest front door a city could ever have.”

He thanked Onyx for creating a place is bringing the diversity of Newark’s business ecosystem into one place.

“Some thought (businesses) would not come to this space, but they’re here,” he said. “It’s filling up.

The impact of the pandemic on the project is undeniable, too.

The massive shift to hybrid and work-from-home work models at the start of the pandemic gave Onyx greater access to the building, allowing it to transform the entryway more quickly, because it could be done without having to work around a potential 75,000 people using the corridor on their way to and from the office.

It also allowed Onyx to add health and safety features to the building — items that never were a concern in office complexes before but now are mandatory if you want to be a state-of-the-art building.

But, while the pandemic increased the project’s building curve, it also slowed its leasing.

Saraceno said there has been a lot of interest — and plenty of leasing — but many companies are slowing the process, trying to understand their needs.

Saraceno said this was expected — and isn’t a concern.

“We were never 10% leased and burning cash,” he said. “The property has always been about 70% leased as a portfolio. It covers its operating costs; it covers its taxes. We can be patient, and we will be patient.”

Saraceno and Schultz are eager for the coming months.

The more than a dozen restaurants (including Serafina, Mökbar, Brooklyn Dumpling Shop, Fresh & Co, Greek from Greece Bakery & Café, Farinella, 375˚ Chicken & Fries, Chip City Cookies and the Brookdale) will open in various stages around Labor Day, give or take a month.

Onyx is getting close to naming which Newark-based food company will win a spot on the Concourse. A fitness component likely will be announced soon, too.

Office leasing is progressing. While a few major tenants have signed, including WebMD, there are many others in discussions for large sections in Gateway 2 and 4. Landing those likely will create a domino effect for others, Saraceno said.

Now that the Jewel Box is done, leasing only figures to get easier.

“Nobody has really seen this space in this way before,” Saraceno said. “This will make a big difference.”

“Before, we were selling people on a vision of what this could be,” he said. “Now they can see it.”

Saraceno said he’s confident the buildings will be far closer to capacity by the end of the year. He points to Newark Penn Station as one of the reasons.

“In my opinion, it’s the best and most important train station in the state,” he said. “The connection it has to the city and to New York City are incredible.”

Saraceno and Schultz were being given a lot of credit for their vision Thursday night. Neither was having it.

“We certainly believed in Newark and all the great things that are going on here — but we weren’t the first ones to have that belief,” Schultz said. “There was so much going on around here before we got here. We bought into the story. We wanted to be part of it. Now, we want to help make it be even bigger story.”

Penn Station brings the people, but the Prudential Center, the New Jersey Performing Arts Center, Rutgers University-Newark, New Jersey Institute of Technology, Panasonic, Prudential, Public Service Enterprise Group and so many other others help keep them, he said.

“So many people are buying into the story of Newark,” he said. “It’s not just us. It’s a great city. People are flocking here.”

The Gateway complex can now be added to the reasons why.

“We are truly the gateway to the city,” Saraceno said. “For the first time in a long time, Gateway actually looks good.”

As much as Saraceno is excited for what this all means for Newark’s future, he wishes he had a chance to replay one moment from its past.

When Newark made the final round of Amazon’s HQ2 competition in the spring of 2018, Amazon officials visited the Gateway Center as part of their tour of the city. The buildings in Gateway were in such bad shape that one local philanthropist paid tens of thousands of dollars just to replace some of the carpeting.

For retail leasing inquiries at the Junction, contact Jason Pierson and Ryan Starkman of Pierson Commercial Real Estate at 927-823-4800.

Would having the Jewel Box, the Concourse and the way the Gateway complex is now bringing the area together have made a difference?

“I would love to have that moment again,” Saraceno said. “Let’s bring someone like that through Newark now. Let’s bring them through this.

“I bet it would be a different outcome.”