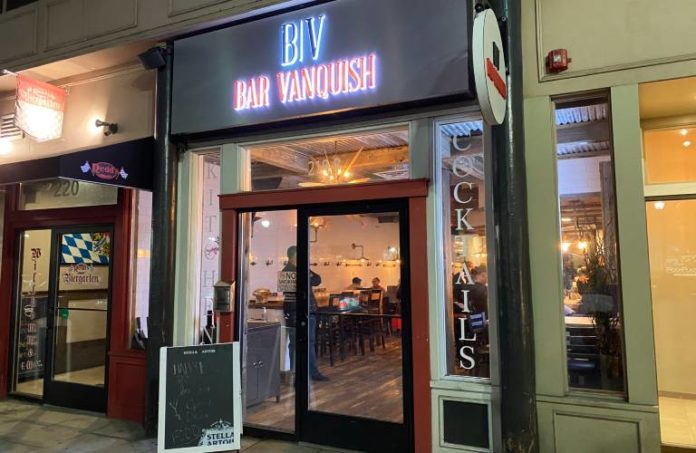 New Edition, Mary ​J. Blige and Babyface — perhaps a little En Vogue or Janet Jackson, too. In other words, all the R&B favorites you listened to growing up.

You can come to Bar Vanquish, a growing hot spot in Newark, for the food and drink. And with items such as Dirty Wings, Catfish Bites, Louisiana Oysters, Barbeque Short Rib Tacos and Lollipop Lamb Chops, you certainly should. But the owners are hoping the atmosphere they are creating will make you a regular.

They aim to make Bar Vanguish, located at 218B Market St., next to the Prudential Center, the ​bar and restaurant of choice for a mature and adult crowd — couples and singles, young and old, male or female, they say.

So said Mo Butler, the well-known public affairs specialist who is jumping into the restaurant game while maintaining his role as partner at Mercury, the head of the Casino Reinvestment Development Authority and a ​top adviser to U.S. Sen. Cory Booker (D-N.J.).

“We have all the great comfort food items, but the music is what brings everybody together and brings energy to the bar,” he said. “It will be ’80s, ’90s, even the 2000s.

“We want that R&B feel. We want to be vibrant. We want Bar Vanquish to be a great place to come to chill out and relax.”

Butler will be the first one to tell you he didn’t know anything about the bar business when he was first approached by industry veterans Glen​n Brown and Tammy L​aMorn, a married couple who brings years of experience, both in New Jersey and in the South.

The three felt Newark was missing a bar where those who work in Newark, come to Newark for entertainment and live in Newark could mix.

Last year, they took over the location held by the Noodle Bar, which did not survive the pandemic, and quickly began renovating and permitting.

“The bones were there,” LeMorn said. “We just had to customize it.”

As you enter, there is a bar on the right and a half-dozen or so bar tables on the left. As you move through to the back, there is a lower-level lounge area for additional guests. The owners already view it as a speakeasy-type area. All in, the facility can hold up to 120 customers.

In January, Bar Vanquish held a subtle grand opening. And, with little marketing — just word-of-mouth promotion — they have seen steady growth in the business.

The location, just a few doors down from the now-closed Dinosaur Bar-B-Que, has given the bar great visibility and great traffic during both games and concerts at the Prudential Center. And, while the bar is not open for lunch during the week, it has started a Sunday brunch that features Cajun Shrimp and Grits, Strawberry Shortcake French Toast and Chicken and Waffles.

From Cognac Bread Pudding, Old School Chocolate Cake and Sweet Potato Cheesecake, those with a sweet tooth will not be disappointed, Butler said.

This is a bar that prides itself on having a great variety of great food, whether it’s an appetizer, main course or dessert.

But the comfort food isn’t enough by itself, Butler said.

That’s where music from Boys 2 Men, Usher, Terence Trent D’Arby, Jersey girls Whitney Houston and Lauren Hill — and maybe a little Sade or Anita Baker, if the mood is right — come in.

Butler said Bar Vanquish is eager to take it up a notch, too. A DJ comes in every Wednesday night to increase the volume, and the group is discussing live music nights.

LaMorn said BV is eager to serve a variety of guests. It can serve as a spot for a private or corporate party — something it already has done a number of times in the lower-level lounge area.

The key, LaMorn said, is getting the word out — both to the corporate community and the residential neighborhood nearby.

“We feel we have the vibe that Newark needs,” she said.

It certainly has the rhythm.