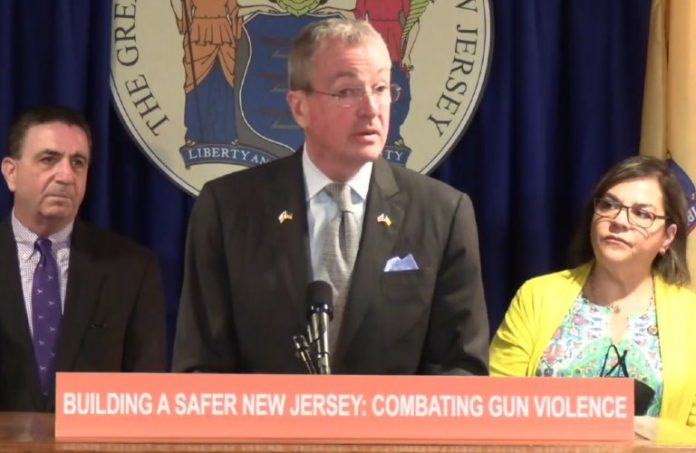 Hearing Gov. Phil Murphy speak passionately about increasing gun laws is not unusual — it has been a key issue for him since he was first elected in 2017. Calling out specific members of the Legislature to state their position on certain issues is another.

Murphy, in a short but passionate speech Wednesday, given 24 hours after at least 19 children — mostly fourth-graders — were killed in a school massacre in Uvalde, Texas, encouraged state Sen. President Nick Scutari (D-Linden) and Assembly Speaker Craig Coughlin (D-Woodbridge) to bring a package of laws called Gun Safety 3.0 up to a roll call vote.

He then went after specific legislators — all Republicans — asking them to defend their positions.

“In the face of mass shooting after mass shooting throughout our nation, in the face of children being slaughtered to the point where the reports indicate these beautiful children were unrecognizable, I say let these folks come out from behind their press releases and their tweets and cast votes before the residents of this great state.

“Let the people of New Jersey see who votes ‘yes’ to saying that churchgoers should be able to take their guns to services, as Sen. Mike Doherty wants.

“Let the people of New Jersey see who votes ‘yes’ to allowing anyone — anyone — to carry a concealed gun, as Sen. Durr and Assemblyman Ron Dancer want.

“Let the people of New Jersey see who votes ‘yes’ to repealing our red-flag law and letting those known to have made violent threats, including domestic abusers, unfettered access to as many guns as they want … as Sen. Durr wants.

“Let’s put every gun bill up, so the people of New Jersey can see, in no uncertain terms, who supports common-sense gun safety and who wants New Jersey’s streets and communities to be flooded with guns.

“Let’s see who the gun lobby banks on with their blood money.”

The Republican officials did not immediately respond to the speech.

Murphy, who was joined by some legislators, spoke passionately about gun issues less than two weeks ago — when shoppers were gunned down in a grocery store in Buffalo — and said he’s had enough.

Murphy said he wants the Legislature to vote on bills he says will: