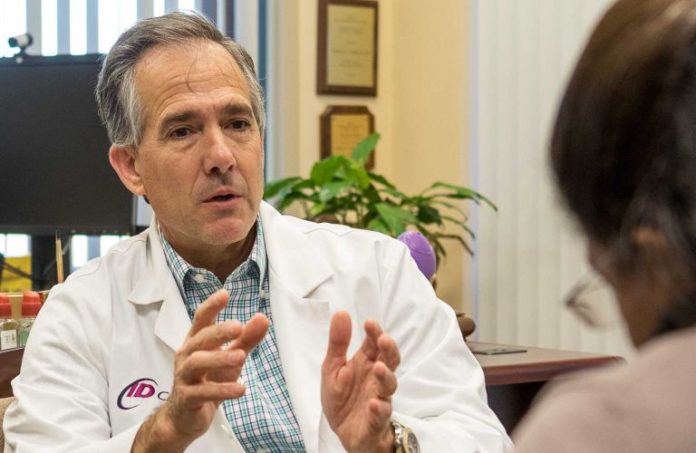 And he remembers how so many folks thought this was a new virus — and feared it was the next great virus to paralyze the globe.

Neither belief is accurate, Nahass said.

“We’ve been dealing with monkeypox for 15 years,” he said. “Everyone believes it to be new, but it’s not new. And it’s not very transmissible.”

Monkeypox, in fact, was discovered in 1958 in Africa, where it mainly has been since. It received a little bit of notoriety in 2003, when about two dozen cases were discovered in the U.S. But that quickly ended.

And, while some 200 cases of the virus have popped up outside of Africa (in 20 countries and seven U.S. states) in recent weeks, the veteran doc remains confident that this small amount of community spread is not something to be worried about.

“When my infection prevention nurse called me and said, ‘The next germ in the media cycle is here,’ and told me it was monkeypox, I said, ‘They should really be talking about something else,’” he said.

“I’m not really worried about this.”

Even though monkeypox is in the same family as smallpox.

Nahass said the virus’ low transmission rate — well below 1.0 — and the fact there is little evidence of human-to-human transmission, gives him confidence.

“This is not something that we’re running around trying to create a response plan for,” he said.

Nahass gave ROI-NJ a number of insights on monkeypox. Here’s a look at the conversation, edited for space and clarity.

ROI-NJ: What gives you so much confidence that monkeypox should not be a concern?

Ronald Nahass: There was an outbreak in the U.S. back in 2003 tied to the transportation of exotic animals from Africa to the Midwest. That was when the infectious disease community became pretty aware of this virus, its resemblance to smallpox — and what the implications were or were not of this virus.

What we learned at the time, was that — for at least that strain of the virus, because you have to say that — it really was not readily passed from human to human. Before it was truly recognized as to exactly what was occurring with that outbreak, a fair number of health care workers in various facilities were exposed without really any protective equipment. And there wasn’t any transmission from person to person, so we know it’s distinctly different than what everybody’s experienced with COVID-19.

ROI: Smallpox? That sounds alarming. Tell us more of the connection?

RN: There’s cowpox, there’s monkeypox, there’s rabbitpox, there’s smallpox — and they’re all basically closely related viruses. The good news about monkeypox is that the vaccine that is needed already has been stockpiled by the U.S. government — for smallpox. And that vaccine is somewhere around 85% protective for monkeypox. So, folks who have been vaccinated for smallpox are probably reasonably protected for monkeypox.

ROI: So, I guess we all should get a smallpox vaccine just to be safe?

There’s been some discussion about releasing some vaccine from the stockpile, but I don’t know where that stands and haven’t heard anything more than what I’ve read. But, again, I’m not concerned. I’m not aware of a case yet being reported in New Jersey or a suspicious case being evaluated yet in New Jersey.

Chickenpox and monkeypox: No relation

Monkeypox is from the same virus family as cowpox, rabbitpox, even smallpox. But not chickenpox. So said Dr. Ronald Nahass, an infectious disease specialist.

“It’s a totally different class of virus,” he said. “So, chickenpox, although it’s a quote, unquote ‘pox,’ is not actually related to these pox viruses that are now in the news.

It’s why the chickenpox vaccine, which everyone was mandated to get, will not help against monkeypox.

“It will not work for it. Period. It’s a totally different virus. It would be like giving the COVID vaccine for monkeypox. It wouldn’t work at all.”

ROI: What would make you concerned?

RN: There would have to be spread at a level that defies its mode of transmission. Everyone has become familiar with the R naught or the transmission rate, because of COVID-19. The R naught of COVID is probably north of 10. Maybe very close to measles, which is supposed to be the most contagious virus known to humans. It has an R naught of 15. With monkeypox, it’s far below 1.0, which means it can’t sustain an outbreak. It means that one person causes less than one infection.

So, it would have to demonstrate a pattern of transmission that shows it could develop into an epidemic. I just don’t foresee that happening. The biology of the virus is such that you wouldn’t expect that. Viruses mutate. We all know that. But the monkeypox virus actually would have to mutate significantly to develop capabilities for easier transmission.  And that’s not likely to happen here.

ROI: You say, ‘here.’ Why is that. We saw with COVID that it could go anywhere; why couldn’t that happen with monkeypox?

RN: Certain viruses or germs have endemic patterns of transmission in different regions of the world. For example, Lyme disease in New Jersey is endemic. It’s not transmitted from person to person, but it’s transmitted from deer to ticks to humans. It’s endemic here, but it’s not endemic throughout the United States or throughout the world. And that has to do with the weather, the climate, the animals that are here. That’s true for almost any virus that doesn’t have the kind of respiratory transmission that we all saw with COVID.

Malaria is endemic in Africa, because the weather and the mosquitoes that exist there allow it to be easily transmitted there. Monkeypox because of its nature within certain animal populations that reside there, is endemic there, but it doesn’t really survive outside of that continent. So, I think that you just know that certain diseases are endemic in different parts of the world.

ROI: So, if you get call this weekend that there is a case of monkeypox in New Jersey, you wouldn’t panic?

ROI: So, then, why did this get so much attention?

RN: That’s a great question. It’s incredible to me how the news cycle works with all these ‘germs de jour’ as I call them.

This is just something created by the media, maybe because it has a very interesting name.