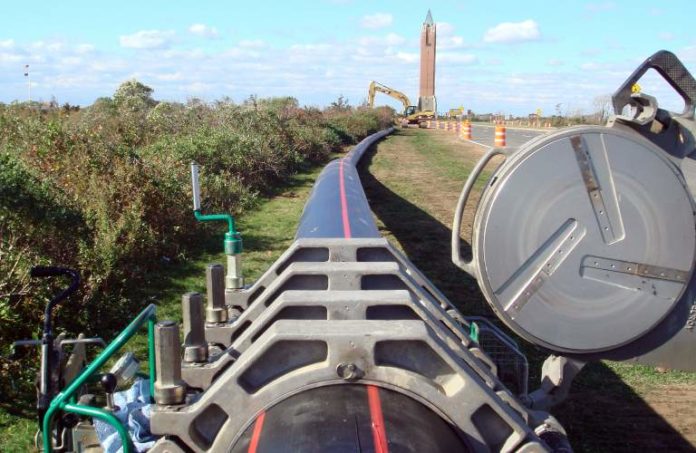 New Jersey’s utility dignitaries are reviewing a slate of proposals meant to solve the onshore transmission as well as cable manufacturing pieces of the wind energy buildout, which has the state looking to add 7,500 megawatts of offshore wind into its power portfolio by 2035.

Also at stake? What names Jerseyans will soon learn.

Once as foreign as the Scandinavian vowel in its name, Ørsted is now a known entity in New Jersey after securing its bid to develop the state’s first utility-scale offshore wind farm. It’s followed by an anxious list of companies waiting to find out what part they might have in that process, too.

One of them is Rise Light & Power, which has partnered with Delaware River Partners LLC to solve one of two outstanding challenges to New Jersey’s coming wind energy transition: How do you bring power back into the grid, and where is the supply of these components coming from?

Sid Nathan, vice president of external affairs for Rise, said the proposal to bring this use to the Delaware River Partners-owned Repauno Port & Rail facility is pending before the New Jersey Board of Public Utilities. The goal is to attract a manufacturer to build out the operating center, so that the region has a local option for manufacturing these specialized cabling parts.

“We recognize that the offshore wind industry is going to require a significant amount of cable production,” he said, adding that the project Rise is involved in would be the “first submarine cable manufacturing facility in the region, with the only one (on the East Coast) otherwise being in South Carolina.”

Neither are sold at the local home improvement store. Or locally at all, for that matter.

“In order to develop and build an offshore wind industry in New Jersey, as it currently stands, it will take a global supply chain effort to make it happen,” Nathan said. “But we can do it here, and with union labor, in sites that are in industrially zoned areas. … I think this puts New Jersey on the map as a center, and, really, the epicenter of cable manufacturing in the region. It would be historic.”

This site would only be the start of what’s needed, considering the scale of what the state (and the region) would like to do with wind farms in the Atlantic Ocean.
Plus, Nathan adds, there’s a strong potential for a new site in the state to serve markets even outside of the offshore wind energy in the U.S., as other countries look to either establish or bolster their own programs.

“There’s going to be a lot of competition in the sector,” he said. “Upwards of 1,000 miles of cable per year will be needed to develop this nascent stage of the offshore wind industry in the United States. Only one facility (generating about 120 miles of cable annually) is not going to be enough.”

So, the partnership Rise looks to establish with a manufacturer isn’t something Nathan expects to make New Jersey’s sole source of this specialized cable equipment.

“There are also other sites in the region that could be located for those types of cable manufacturing facilities, and other developers are talking about that as well,” he said. “Sometimes you need first-movers in industry. That’s what we see ourselves as.”

The other proposals the state is weighing have to do with transmission projects that can hook energy generated in wind farms back into the grid. To that end, regional transmission organization PJM is conducting a procurement on behalf of the BPU that Massachusetts-based Anbaric Development Partners hopes will make it more of a known entity in New Jersey.

The company has submitted to PJM a large portfolio of projects, including, for example, the Boardwalk Powerlink Project. That project would deliver up to 2800 MW of offshore wind to a substation in South Brunswick.

It’s also touted as the potential for a shovel-ready project that follows in the mold of the more seasoned European market, which plans large-scale transmission alongside its wind projects.

Janice Fuller, president of the mid-Atlantic for Anbaric, said her company and at least 12 others submitted bids as part of a proposal review that is planned to be wrapped up in October. With each developer submitting many projects, there were just under 80 bids put forward.

“It’s competitive, but I do think that, from what we’ve been able to see of the available information, that we put together a comprehensive package that not only solves for how do we deliver (wind energy) for now, but how we can future-proof something as much as we could,” she said. “It’s a competitive process, but we’re competitive within it.”

The state has started focusing conversations on transmission planning since about 2020, Fuller said. It’s a big interest in the industry overall, which she said was on display during Atlantic City’s recent offshore wind energy conference, the International Planning Forum.

“When New Jersey unveiled that it was going this direction, really, no other state was taking an approach just like this yet,” she said. “So, I think states, and the industry as a whole, were watching this particular solicitation with curiosity to see what kind of interest there would be, how many companies would participate, and the quality and creativity of the potential solutions.”

As more geographies up and down the East Coast get swept into the wind energy conversation, Fuller said her company will follow where the opportunity goes.

But, like the others competing to be the next name-checked company in New Jersey’s wind energy scene, she’s hoping the Garden State’s utility leaders see the value in their project.

Joe Jingoli, whose Jingoli Power was just chosen for engineering, procurement and construction contracts as part of Ørsted’s and Public Service Enterprise Group‘s Ocean Wind 1, said there are boundless opportunities to be found in New Jersey’s supply chain and transmission endeavors.

“If you look at the uncertainty in the natural gas supply with the Ukraine war and what’s happening with climate change, there’s never been a better time to be part of electrifying the economy with wind energy,” he said.

PSEG sells its fossil generating portfolio for $1.92B

Energy’s role in N.J.’s future: 5 questions with William Sullivan of...