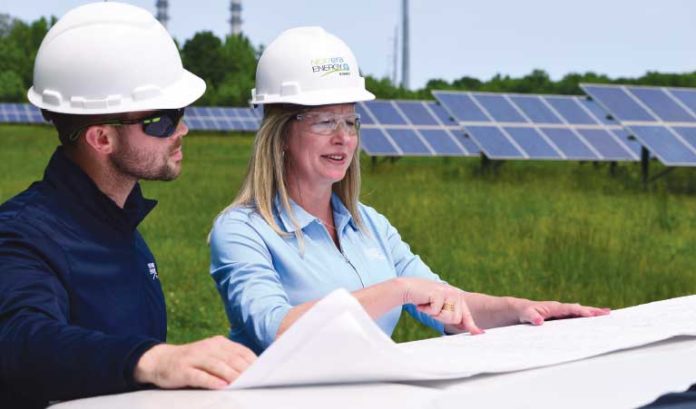 There are plenty of reasons why NextEra Energy should be considered a strong contender to be selected to build the multibillion-dollar transmission project that will bring the energy created by offshore wind turbines onto the land, and thus make it available for use.

But NextEra officials are not relying on past performance to win arguably the most important Request for Proposals in the state’s quest to become the East Coast leader in wind energy production. They feel their proposals are different from the 80 combined ideas the 13 companies collectively have submitted, for one simple reason: their view of the future.

While the state asked all respondents to provide a plan that would be able to transmit 7,500 megawatts of energy from offshore by 2035 — in line with Gov. Phil Murphy’s green energy goals — NextEra Energy is believed to be the only one that has proposed a transmission system capable of handling nearly 12,000 MW.

In the simplest of New Jersey analogies, NextEra is suggesting building a turnpike of transmission that will not need to be widened down the line — a widening process that will prove far more costly and far more disruptive to the environment and local communities than doing it all once at the start.

NextEra officials, who feel the state has positioned itself to be the leader in this sector, said New Jersey should act now to maintain that advantage for years and decades to come by building the biggest transmission system possible.

“I think the state’s got to pick: Do you want to buy something now that just solves the immediate round solicitations — or do you want to think a little bit further into the future,” he said.

Becky Walding, the executive director of development at NextEra Energy Transmission, agreed. She’s confident NextEra’s push to go all-in is the right one for the state.

“Offshore wind is going to be what the state needs to meet a lot of its renewable goals,” she said.

To be sure, NextEra officials also are eager to point to their past performances as a reason to be selected. The company, they said, not only has the size to commit to a larger project, it has the experience to handle the inevitable issues that will arise.

The reason: NextEra Energy can be considered two companies in one. It has owned and operated a regulated utility, Florida Power & Light (which serves 5.6 million customers), since 1925. But, it later started NextEra Energy Resources, a company it said is the “largest generator of power from the sun and the wind” in the world, one that has done large-scale projects in more than 35 states.

“We have two elements to our DNA,” Valle said. “Because we own a utility, we understand the importance of reliability — keeping the lights on, keeping the bills low — in an industry that obviously is highly regulated.

“Then there’s the renewable energy piece, which shows we not only know how to build things around the country, but be successful in competitive biddings.

“Nobody else does what we do at our scale.”

The New Jersey Board of Public Utilities currently is reviewing the proposed solutions and gathering information on them. NextEra officials — as well as those from the other 12 companies in the process — already have presented to the BPU, which is expected to make a decision in October.

Most feel it will be approximately five years before the state begins to see the energy benefits of the plan. Of course, that will line up with the time the state’s first offshore turbines began operation.

Valle and Walding recently spoke with ROI-NJ about NextEra’s expertise and all things green energy in the state. Here’s a look at the conversation, edited for space and clarity:

ROI: Despite your enormous size, many people in New Jersey likely are not familiar with the company and may not know you have had a presence in the state for more than 20 years. How are you currently involved in New Jersey?

Becky Walding: We have one large-scale solar project and battery project in West Deptford and then 68 distributed solar projects (which means the company provides supplies close to the end-user on a specific project, as opposed to a solar farm that serves a community).

We’ve been very active doing distributed solar here, because New Jersey doesn’t have a lot of land for larger projects; we’ve tried to meet the needs of New Jersey with what it has. So, we’ve done a lot of rooftop commercial and industrial-type solar facilities, working perhaps with individual colleges, hospitals or commercial properties. It’s been more of a function of the opportunity here.

Now that the state has set its clean energy goals, there’s more of an opportunity for NextEra to step in make a bigger investment, which is what we want to do.

ROI: NextEra is huge in the transmission business, especially when it comes to offshore wind energy. Can you talk about your overall experience in the space?

Matt Valle: We have thousands of miles of transmission built in Florida and all around the country in electric, solar and battery. But, one of the assets we have that we obviously think is really important to this project is transmission in the ocean to bring in offshore wind.

We are the owner and operator of a submarine cable that comes into downtown San Francisco that supplies 40% of the city’s power. Realize, the energy that’s going into them is from the wind, so it’s constantly going up and down all day. If that cable goes out, massive problems would occur. We have to manage that. This is not just flipping a power switch on and off. These are dynamic systems.

The partner you select better be able to problem-solve because there are obstacles that come up. Having a team with the expertise to get through those issues is critical. This is one of the ways we feel we differentiate ourselves, because we already own and operate one of these systems.

ROI: Some of the offshore wind developers have partnered with transmission companies on their bids. Some might argue getting a company that is working with both the turbines and the transmission makes a lot of sense. What say you?

BW: Having the transmission piece done with takes a lot of risk off of the offshore developers. It will let them focus on getting their part finished. And then, all they have to do is hook up with us; we’ll be sitting there ready.

MV: There is a risk to putting all those eggs in one basket, too. You may hit issues with financing. You’re talking about a project that will cost billions of dollars. There’s no cheap way to do this.

ROI: But there could be a more cost-effective way. Or, at least, that’s one of the pitches of NextEra Energy when you presented to the BPU on April 12. Why do you feel you’ll be tough to beat on cost?

BW: You can never truly compare solutions, apples to apples, because they are all a little bit different, but we make sure all our projects contain strong cost containment. That’s part of our innovative culture. Because we compete in so many areas for so many contracts, we have learned how to innovate. That makes us different from a lot of utilities. Sometimes, we feel like we’re more like a technology company.

ROI: Will all that be enough? How confident are you about your chances of being selected?

MV: We don’t know what factors they are going to weigh more than others. I think we have certainly a lot going for our bid and we have tried to comprehensively address as many of the state’s objectives with how we designed our proposal. We feel good about it. But there are a lot of factors that go into a decision like this.

For instance, we have been powering New Jersey for nearly a quarter-century, and yet few know who we are. That’s why we think it’s really important for us to tell a bit of our story, explain who we are.

And we’re not a common brand you find in a grocery store or at a mall. If you lived in Florida, you would know Florida Power & Light. But even there, this is the other arm of NextEra Energy.

I think that’s kind of the ground that our team has to cover in the next couple of months, so that people know who we are: a reliable partner who can get this done.