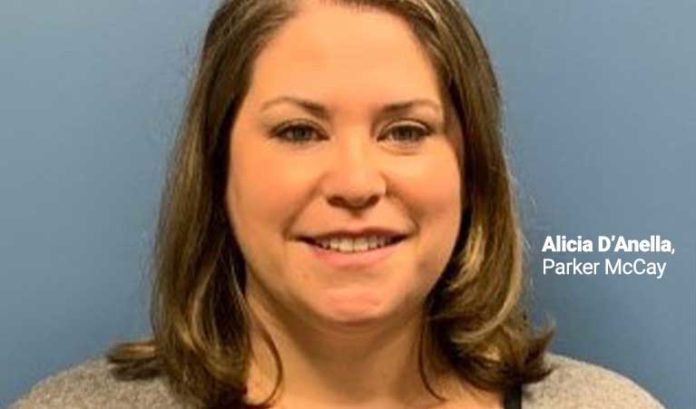 D’Anella joined Parker McCay as counsel in its Public Schools and Education Department. She started her legal career at a small firm in Woodbury. There, she represented public entity clients on litigation, personnel issues, ordinance drafting and bill compliance. In 2014, D’Anella transitioned to another local firm, where she served public school clients for the last seven years. In her new role as counsel at Parker McCay, she will represent and advise boards of education; offer professional development training for boards, administrators and staff; handle litigation; assist with investigations; and attend public meetings.

D’Anella will practice out of the firm’s Mount Laurel office. She received her law degree from Rutgers School of Law – Camden in 2008 and her Bachelor of Arts in psychology from the University of Pennsylvania in 2002. She is licensed to practice in New Jersey and Pennsylvania. 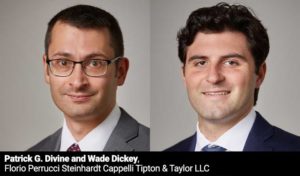 Devine is an associate in the Litigation Practice Group at the firm’s Phillipsburg office. Prior to joining the firm, he served as a law clerk in the Hunterdon/Somerset/Warren Vicinage for the Hon. Haekyoung Suh. Devine is a graduate of Drexel University Thomas R. Kline School of Law. During law school, he worked at Philadelphia Legal Assistance as part of the Drexel University Civil Litigation Clinic and served as a staff editor of the Drexel Law Review. Before law school, he received his Bachelor of Music from West Chester University of Pennsylvania and his Bachelor of Science from Drexel University. He is admitted to practice law in New Jersey and the U.S. District Court for the District of New Jersey.

Dickey is an associate in the firm’s Cherry Hill office concentrating his practice on personal injury litigation and education law. Prior to joining the firm, he served as a judicial law clerk to the Hon. Deborah Silverman Katz, the assignment judge of Camden County. During his clerkship, Dickey worked on prerogative writ, tort, contract and OPRA cases, and assisted the assignment judge with the administration of the vicinage. Dickey graduated from Rutgers University School of Law, where he served as a commentaries editor for Rutgers Law Review. His state constitutional law comment regarding school financing was chosen for publication. While attending Rutgers Law School, he served as a judicial intern for the Hon. Noel L. Hillman and a judicial extern for the Hon. Paula T. Dow. Dickey received his B.A. from the University of South Carolina. He is licensed to practice in New Jersey. 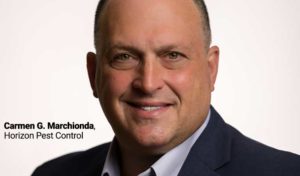 “For the last two years, through my involvement in an executive leadership forum where we met, I witnessed firsthand Carmine’s exceptional problem-solving skills, and, just as importantly, his communications and interpersonal skills. As a family-owned firm, our company culture is central to the life of our organization, where many of our employees have worked for nearly two decades. I am confident that his collaborative approach and big-picture problem-solving skills will greatly benefit both our team and customers alike,” noted Holst III.

With more than 25 years of executive leadership, management and financial experience in health care, government and other nonprofit entities, Marchionda most recently served as CEO of the Arc Rockland, a not-for-profit agency that works with people with intellectual and other developmental disabilities and their families. Prior to this, he served as CEO and president of Spectrum for Living, a New Jersey-based human services organization supporting people with intellectual and developmental disabilities. He also has held positions within the public sector as a nursing home administrator, long-term care consultant and as county administrator for Sussex County, where he oversaw 40 departments serving approximately 150,000 residents. 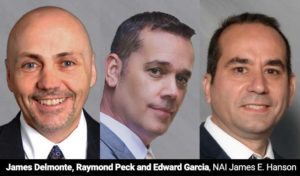 Also boasting a well-rounded resume, Peck brings over 20 years of experience in financial services to his new role with NAI James E. Hanson, where he will work closely with Senior Vice President Joshua Levering, focusing on office sales and leasing in northern New Jersey. Garcia will work closely with Vice President Sigmund Schorr to manage transactions in the greater New Jersey and Pennsylvania regions. Garcia’s background spans various senior leadership roles in a diverse array of specialties including finance, business development, and mergers and acquisitions. 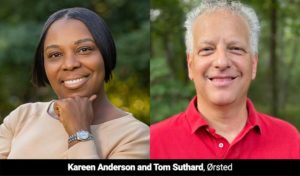 Ørsted, the global leader in offshore wind energy, is expanding its presence in New Jersey with the addition of two new hires. Kareen Anderson has been named senior human resource business partner, and Tom Suthard has been hired as stakeholder relations manager.

Anderson will be based in Newark at Ørsted’s new North American Digital Operations Headquarters. Working across the organization, she will be part of a team building and scaling the human resources department to support Ocean Wind and other clean energy projects in development.

Suthard will be responsible for leading strategic partnerships with stakeholders at all levels, including local elected officials, members of community, civic and business organizations, and individuals interested in learning more about Ørsted and its plans to build two offshore wind farms approximately 15 miles off the southern New Jersey coast. 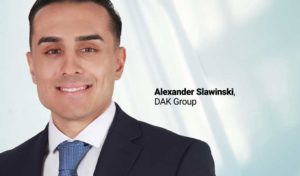 The DAK Group, a boutique investment bank specializing in maximizing value for middle-market companies, announced that Alexander Slawinski has joined the firm as an analyst.

“We are experiencing an increasing stream of transaction activity and a promising rise in valuations and are taking steps to ensure our clients capture the benefit of the market upswing. We continue to add top talent such as Alex to meet the needs of our clients” said Alan J. Scharfstein, president of the DAK Group.

Slawinski has joined the DAK team as an analyst to support DAK’s middle-market business clients as they navigate the M&A landscape. He will combine his industry research and analysis experience with his skills at financial modeling to identify value and opportunity for clients.

Colvin joins Avison Young as a project manager based in the firm’s New Jersey office, where he will be responsible for a wide range of office, industrial and other institutional projects throughout the tri-state area, helping manage pre-construction and construction phases. LaPenta joins as assistant superintendent, also based in New Jersey, where he will be working with Project Managers Mandy Jaust and Anthony Shashaty on the firm’s Opal assignments in the Woodbridge area.

PDS Biotechnology Corp., a clinical-stage immunotherapy company developing novel cancer therapies based on the company’s proprietary Versamune T-cell activating technology, announced that Matthew Hill has joined PDS Biotech as its chief financial officer to lead the company’s financial strategy through its next phase of growth.

Hill brings more than 25 years of experience in finance and operational leadership roles for life science companies. He is joining PDS Biotech after spending the last several years at Strata Skin Sciences as its CFO, where he led the financial vision and strategy for the medical device company. Prior to joining Strata Skin Sciences, he held CFO roles at several companies, including Velcera prior to its acquisition by the Perrigo Co., and EP Medsystems prior to its acquisition by St. Jude Medical.

While at JPMorgan Chase, he served in a variety of roles, including head of diversity & inclusion for Global Technology, head of employee accessibility and chief quality officer for Home Lending Technology. His achievements greatly advanced the global financial institution’s D&I initiatives and resulted in significant growth and traction in that area leading to JPMC becoming a leader in innovative D&I programs.

PARTS iD Inc., the owner and operator of, among other verticals, “CARiD.com,” a leading digital commerce platform for the automotive industry, announced that it has hired Michael Bowers as general manager of Boating & Marine and Terry Graham as general manager of RV & Camper, two high-growth verticals for the business.

Bowers comes to PARTS iD with extensive supplier management and purchasing experience across the boating, automotive and fitness retail industries, including eight years at the Brunswick Boat Group, the largest boat manufacturer in the U.S., and 15 years at Panasonic. Graham is a retail industry veteran, previously holding management roles at Sears and Advance Auto Parts, as well as Camping World, where he worked as a senior buyer for nine years, focusing on improving the product assortment, growing the vendor base and developing market strategy.