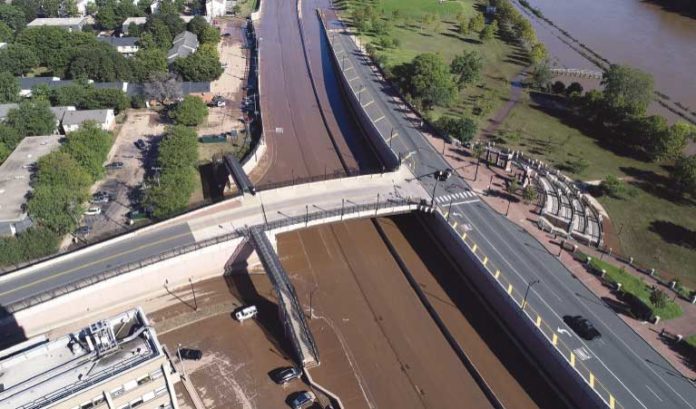 An emergency rule expanding the areas in New Jersey that are subject to flood hazard permitting requirements — a regulatory action that also updates stormwater requirements for new developments — is likely to be issued by mid-June and will go into effect immediately upon issuance.

The likely issuance, which was announced last week by the New Jersey Department of Environmental Protection on a conference call with industry stakeholders, is the result of an executive order in January by Gov. Phil Murphy, who directed the DEP to adopt Protecting Against Climate Change — or “PACT” — regulations, following the damage caused by the remnants of Hurricane Ida last summer.

Additionally, NJDEP determined that historic rainfall data is not an adequate basis for predicting future storms. Despite this timeline, the regulations still have the potential to catch some property owners off guard, said Dennis Toft, the chair of the Environmental Law Group at Chiesa Shahinian & Giantomasi.

“NJDEP reacted to the tragedy of Hurricane Ida to accelerate the implementation of this rule by a year or more,” he said. “Unfortunately, this may catch some property owners off guard, as it creates challenges for those who relied upon existing rules when they made investment decisions.”

The rules are intended to address emissions of greenhouse gases and to incorporate climate change considerations into land use permitting requirements.

Since that time, DEP has promulgated changes to air permitting requirements and has been working on drafting the land use portion of the PACT rules.

The full land use rule proposal, which is more than 1,000 pages, is scheduled to be published later this year.

Toft, regarded as one of New Jersey’s leading Brownfields redevelopment practitioners, sees a number of scenarios that will emerge.

“As a result of this action, properties or areas of properties that were not previously regulated by NJDEP will now be subject to flood hazard permitting requirements,” he said. “Flood hazard elevations in non-tidal areas will be elevated by 2 feet.”

“(They) also will be required to be more robust, taking into account projected increases in rainfall amounts through 2100,” he said.

Toft said the DEP was planning on directly addressing these concerns in the PACT rule proposal that will be published this fall; however, the impacts from Hurricane Ida and recently announced plans to use Hurricane Ida recovery money led NJDEP to issue a portion of the PACT rule on an emergency basis rather than wait the formal adoption of the full PACT rule, which is likely to take a year from publication.

The DEP believes it is important that this rule apply to projects undertaken using Hurricane Ida recovery money.

As described by NJDEP, the emergency rule will include the following:

⎯ In non-tidal areas, the base flood elevation will be raised by 2 feet above existing mapped elevations.

This will have the effect of making the first finished floor of any structure 3 feet above existing elevations.

Tidal areas are not affected by this provision.

Instead, projections of increased rainfall amounts through 2100 will need to be considered.

The mechanism for doing so will be provided in the rule.

NJDEP has not yet provided the full text of the emergency rule, but these are the highlights mentioned on the conference call.