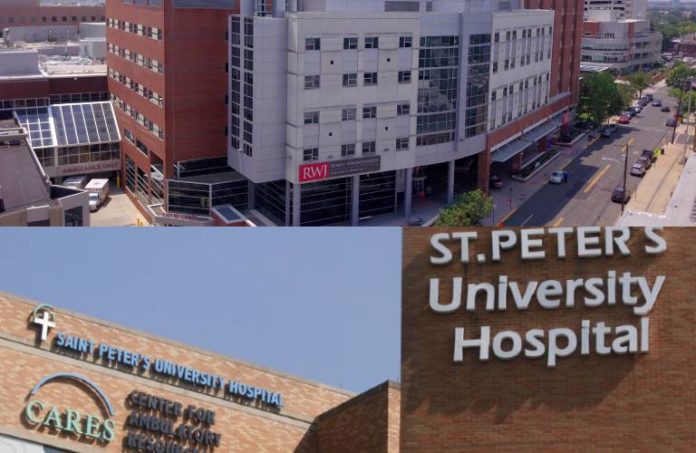 The proposed integration of Saint Peter’s HealthCare into RWJBarnabas Health — one that had the potential to create a transformative academic medical center in New Brunswick — was blocked Thursday afternoon by the Federal Trade Commission.

The FTC, in a statement by FTC Bureau of Competition Director Holly Vedova, said the acquisition “will harm competition for inpatient general acute care services, which are a broad range of essential medical and surgical diagnostic and treatment services that require an overnight hospital stay.”

The FTC, which technically authorized an administrative complaint and a suit in federal court to block the acquisition, said the move would be harmful to residents in the area.

“There is overwhelming evidence that this acquisition would be bad for patients, because the parties would no longer have to compete to provide the lowest prices and the best quality and service,” Vedova said.

RWJBH CEO Barry Ostroswky and Saint Peter’s CEO Les Hirsch said they were disappointed by the FTC’s ruling and will consider how to respond — most likely an appeal in court.

They wrote in a joint statement:

“Today, we were notified that the Federal Trade Commission is going to file an administrative complaint and has authorized a suit in federal court to block our proposed transaction that would have enabled us to build the first premier academic medical center in New Jersey to increase services and provide better access to such care for New Jersey residents.

“We are incredibly disappointed by these FTC actions against our proposed transaction, which has received full approval from New Jersey’s attorney general and is supported by grassroots community groups, employer groups, unions, managed care organizations and elected officials at all levels within the state of New Jersey.

“We are most disappointed, however, for the people of New Jersey — especially those who reside in our most vulnerable, chronically underserved communities — who will be denied access to the complex care only provided by premier academic medical centers.

“We shall be reviewing the FTC’s complaint, which the state of New Jersey did not join, over the coming days and determine how to best move forward.”

The ruling by the FTC was not necessarily surprising, as the merger would have meant both hospitals in New Brunswick would be under control of the same system.

Leaders of RWJBarnabas and Saint Peter’s, however, told ROI-NJ last month that they were hopeful that the transformative nature of the center would be seen as enough to override any antitrust concerns.

The academic medical center, similar to what is found in New York City and Philadelphia, would be the first of its kind in New Jersey.

The hospitals had set June 10 as their integration date, essentially pushing the FTC to offer an approval or rejection by then.

The FTC, which last winter blocked a proposed merger of Englewood Health into Hackensack Meridian Health because of similar concerns in Bergen County, apparently was not swayed by the 1+1=3 argument of how the bigger system would be exponentially better.

It said the acquisition would give the combined health care system a market share of approximately 50% for general acute care services in Middlesex County as a whole, easily resulting in a presumption of harm under the antitrust laws.

The FTC was busy Thursday. It also blocked the merger of two of the four biggest health care systems in the Salt Lake City area.

Thursday’s ruling is another milestone moment for a proposed merger that has been under discussion and planning since 2019, when Saint Peter’s announced it needed a partner to be able to continue to care for the community it has served for more than 100 years.

An official integration of the two would have created an 1,145-bed hospital — one of a size that is needed to do treatment and research on nearly any condition possible.

Ostrowsky, in last month’s interview with ROI-NJ, said the ability to provide such treatment and such research was the impetus for the decision to integrate.

“We want to do this for the state of New Jersey,” Ostrowsky said then. “We’re not-for-profit. It’s not like we have shareholders around the country who are going to make a lot of money. Our shareholders are the people in the community.”

The transaction was vetted and approved by numerous organizations and officials.

In April, it received CHAPA approval from Judge Lisa Vignuolo. That is, it was reviewed and cleared under the state’s Community Health Care Assets Protection Act, which was created specifically to ensure that communities do not suffer a loss of health care services — or an increased cost for them — due to a merger.

In approving the merger, Vignuolo said the transaction will serve the public interest.

The New Jersey Legislative Black and Latino caucuses, as well as the heads of the African American and Hispanic chambers of commerce, have written letters of support, explaining how they feel the merger will help residents in their communities.

Last month, Ostrowsky said he hoped such support would count for a lot.

“We have a bunch of support from people at every level of elected officials, corporate interests and affinity groups, like chambers of commerce. They’re all in support of this, they’re all local, they’re all focused on the people of New Jersey — and they all think it’s the right thing to do for the people.”