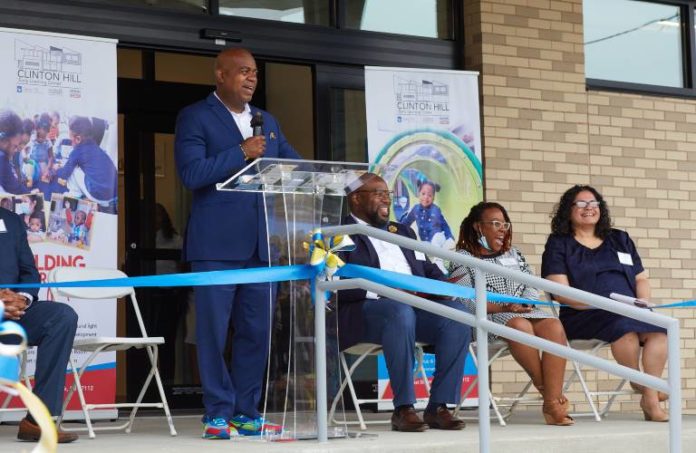 The Clinton Hill Early Learning Center, a state-of-the-art early learning center providing education and care for up to 198 children, opened in the Upper Clinton Hill neighborhood in Newark’s South Ward this week.

The center, located at 30 Demarest St., brings together two community-based providers to provide families with a seamless continuum of care and education from birth to age 5.

The facility is impressive:

The center, however, is about more than the building.

Organizers said it’s about keeping a promise to the neighborhood — one that was made two decades ago, when lots were razed in anticipation of a new high school, which was never built.

Newark Mayor Ras Baraka and Newark Public Schools Superintendent Roger Leon stressed how this new investment in the Clinton Hill community aligns with their shared commitment to ensuring that every child in Newark gets off to a safe and healthy start in life, and that longtime residents of Newark benefit from renewed interest in the city.

The partnership leverages 48 federally funded Early Head Start seats provided by La Casa de Don Pedro and 150 pre-K seats awarded to Clinton Hill Community & Early Childhood Center. CHCECC has been operating in the Clinton Hill neighborhood for more than 30 years in what was a former bank building, using its basement and trailers as the program has grown.

The Clinton Hill Center is free and open to all children, with a preference given first to residents of the South Ward, then the city of Newark. For both providers, families must meet income and work requirements for free to low-cost admissions.

Maher Charitable Foundation constructed the center with a close to $20 million investment. CHCECC and La Casa de Don Pedro are working together to provide high-quality early childhood education and care in this purpose-designed building.

The center was designed by Rich Alderiso of DI Group Architecture and built by Donnelly Construction.