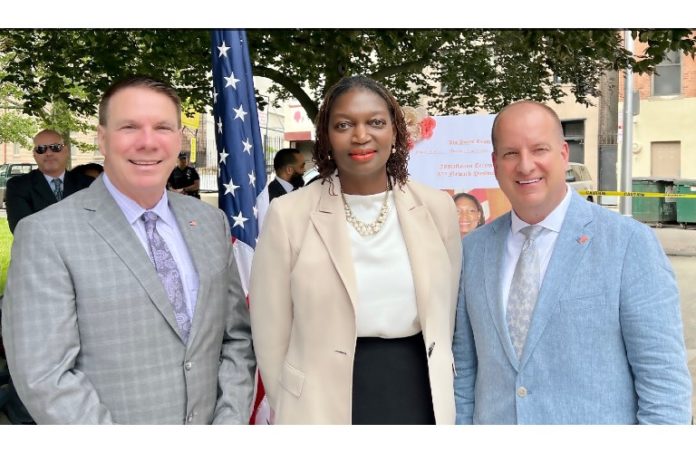 Although she’s been the acting Newark postmaster since 2020, Silvia Glover was officially sworn-in as the 35th postmaster of Newark on June 2.

Now in the highest-level postmaster position in the state of New Jersey, with retail and delivery oversight of the city of Newark, Glover is not only the first woman to hold this post, but its first Black woman.

“I am committed to excellence and service here in Newark. As postmaster, I will achieve that by implementing the Postal Service’s Delivering for America 10-year plan,” Glover stated.

As acting postmaster, Glover became responsible for overseeing more than 500 postal employees working at 12 stations and branches serving an estimated population just under 300,000 people. Since 2020, she has hired over 100 new letter carriers and has focused on service performance metrics around Priority and First-Class mail.

Glover is currently enrolled in the exclusive USPS Managerial Leadership Program. She also graduated from the immersive Processing Distribution Management and the Management Essentials for Field Leadership program.

The first known Black woman to serve as postmaster was Anna Dumas, appointed postmaster of Covington, Louisiana, in 1872. In 2020, 7,610 of the nation’s 13,617 postmasters were women, representing more than 55%. In 2022, global majorities accounted for 52% of the Postal Service workforce.

McKoy: Juneteenth is nice — but the ask is so much...

Statewide Hispanic Chamber to honor 5 at its annual gala