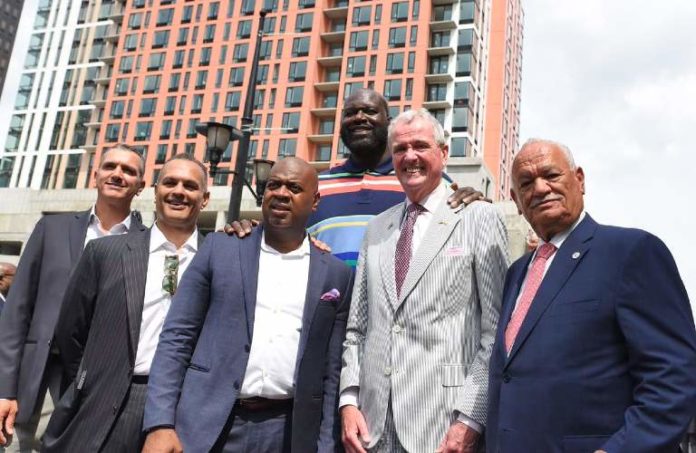 After all, basketball legend and Newark native Shaquille O’Neal is an investor — and he does have a name that Newark Mayor Ras Baraka proudly proclaimed is known all over the world.

And, although Shaq was the star of the topping-off ceremony on Monday afternoon, personally named and thanked by all nine of the other speakers, he downplayed his role on the transformative 33-story, 370-unit — the largest residential building in Newark history.

“I don’t know how to do none of that,” he said, pointing to the towers. “But the Boraie group does.”

It was one of the many times he drew laughs from a gathering of approximately 200 friends of the product, local dignitaries and even the Shabazz High School marching band. That’s what Shaq — the ultimate modern-day spokesman — is now known for.

But Wasseem Boraie, vice president of Boraie Development and leader of the project, said O’Neal is so much more than that.

O’Neal and the Boraie family have become a dream team of development in Newark — one that credits the mayor for enabling them to get to the finish line.

And Shaq is the one who got it started.

“Here’s the truth,” Wasseem Boraie said after the ceremony. “This was all his idea. Shaq came to me in 2005. He’s the one who brought me to Newark.

It’s been a perfect match.

Boraie officials are confident they will have no trouble filling 777 McCarter — in fact, inquiries are staring to pour in, even though leasing is months away from starting. They feel the same way about the recently announced multifamily project that will be part of Lionsgate Newark Studios, which is being built near Weequahic Park.

And, on Monday, they announced they hope to break ground this winter on a 330-unit project on the waterfront near NJPAC (and Rector Park), initially known as Newark Waterfront.

Omar Boraie, the president and patriarch of the company, who made his mark by betting on New Brunswick when few others did, said Newark always has held great promise. He’s thrilled to be there, he said.

So are his sons, Wasseem and Sam, who are all-in.

Sam Boraie said the location of 777 McCarter — across from the Gateway Center, Newark Penn Station and the Ironbound and next to Ironbound Newark (the Mars Wrigley building) and the Prudential Center — makes it ideal.

“I think it will attract a different crowd to Newark than ever before,” he said.

And what they will find when they get there will be all Newark, Wasseem Boraie said.

“I think this building will capture the flavor and the cultural of this unique city,” he said. “Newark is not Jersey City. It is not Brooklyn. It is Newark. And we’re going to highlight that with a building unlike any other that ever has been built here.”

That’s music to the ears of Baraka, who praised the Boraie family as a group that does groundbreakings and ribbon-cuttings.

“A lot of people talk about development, but they actually get it done,” he said.

The large number of units — especially the affordable block — are important to the city, he said. But 777 McCarter means so much more.

“Let’s be honest, this is about much more than just this single address — as important as it is,” Murphy said.

This is about seeing through on a vision that few had for the city. The dream team of Shaq, the Boraie family and Baraka did.

Baraka praised O’Neal for his foresight and commitment.

“We appreciate him because he’s from our community,” he said. “He decided to purposefully and deliberately come back here (and) invest here.”

Shaq returned the praise — saying he had wanted to do projects such as these since 1992, the start of his pro career — but that it wasn’t until he met the Boraie family and Baraka (who took office in 2014) that he was able to start getting things done.

Wasseem Boraie said his family has been thrilled to be a part of a long journey that he feels is just getting started.

“Mike and Shaq came to me in 2005 — that’s when we actually started looking in Newark,” he said. “So, we’ve been in here 17 years. This is not an overnight thing — and it’s not going to end anytime soon.”