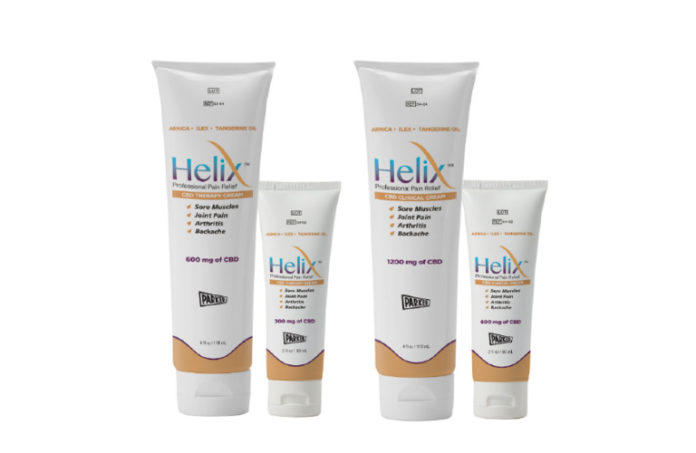 How’s this for product-testing a pain management solution: A 75-and-older softball tournament in Florida.

Parker Labs has developed, among other products, a pain relief cream infused with CBD. Tom Rodenberg, director of global sales for the company, said there’s good science behind the use of the cannabis ingredient as a potential alternative to other pain relief options, such as addictive opioids.

Less scientifically, he also heard from a friend after that aforementioned senior sports field test. And it was a home run.

“I had given him our Helix therapy cream with CBD,” he said. “He sent me a text message and said: ‘This stuff is fantastic. It got me through this tournament. Where can I buy it?’”

The Fairfield-based company’s CBD solutions, which come in clinical and therapy formulations, were announced earlier this year. They’re sold to consumers — a mix of athletes and maybe past-their-prime weekend warriors — through chiropractors, physical therapists and fitness professionals.

It’s another foray into new waters for a company that for much of its seven-decade history focused on a highly particular product: ultrasound and electromedical “contact media,” or the gels that might be applied for something like a sonogram imaging during pregnancy.

“We basically invented that,” Rodenberg said. “Before we came out with that product, mineral oil was used for ultrasounds, or patients were submerged in a big tub of water.”

Rodenberg added that the company saw an opening in the clinical pain relief cream market several years ago when a leading product, Biofreeze, changed to an over-the-counter business model.

The company began by manufacturing and selling Helix Professional Pain Relief Cream to health care professionals, a formula that consisted of menthol — the ingredient that gives such creams their cold and heat sensations — and other ingredients.

Now, it’s one of only a small number of manufacturers trying to add CBD to the mix, Rodenberg said.

“Will this be our No. 1 product? Probably not, honestly,” he said. “We’re known worldwide for (the ultrasound gel). Any country dealing with ultrasounds at all knows that product. But we do hope Helix becomes the next recognizable name. That’s our goal.”

The marketing materials of Parker Labs point to research papers on the efficacy of CBD in relieving chronic pain, with one review highlighting findings from 28 different studies that point to the compound having more reported benefits for patients than placebos.

There’s a hurdle, however. And that’s overcoming some of the misconceptions about CBD, the second-most-prevalent compound in marijuana after THC.

“For example, those in sports medicine practices are still sometimes leery of using it because they don’t understand it fully,” Rodenberg said. “They sometimes think it would have THC, which would then cause an athlete to fail a drug test. But we test each and every batch of this to make sure there’s zero THC contained in it.”

Putting the education still required in the market aside, Rodenberg’s big-picture take is this: CBD has a role to play in helping respond to the nation’s opioid epidemic as an alternative form of relief for chronic pain sufferers, without the addictive properties.

In less lofty terms, the local business believes it has a product that will earn fans among athletes (young and old), or just those who might need relief from a yard work-inflicted backache.

“We’re a trusted name in the medical field,” Rodenberg said. “No one is questioning the quality of our products, as they’re really the gold standard. We know we’ll attain that in this other market as well.”