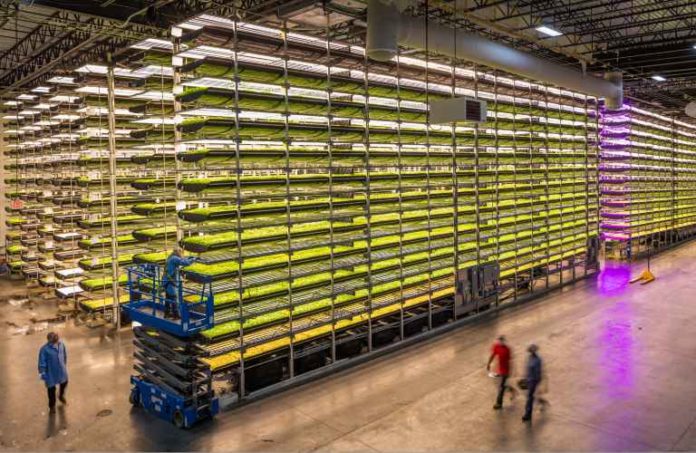 David Rosenberg is the head of AeroFarms … which is probably best described as an innovator in the indoor farming space … but it’s an innovator, specifically, in proprietary aeroponics and indoor vertical-farming technology … and that might deserve its own lengthy explanation. …

Thankfully, Rosenberg said, the name AeroFarms usually requires less of a preamble than that today.

The globally relevant AeroFarms has come a long way — and the once-novel concept of vertical growing has, too — since the company in 2015 turned a former paintball and laser tag arena in Newark into a center for vertically growing leafy greens … in a way that few had ever heard of.

“What I’m finding is that more people know all of this now,” Rosenberg said. “(The idea of vertical farming) has become more mainstream. And, importantly, more people are recognizing and appreciating the benefits of controlled agriculture systems.”

Rosenberg, co-founder and CEO of the Newark company, said the idea of growing plants inside, upward, with water and nutrients at the forefront instead of plots of soil, is an increasingly familiar way of growing plants — including in the mightily relevant ag-adjacent cannabis sector.

AeroFarms now uses this manufacturing-like method of replacing greenhouses with warehouses to grow more than 550 types of plants, which end up on the shelves of at least that many grocery stores. Its growing system is on display in the cafeterias of workplaces such as Google, American Express, Citibank and Audible.

The indoor vertical farming company is still solidly New Jersey-based, with a site for growing as well as research and development efforts centered in a Newark headquarters, but it has more recently been spreading its roots worldwide. An example of that is its construction of the world’s largest research indoor, vertical farming center of its kind in Abu Dhabi.

Rosenberg explained that the value proposition of AeroFarms and its agriculture platform is stronger in some parts of the world than others. Somewhere like the United Arab Emirates might be where it’s strongest.

“If you think about the Middle East, there’s not a lot of farmland, not a lot of fresh water,” he said. “But what there is, is relatively abundant energy and, in some places, an interest in investing in the spirit of embracing innovation and being early adopters.”

Locally and abroad, AeroFarms is a big name in vertical farming. But it’s no longer the only name.

There are more businesses moving into the future-farming landscape all the time, Rosenberg said. They see what the company has been able to accomplish, he added, and its sustainability-minded message. And it inspires them to try to have the same impact.

“But I don’t think a lot of people appreciate how hard it is and all the different areas it takes to succeed,” he said. “There can be a few winners, but, unfortunately, there’s also a lot of losers. I think there’s going to be a lot of companies in this space having a tough time.”

Rosenberg appreciates the additional business and investor interest, and the potential for different solutions and innovations to enter into the vertical-farming ecosystem.

At the same time, he’s also aware of the potential for those different solutions to encounter some growth-stunting issues. Necessary food safety controls — in a line of business with no bacteria-killing washing or high-heat cooking step — are one of them.

“Whatever you build, you have to operate and sanitize in a food-safe environment,” he said.“When I look at other systems, I don’t think they’ve all really incorporated elements of sanitary design, all the processes and procedures required.”

Rosenberg puts it this way: There’s a romanticized notion of a morning trek into the field to plant seeds, letting water and sun do its job. That couldn’t be further from what indoor, vertical farming is about.

The upshot is the far greater — sometimes hundreds of times greater — productivity that the AeroFarms system boasts. And it claims it’s found ways of growing plants in less days than it did several years ago, as few as 14.

It’s applying that enhanced productivity to new crops, such as the hops that it now grows in its Newark facility for Anheuser-Busch InBev-owned craft brewery Goose Island.

Rosenberg said he’s open-minded, but right now he’s not particularly focused on how its system might be applied to growing cannabis. Atlantic City-based GLTCannabis is one of the local players taking a stab at vertical-farming cannabis.

Rosenberg added that certain aspects of the company’s sophisticated system and industrial controls could have some utility in ag-related industries, and that’s something the business is still exploring.

Vertical farming might be more familiar than it once was, but Rosenberg considers the sector at an early stage of the end-goal revolution he sees for it in an ag sector dominated still by in-field farming.

Customers, he’s convinced, are ready for that overhaul.

“There’s been a change in the mindset of consumers,” he said. “They want to know not only what a product is, but how it’s grown. And, today, they’re celebrating how we grow.”