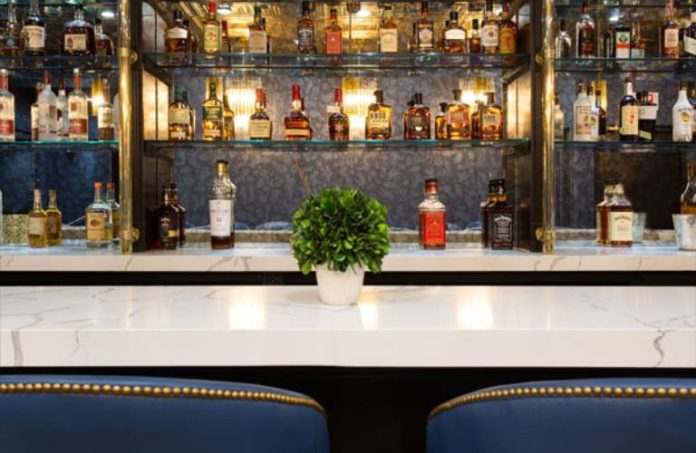 Longtime lobbyist Jeannine Frisby LaRue’s first reaction to the Lobby Club, a members-only bar and restaurant planted strategically within walking distance to Trenton’s State House, might not have differed too much from yours. …

It costs how much?

LaRue was flabbergasted by the upscale establishment’s price tag: A whopping $10,000 for the highest level of membership, with a monthly $750 piled on top for that tier.

So, she might not be who you’d expect to get a glowing review from today. But she’s spent a lot of time, 46 years to be exact, as a lobbyist making her case for clients in Trenton’s vortex of political deals — sealed often by handshakes in the famed steak house DiLorenzo’s before its closure — and she’ll tell you this might be the most impressive power-broker meeting spot yet.

The necessity of the new establishment, which finally had its COVID-prolonged opening in October, hadn’t really set in for her until last year’s shuttering of Mastoris Diner & Restaurant. The Bordentown eatery had become something of a successor to DiLorenzo’s.

“I didn’t think I’d live to see Mastoris close its doors,” LaRue said. “The pandemic has hit so many restaurants. And, when that one shut down, I really had to look for where you could meet with someone for breakfast or lunch.”

And there wasn’t an agreed-upon spot like that — unless you count the small quarters of a Dunkin’ Donuts or a new Starbucks steps from State Street. A lobbyist looking to talk in private about the ins-and-outs of New Jersey business and politics probably wouldn’t.

LaRue, who is senior vice president at the Kaufman Zita Group, and now a member of the Lobby Club at the $1,000 tier, said the bar and restaurant at 17 E. Front St. arrived at just the right time to fill a void in Trenton.

And it wasn’t filling it with cigar smoke, or any of the other dusty characteristics of a place such as DiLorenzo’s that LaRue recalls from decades back.

“Times have changed, and so have the rules for lobbyists,” she said. LaRue added that, in the early days of her trade, “A lobbyist might treat a legislator to a $125 dollar bottle of wine at a restaurant. Those days are over.”

Important for LaRue in a sort of trial period that she participated in at the Lobby Club was that men and women alike were being respected. At best, similar establishments in the past weren’t shining examples of giving women a seat at the table.

At worst, LaRue suggests, women were subjected to some of what was explored last year in former Sen. Loretta Weinberg’s Workgroup on Harassment, Sexual Assault and Misogyny in New Jersey Politics, which led to the introduction of a bill requiring campaigns and political parties to implement antiharassment policies, training and a confidential sexual harassment complaint process.

“I wanted to see how the men conducted themselves when they came in, honestly, because, when people get a couple of drinks in them, they can behave differently,” LaRue said. “I also wanted to see how the establishment handled women clients versus the men. And I can say (Lobby Club General Manager) Tara Burns is the ultimate professional and maintains a professional environment.”

Burns expressed pride in the efforts her staff makes to cater to all of its members — both during restaurant hours and the after-hours fundraisers that are already being regularly held there.

As for who the first wave of members at the business are: Lobbyists such as LaRue occupy a share.

“But it’s not all lobbyists, legislators and lawyers,” Burns said. “We have teachers, hospital leaders, judges. It’s a nice mix of people. And some of them are more into the social aspect of it than to share a drink with business professionals to build relationships.”

The Lobby Club’s owner is Eric Poe, who started thinking about the feasibility of launching a Trenton restaurant after deciding to headquarter his own insurance business and its 250 employees in the area.

“The challenge is that a vast majority of restaurants make all their revenue on the weekends, and there just isn’t the business crowd enough in Trenton to sustain a regular restaurant in that way,” he said. “What it does have is legislators or lawyers who need to have discussions about sensitive topics … but the fact that there was zero business catering to them was mind-boggling to me.

“And, if you’re paying a lawyer $500 an hour, it’s hard to believe you want to eat in a corner of a state cafeteria and game-plan there for the second half of the day in court.”

However much of a need there was, launching a restaurant and bar during the pandemic was a gamble. Poe took the risk anyway, drawing parallels to airlines that doubled-down on pricey business class seats on planes in times when flight catastrophes meant only professionals were reliably buying plane tickets.

The buzz of political and business life in Trenton, however, is only just starting to return to what it once was.

“Right now, I would say we’re about 50 or 60% of our capacity,” Poe said. “That’s primarily because jury trials in Mercer County have not uniformly been brought back (in-person to Trenton) because of COVID. It was the same thing with the Legislature, but they’re in full force now.”

Interest in memberships is apparently moving in the right direction. There are about 10 members at the highest $10,000 level, which, along with some tiers below it, grants access to the 2,500-square-foot Apex Executive Center, private conference rooms soon opening on the restaurant’s second floor.

The establishment’s leaders say they’re happy with the interest they’re seeing in the lowest tiers, too. Those come at a one-time cost of $1,000, or $500 for government employees.

About a half of a year into its operation, Poe is glad to be making an argument for the potential of new business in the state’s long-overshadowed capital.

“Our hope is we’ll be a place people remember as one of the first to invest in this way in the city,” Poe said. “It’s about putting your money where your mouth is.”