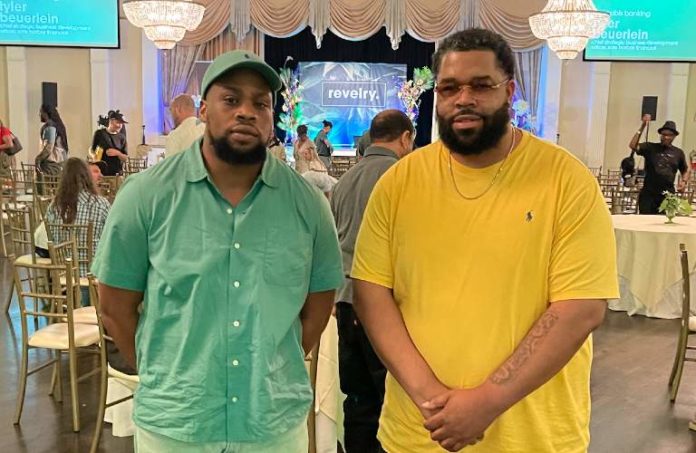 There are a number of ways to measure how much opportunity the recreational cannabis market might contain in New Jersey.

Brendon Robinson starts with the first month’s figures: the ballpark $24 million in sales. He sees potential for it to only be a taste of what’s to come in the local adult-use market.

Then, there’s the expansive workforce that growth will lend itself to. That’s the part Robinson is really focused on. More individuals will need to be trained for the sector’s work in New Jersey; he and longtime friend and business partner Stanley Okoro are trying to be a big part of that.

But Robinson passionately articulates that all that talk of opportunity — all the revenue and all the jobs — is not as meaningful if it’s not being enjoyed by all Jerseyans.

Robinson and Okoro co-founded the nonprofit Minority Cannabis Academy to try to infuse the state’s market with that sort of representation. Their long-term goal is to churn out a diverse labor force for the growing New Jersey cannabis market by providing free training to minorities and the disenfranchised communities most impacted by the War on Drugs.

Okoro wanted to get involved in the cannabis sector as soon as Gov. Phil Murphy’s 2017 election win, but it wasn’t until Robinson lost his job at a bank as a result of COVID-19 cutbacks three years later that the pair actually launched a company together, called 420 NJ Events.

Through their work with the digital media platform, which Robinson refers to as a “cannabis lifestyle brand,” they attended a media gig held by cannabis education and consultation company Leafy Green Agency. After hearing about how people were able to secure a costly cannabis business license and start profiting off a soon-blooming industry, they left feeling dejected.

“We were in the car after listening to this, just frustrated and wondering how Black and brown folks are actually going to be a part of all that and get access to this industry,” he said. “We’re not the type to talk about problems without solutions. So, that day in the car, this organization got formed.”

Robinson, the Jersey City-based organization’s CEO, said they’re early into the big-picture goals they have for the Minority Cannabis Academy. The organization will in June invite a first batch of 25 students from cities such as Newark and Jersey City for an eight-week pilot program over the summer. The students will be learning about marijuana cultivation and other industry skills.

“It’s a good social equity concept, so we’re excited about it,” he said. “But, we honestly haven’t gotten the reception we were hoping for yet. It has been up and down.”

The organization’s leading supporter has been the Secaucus-based medical marijuana business Harmony Dispensary, and its CEO, Shaya Brodchandel.

Robinson is hoping to, over time, get more cannabis industry operators in the state involved.

“We want to be the bridge between these communities and large operators,” he said. “The goal is to get more operators in the state contributing to the program. … And, eventually, employers will be able to rely on our program for staffing needs.”

Later phases of the Minority Cannabis Academy program will focus not just on training workers for cannabis jobs, but producing entrepreneurs in a highly regulated industry.

Robinson expressed that they’ve put a lot of blood, sweat and, well, money into this initiative themselves, because it’s something they’re passionate about.

And that’s echoed right back at them by people in the disenfranchised communities they’re hoping to elevate in the cannabis sector.

“Individuals are showing a lot of passion and determination to achieve their dream, which is to work in this industry,” he said. “The community is yearning for it.”