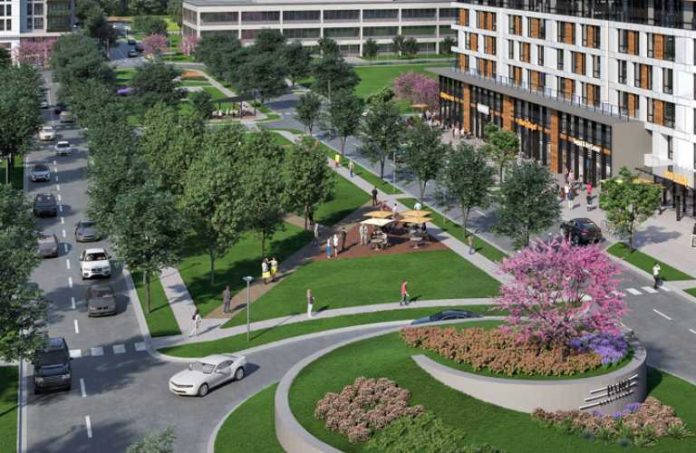 Seemingly everyone aspires to have a work-from-home option these days. But is there a better way than simply converting a spare room — or a spare table — into your home office?

The developers of PARQ, a 50-acre live-work-play community that’s begun construction in Parsippany, think there is. They are putting a post-pandemic spin on the concept. They call it: life, reimagined.

At PARQ, working from home could mean taking a Zoom call on a public green, working in a café or having a meeting in a coworking space — all in a planned community that is being designed to give workers in a hybrid world everything they need in one Wi-Fi-accessible big campus.

“(It) is unique because it’s not just knocking down one building and putting up another with more amenities,” he said Wednesday afternoon during an event intended to show the progress on the project.

“This is true placemaking.”

The two-phase initiative will repurpose and transform the former Lanidex Plaza along Parsippany Road, near the junction of interstates 287 and 80.

The property, which once contained nine buildings with a combined 450,000 square feet arranged in a suburban office space model of days gone by, will keep two of the office buildings but add two multifamily buildings (totaling 525 units), retail space and a central park area that ties it together.

PARQ, however, is about more than just work.

The transformation process has begun. Three of the buildings already have come down, a fourth is coming down and two more are set to be demolished in the next 18 months.

PARQ officials are aiming to have phase one (which includes putting up both multifamily locations) completed by the end of 2025.

Haytham Haidar, a managing director of the PARQ team, feels the campus will be an ideal fit for the post-pandemic work world.

“What COVID has taught us is that more than 40% of the American labor force will never see (traditional) office space again,” he said.

“What we set out to do with the architect, the planners, the engineers and the designers is to leverage the change in the marketplace in delivering how we work, live and play,” he said.

“And, by play, I mean providing the open public space, amenity space. The ‘play’ is: ‘Maybe I don’t want to work from my home office today, I want to go downstairs, go to a Starbucks or a small food and beverage space and work from there for a couple of hours.’”

The developers noted that the two multifamily buildings will have green design elements and smart building and home features that promote wellness — including wider hallways and bigger elevators.

Amenities will include an upscale club suite, a private event room, a children’s playroom and a modern fitness center.

To be sure, this is not the suburban office park of the 20th century.

That being said, Milelli noted that many of the features that led to the first iteration of the area — access to major roads and rail service as well as area restaurants — remain.

“Things have changed in terms of how the office world is essentially viewed these days, but the land, the accessibility and the ability to create is still here,” he said.