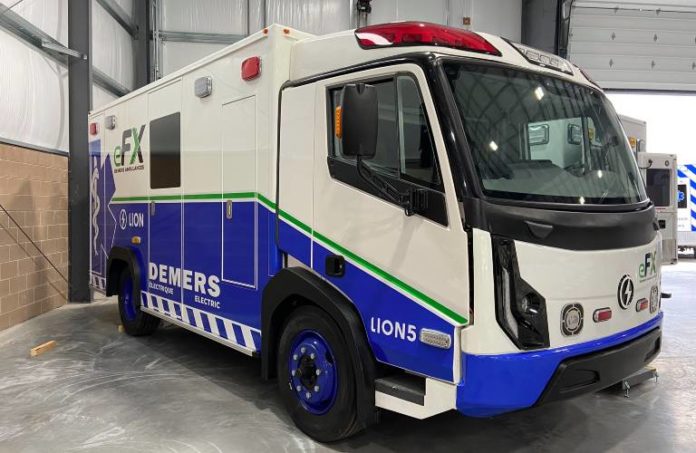 For Paterson Fire Chief Brian McDermott, the desire — and the determination — to introduce more electric vehicles to the city’s emergency service fleet came into focus when he did a minute-by-minute examination of their potential use.

McDermott, speaking earlier this week at an event held to mark the opening of First Priority Group Electrified in Flanders, talked about how Paterson’s eight ambulances make nearly 6,000 calls a year in the country’s fourth-most densely populated city.

And he talked about how each one of those trips results in an average idling time of approximately one hour — an emissions release that is becoming harder to justify.

“That’s 5,876 hours of just idling,” McDermott said. “Not to mention what we do, day in and day out. Once we understood that, it was a no-brainer.”

It didn’t take long to convince Paterson Mayor Andre Sayegh, who is determined to change a city once known as manufacturing giant into one that can be seen as a model of sustainability. It just took money.

Thanks to a grant of more than $900,000 from the New Jersey Department of Environmental Protection, Paterson is purchasing the first two all-electric ambulances in the country — along with two fast-charging stations — to replace two diesel-powered ambulances.

Electric ambulances are coming to the state.

State DEP Commissioner Shawn LaTourette said the state and Gov. Phil Murphy are firmly behind the initiative — noting that the transportation sector is one of the biggest emitters of greenhouse gases.

LaTourette said he is confident that the state is headed in the right direction of what will be a tough road.

“There’s a lot of work coming,” he said. “And it’s going to be a pretty transformative moment — not just in New Jersey, but around the country and the world.

“As we look at what we’ve always done with respect to the protection of public health, public safety and the environment, we’ve got to look at that job through a lens that acknowledges that, whether we realize it or not, every single one of us already is engaged in this transition from a fossil fuel-based energy sector to one that is more diversified and, ultimately, one that is wholly renewable.”

The DEP has programs in place to help other municipalities, too.

The heads of Demers Ambulances are thrilled to hear that. They feel they have the product that municipalities need.

The Demers eFX all-electric ambulance it has created is a custom-designed chassis with over 160 miles of range, best-in-class turning ratio, a front cab layout with optimal ergonomics and comfort features, and a next-generation medical module that offers 12% more room and a new patent-pending eFX mobility seat that will allow paramedics to retain maximum mobility while remaining safely buckled-in.

Alain Brunelle, CEO of Demers Braun Crestline Medix — the parent company of Demers — said the company is eager to bring the product to Paterson and elsewhere in the region.

“It is history in the making as our revolutionary all-electric Demers eFX ambulance arrived in the U.S. this week with a private ‘hands-on experience’ for some of our early adopters based in the Northeast,” he said.

“Interest is growing substantially within many metropolitan communities across the United States. There is a noticeable upswing with funding and grant programs available to support the purchase and infrastructure for electric ambulances.”

Alex Cherepakhov, the CEO of First Priority Group, sees all the benefits.

First Priority Group, a diversified manufacturer and dealer, has long been acknowledged as the leader in the tri-state area at retrofitting emergency and specialty vehicles, giving first responders the vehicles that they need.

The company, which is approaching its 25th anniversary, is all-in on helping municipalities make a conversion to electrified vehicles, Cherepakhov said.

The company’s expanded facility was built to accommodate FPG’s new division, FPG Electrified. The division focuses on electrification of light- and medium-duty emergency and specialty vehicles with a suite of products designed to support fleet assessment and conversion, infrastructure and energy savings.

Cherepakhov said FPGe will be the first to have the prototype of the Demers eFX, making FPGe the region’s go-to resource for communities, businesses and other organization seeking to acquire electric vehicles, reduce fleet costs and meet clean energy goals.

Cherepakhov said he is eager to get involved in an initiative that has such great importance.

“The electric ambulances will provide a prototype that can help transition the nation’s emergency response fleet to zero-emission vehicles,” he said.

“Moreover, the high visibility of police, fire and other emergency medical service vehicles will generate significant public interest and send a clear message to citizens in New Jersey and throughout the country that community leaders are serious about reducing pollutants and safeguarding the health and welfare of their communities.”