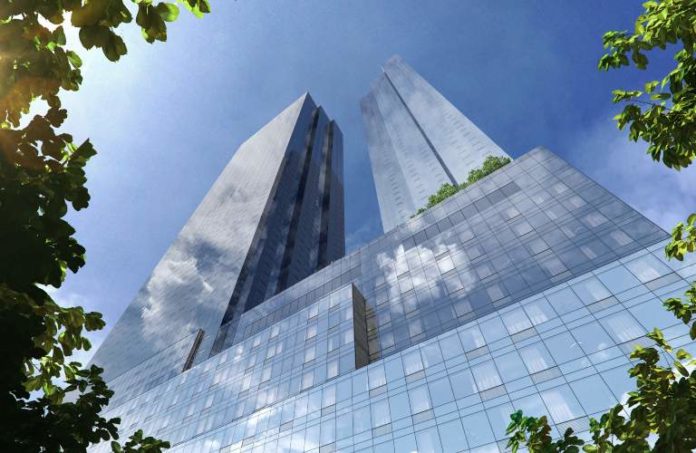 One Journal Square, a two-tower project in Jersey City so incredible and transformative that some wondered if it would ever get off the drawing board, did just that Thursday afternoon as officials from Kushner and the city celebrated the groundbreaking of the nearly $1 billion mixed-use development.

One Journal Square will feature two 64-story glass towers with incredible views of Manhattan and the Statue of Liberty. The project not only will have more than 2 million square feet of residential, retail, amenities, parking and open space — it is expected to be an anchor that helps revitalize the Journal Square neighborhood.

The numbers are staggering.

Upon completion — and there is a 2026 target — One Journal Square will comprise 1,723 rental residences, 45,000 square feet of upscale amenities and 40,000 square feet of ground-floor retail space that has been fully preleased by a AAA-rated tenant to provide goods and services to the surrounding community.

The project, designed by global architectural firm Woods Bagot, is being built adjacent to the Journal Square PATH Station by AJD Construction. It will be steps away from the neighborhood’s extensive transportation system, allowing easy access to New York City as well as Newark, Hoboken and other parts of Jersey City.

One Journal Square also will include a new sprawling public plaza at its base facing Kennedy Boulevard that will feature green space and seating areas.

Principals of Kushner, Jersey City Mayor Steven Fulop and municipal officials — who have been at odds with each other on a number of issues, including a since-pulled lawsuit — celebrated the groundbreaking.

Kushner CEO Laurent Morali tried to put it all in perspective.

“Today’s groundbreaking for One Journal Square has been several years in the making for us, and we are thrilled to begin the physical buildout of what we believe will be the crown jewel of this resurgent neighborhood and an important asset for all of Jersey City,” he said.

“Our steadfast commitment to moving this pivotal project forward was founded in our strong belief in Journal Square, both in its present and in its future, and we look forward to bringing our vision to life.”

Kushner Preisdent Nicole Kushner Meyer said the project will have extraordinary impact on the area.

“One Journal Square will offer an unparalleled lifestyle experience for residents through thoughtful design, upscale finishes and appointments, state-of-the-art amenities enhanced by our partnership with Restoration Hardware, and a well-connected location brimming with culture and diversity,” she said.

“It also reflects our commitment as developers to transform neighborhoods and invest money that positively impacts communities.”

There’s quite an investment in the project’s amenities, too.

There also will be a fitness center, yoga/multipurpose room, spin cycle suite, full-size indoor basketball court, rock climbing wall and squash court. The outdoor spaces will include two landscaped rooftop terraces and an outdoor lounge pool with a hot tub.

Michael Sommer, executive vice president, development and construction, at Kushner, feels the project will have it all.

“One Journal Square will offer every lifestyle element one looks for in a convenient and culturally-rich destination,” he said. “We look forward to the day approximately three years from now when Jersey City will have a new, iconic residential development to be proud of when we begin welcoming our first residents who will call One Journal Square home.”

As potentially magnificent as the project could be on its own, it also represents another major step in the rejuvenation of the nearly 100-year-old neighborhood, which is attempting to return to its former glory days as a business, arts and shopping hub.

Jersey City’s vibrant arts scene, which is bolstered by small independent galleries, traveling popup installations, a citywide mural arts program and Journal Square’s own Mana Contemporary, is being embraced and supported by Kushner through its development activity.

And the towers will be directly adjacent to the city’s partnership with world-renowned Parisian art museum, Centre De Pompidou, which will open Pompidou x Jersey City — the institution’s only satellite in North America, joining other locations in Shanghai, Brussels and Malaga, Spain.