Home Real Estate For Greek Development, Industrial Deal of the Year was culmination of many...
Facebook
Twitter
Linkedin 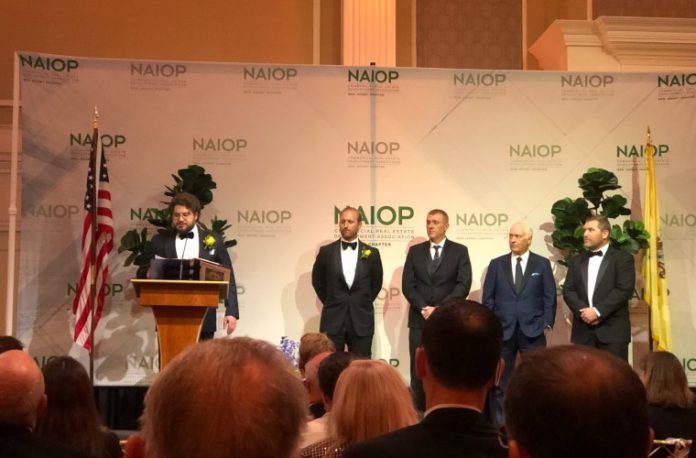 The deal of the year … nearly didn’t happen.

That’s one way to sum up the Industrial Deal of the Year award given to Greek Development last week at the NAIOP New Jersey annual gala. It was the culmination of a project that had many stops and starts.

“It took two developers, three different brokers, a large lender and a small army of design consultants to do what we did,” David Greek, managing partner at Greek Development, said.

Known as the Target at Logan North project, the team of Greek Development, Advance Realty Investors and CBRE won for successfully leasing a 1.7 million-square-foot omnichannel flow center to Target Corp. in Logan.

Following the agreement, the property traded for a record-breaking $265 million when Torchlight Investors of New York bought the newly developed building in September 2021. Logan North ultimately will have 10 buildings across 415 acres.

Greek said he was thrilled to get the award — and make the sale. He could do without the crazy process, but he chalked that up to a sign of the times.

From the time East Brunswick-based Greek Development acquired the site about seven years ago, the Logan project was faced with unique challenges. Greek said the team at Greek Development always was able to persevere, doing whatever it took to get the raw piece of land developed.

“First, there was a lot of upfront work that went into it,” he said. “We had no real development plans in place or anything.

“A big part of that project was off-site improvements that were completed for the New Jersey Department of Transportation. We widened the frontage of the road on Route 322 from a two-lane road to a four-lane road and added two signalized intersections.”

In all, Greek said it took about three years to get the prep work done after working with NJDOT, the New Jersey Department of Environmental Protection and the township of Logan, but it did it.

The project was just getting started.

Logan Industrial Park began as a build-to-suit for a long-term client, Lineage Logistics, for whom Greek Development constructed a new cold storage facility. It sits in the center of the park.

Alongside the property for Lineage, Greek began building another build-to-suit that Target found attractive.

“We started construction on a 1 million-square-foot speculative industrial building, and Target approached us while we were just beginning construction of the footprint for the building and said they needed it redesigned in a way that fit their operations,” Greek said.

Mid-construction, Greek had the team pump the brakes and slow work down to reconfigure the building and the site plan. More parking was added, the roof structure was redesigned and almost 700,000 feet of mezzanine was added to the inside. There also were other types of customizations implemented for what Target wanted to accomplish in the space.

Greek said he was most impressed with the speed at which it was all done.

“We were able to deliver the building to them, within their time and budget expectations — which is our job — but we did all this during the depths of the COVID pandemic,” he said. “We built this building in 2020 and 2021 and we sold it in 2021.”

Still, the reconfiguration of the building wasn’t the biggest obstacle.

Raising the necessary debt and getting the financing for the construction of the building was.

It was March 2020 — the very early days of the COVID-19 pandemic. There were reports that the mandates would be in place for two to three weeks or greater.

“The day we went to the market was the first day that Gov. (Phil) Murphy sent his first work-from-home order,” Greek said. “It could not have been worse timing. We had a lease with a super great credit tenant — Target, a household name — which, usually in the financing markets, will garner almost a feeding frenzy of attention. (Then) we had six weeks of crickets during our initial fundraise.”

The whole perception at that time was the negative impact of having the economy shut down for two to three weeks. There was a lot of uncertainty, but it was how the thought process was going at the time, Greek said.

Greek said it was a little scary and he and his team got in touch with basically every relationship lender that he had and questioned how no one wanted to lend against the deal. Target had signed a 10-year lease, it was a great deal, but Greek said most lenders had just turned the spigots off — they were not lending to anybody, any relationship, any project, no matter how much sense it made.

Eventually, Wells Fargo came through with $69 million in construction financing.

“We probably got a little less proceeds at a little higher rate than if we had done the final three months earlier, but we were able to complete the project,” Greek said.

“We were able to retrofit the design midstream. And, through a lot of hard work, deliver them a fantastic building. It took immense effort to redesign the sitework and keep the building on schedule. It took a lot of work from all our partners to get the building going and to get the financing — all this happening through COVID shutdowns and struggling to find labor to come to the job as well as financing the building.”