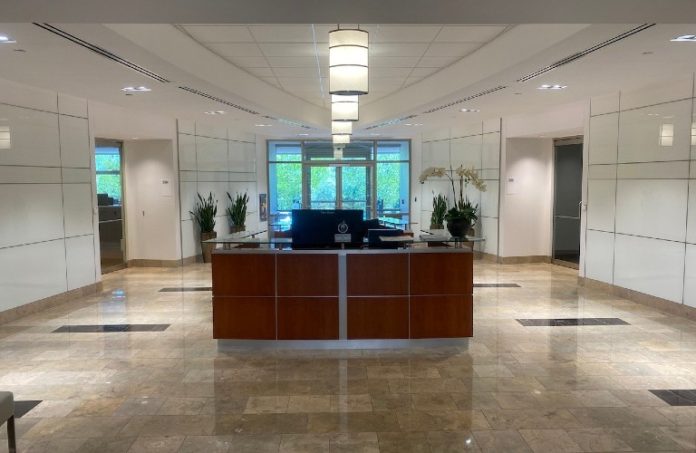 Renovations at an award-winning Class A office building in King of Prussia, Pennsylvania, are now completed, according to an announcement from the project management team at Morristown-based Avison Young and KBS.

The property, located at 1000 Continental Drive, is part of KBS’ client portfolio. Constructed in 2007, the 205,424-square-foot asset sits at the intersection of the Pennsylvania Turnpike and Interstate 76 in King of Prussia.

It was built with LEED Silver Certification and Wired Certified Gold by WiredScore, is also UL Healthy Building Verified for Indoor Air and Energy Star certified. Tenant amenities include a gourmet café, conference center, fitness center, tenant lounge and a private commuter shuttle to and from the Strafford Train Station. All common areas have been outfitted with Wi-Fi and television monitors, which are located throughout the first- and second-floor lobbies.

The major renovations at 1000 Continental include a conferencing center with casual gathering spaces to accommodate anything from smaller board meetings up to larger training requirements. In addition, all of the common areas received a refresh to modernize the public views, including the elevators, lobbies and common corridors. KBS plans to implement further improvements to 1000 Continental as part of a strategic multiyear improvement plan.

“As a company with 30-plus years of experience owning and operating top-tier office properties, KBS understands the advantages that a refreshed office environment can provide as it welcomes tenants back to the workplace,” Tracey Kasper, principal of project management for Avison Young, stated. “Avison Young was pleased to deliver for KBS the first round of renovations at 1000 Continental to help maintain the building’s status as a market-leading address.”

KBS said it is witnessing a major flight to quality as office employees return to working in person and saw it as the opportune time to invest in renovations.

The projects were led by Avison Young’s senior project manager, Alan Zambarano, with local support from John Colvin, project manager. Zambarano has been leading capital improvement and tenant projects for Avison Young and has a longstanding relationship with the KBS team.

Prism: Construction moving along at $120M Wonder Lofts in Hoboken