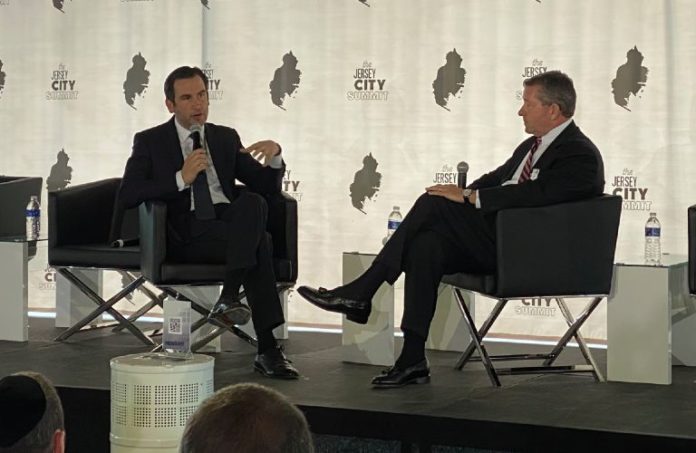 As interest rates rise and the economy cools, many mayors and economic development leaders in municipalities across the state are having concerns about how that will slow development — or even halt it — in their region.

While Jersey City has experienced a building boom in the past decade that few municipalities in the country can match, Fulop said the city took steps to make sure development would continue forward during leaner times — even if developers got hesitant.

During a one-on-one interview Thursday with Philip McGovern of Connell Foley before a large crowd at the Jersey City Summit for Real Estate Investment, Fulop said direct investment by the city will help it keep moving forward during an economic lull.

Big projects that others develop are great for the city, Fulop said. Having your own is even better. That’s why the city is investing hundreds of millions of dollars of its own money in the Journal Square area in projects such as the Pompidou Center and the Loew’s Theatre and hundreds of millions more elsewhere, including SciTech Scity, he said.

“The thought was,” he told the developers and investors in the crowd, “that, even if you all get a little skittish, and the environment is changing, there’s enough force from the city’s dollars that we will be able to keep some of the momentum going.

“I think it’s going to bear out over the next year.”

To be clear, Jersey City is getting plenty of help from the development community.

Journal Squared and One Journal Square are bringing massive high-rise multiuse projects to the city. Fulop said numerous 30-story and 60-story towers should be visible in the next six months.

“You just haven’t seen them yet, because they’re not above four or five stories yet,” he said.

While Fulop has been pleased his administration seemingly has been able to fulfill a decades-long quest to develop the Journal Square area to its fullest, he stressed he has made it a point to grow all of the areas outside of the downtown.

To do this, his administration had to solve another longstanding issue that no one has been able to: inner-city transportation.

These efforts will pay off in lean times, too.

“Internally, what we’re trying to do to keep (Jersey City) as a livable city is invest in mass transit, where the state hasn’t been capable of doing it,” he said.

“We’re thinking of ways to solve some of the challenges that we know others can’t solve for — with clever public-private partnerships — and then making sure that we’re mindful of those investments being in particular outside of downtown,” he said.

“People like to think about what’s happened here downtown and say, ‘Look all those high rises, the city has invested a lot of dollars.’ But, if you look at our budget, in reality, (how we’ve been investing is) disproportionate outside of downtown.

“I think that’s why you’ve seen some of the changes that you’ve seen.”

And why Fulop is confident the city’s progress will not be slowed by the economy.

Selective’s staff could double Branchville’s population … but many work remotely...