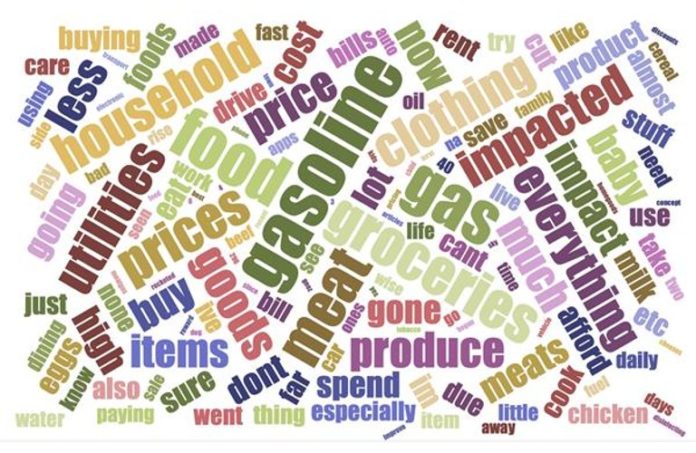 Quitting smoking, taking on “odd jobs” for extra income or making one’s own coffee are just a few of the ways consumers said they have cut back on personal spending recently as inflation begins to hit hard.

Provident Bank on Tuesday released the results of its consumer inflation survey of 600 adults, ages 18-plus, that shows how people are adjusting their routine spending and travel habits as costs continue to rise.

People are feeling an immense amount of financial pressure right now. Unfortunately, this is not surprising after the Labor Department reported earlier this month that the U.S. Consumer Price Index hit a 40-year high in May.

While some consumers have cut back on some nonessential spending, like dining out and unnecessary travel, others reported much more drastic changes such as skipping meals, conserving water and eliminating meat from their diets. Data from the survey shows that more than 10% (10.5%) of those asked reported eliminating all nonessential purchases and more than 70% (71.67%) said they have made at least some changes to personal travel habits.

When asked which price increases on regularly purchased products or services have hurt consumers the most, gasoline, groceries and clothing were among the most frequently mentioned items. More than 50% (53.33%) said they now spend between $101-$500 more per month on groceries.

With the average price of gasoline in the U.S. surpassing $5 per gallon for the first time, reports of canceled vacations and a decline in leisure travel have begun to make headlines. According to the survey results, 32% of drivers are now spending between $101-$250 more per month on gasoline, with 13.5% reporting a monthly increase in fuel costs between $251-$500.

In addition to gasoline, groceries and clothing, respondents named baby products, meat, utilities, household goods, milk and alcohol as adding the most to their monthly bills.

“As bankers, it’s important that we uncover these financial pain points for consumers as it relates to inflation,” Anthony Labozzetta, CEO and president of Provident Bank, said. “Similar to the pandemic, it’s a time for financial institutions to step up and work with their customers on how best to help them navigate through these challenging times.”

When asked what adjustments they have made to travel plans and driving habits due to the rising cost of gasoline, many reported either reducing or eliminating unnecessary travel by canceling annual vacations, visiting family less frequently or combining necessary outings like grocery shopping and doctor’s appointments into one trip. Common themes among the responses included ditching their vehicles in favor of walking or riding bikes, increasing their use of public transportation and trading in older vehicles for more fuel-efficient ones.

On how consumers are saving on personal travel: