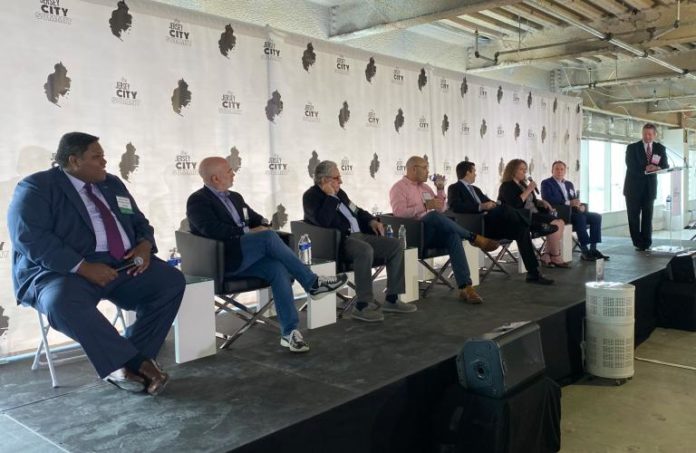 The rise in inflation — and the expected recession that appears to be coming along with it — already is having an impact on office leasing in northern New Jersey.

The reasons are obvious: A slowdown or even pause in hiring always corresponds with a hesitation to lease space or increase your footprint. The experts on the office panel at last week’s Jersey City Summit for Real Estate Investment confirmed that.

“It’s been a dramatic slowdown in the last 60 to 90 days,” Jeff Gural, the chairman and principal of GFP Real Estate, said. “Prior to that, I rented a ton of space.

The panel, however, also raised another possible trend that may not be as intuitive: A recession may expedite a return to the office for employees.

The reason: If the competition for talent wanes — and companies actually begin reducing head count, as some have indicated is a possibility — employers who want their employees back may gain the leverage they have not had since before the COVID-19 pandemic.

“Employers are talking more and more about a looming recession — and they’re already projecting layoffs,” he said. “I think that reality is sobering for folks. And I think it’s something that folks should be talking especially to younger employees about, because you’re going to see a return (to the office).

“And folks that don’t return are going to pay a greater cost down the road than I think they realize today.”

The panel, moderated by Phil McGovern of Connell Foley, provided a number of intriguing insights about the near future of office. Here is a sampling:

It’s a reason he feels companies will adjust to hybrid schedules, ranging anywhere from 2-4 days in the office. Making those days productive — and thus justifying the commute — is key, Sullivan said.

“It puts a premium on what you’re doing when you’re there,” he said. “No one wants to go to the office to Zoom all day. Everybody hates that, too.”

Security is becoming a greater concern

“Those types of things reinforce an already negative safety narrative,” he said. “It’s important that we all do what we can to rebuild the safety and security people feel using public transportation.”

A work-life opportunity for N.J.

Aaron Price, the head of TechUnited: New Jersey, said the hybrid work world can be a big plus for the state if employers can figure out an office scenario where workers can get the benefit of the big-city office while maintaining the work-life balance they crave.

“There’s a New Jersey narrative here,” he said. “There’s an opportunity for us to … geographically be a leader in that space.”

Price said such a scenario is key in the tech space, where companies have to make sure the lifestyle choice around an office location tops the ability to work from anywhere.

Rob Naso, the managing partner of BentallGreenOak, is the first admit that office is in flux.

“I wish I had a crystal ball,” he said. “Office right now, nationally, is a question mark.”

One thing is certain, he said: Having premium spaces is key. That means having interior design that’s based on hoteling — and perhaps more prebuilt space, because cost issues are key.

“The one thing I would tell you is we have 100% conviction that the office space of tomorrow is going to be different than it was pre-COVID,” he said.

Rebuilding the economic ecosystem around office

Sullivan said he hopes companies will emphasize the importance of interacting with businesses around the office.

“Making sure people are getting out and actually getting out into the local community and spending dollars in restaurants — we care a lot about that,” he said. “Encouraging people to do that, not eat at their desks, that’s going to be really important as to whatever amount of time people are in the office.”

Gural said landlords are going to need to adjust rents of their retail tenants because of this. He said the mom-and-pop outlets that sell coffee and doughnuts or light meals may be forever changed as they have become three-day-a-week businesses.

“They have no business on Friday, less business on Monday,” he said. “So, we’ve adjusted the rents. I have a lot of those tenants on percentage rent — you have to understand that it’s a different world.”