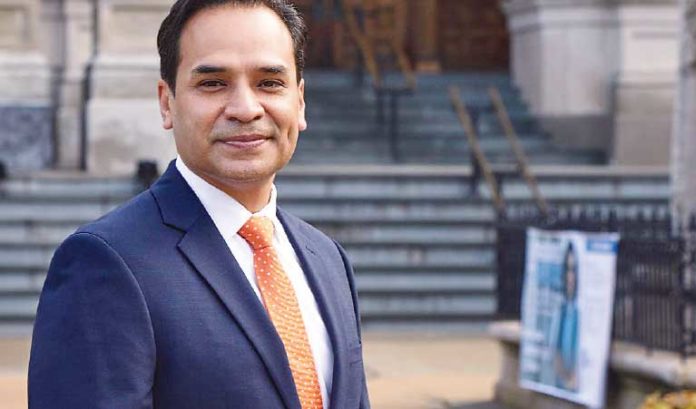 Gus Penaranda, the executive director of the amazingly fast-growing New Jersey Pride Chamber of Commerce, said he appreciates the flags, the social media posts and even the sometimes poorly conceived workplace events celebrating a company’s commitment to diversity, equity & inclusion.

During the month of June, that is.

Here’s what Penaranda really wants to know: How will you feel on Friday — the day after LGBTQ Pride Month ends.

The good news: Penaranda said he’s definitely seeing a shift in the corporate’s world approach to the LGBTQ community. It no longer is simply based on how companies can do enough to get the “gay dollar,” he said.

“Most people have begun to shift away from what they used to do, which was be an ally for 30 days out of the year, check the box, put the flag up and then, on July 1, move on,” he said.

The Pride Chamber, which includes both LGBTQ-owned and -operated companies as well as businesses that consider themselves an ally, is seeing it firsthand. The chamber has more than doubled in size since Penaranda became its first full-time executive director in January, increasing from 115 to nearly 240 members. He expects to be over 300 members by the end of the year.

The chamber’s efforts are growing, too. Already known for providing access to capital, marketing, data and networking, the chamber will begin a supplier diversity program in the fall.

Penaranda spoke with ROI-NJ, offering a few dos and don’ts on what companies — and business leaders — can do to affirm their commitment to DEI.

Do make DEI a year-round commitment

If you want to be an ally, you need to continually have discussions, meetings and events, both internally and externally, about DEI issues.

For starters, companies, suddenly in need to have more Zoom-type meetings to keep their employees together during the pandemic, reached out to the chamber to organize more panel-like discussions.

And municipalities, unable to handle a flood of requests for pride-based events in June, have had to find alternative dates.

“That’s why you see so many events in the spring and in the fall,” Penaranda said.

Don’t put your HR department in charge of DEI

And don’t just hire a chief diversity officer and let that person tackle the issues as a department of one.

“HR is not the answer,” Penaranda said. “Human resources has a specific responsibility to the employees of a company. They cannot be expected to have answers for all DEI issues.”

Penaranda said the New Jersey companies that have been recognized for having the best DEI workplaces are those that view it as a companywide effort.

“Hiring one person may be a way to start, but the only way that that individual is going to succeed is if they bring in other employees and create committees that actually have the true discussions about DEI,” he said.

Do understand that DEI impacts everyone at the company

Some confuse DEI as an issue that only impacts the LGBTQ community. Others understand it also includes other communities of workers, including veterans and single mothers or a member of any minority group, especially one that traditionally has not been a strong part of your industry or sector.

Penaranda wants companies to know it impacts the entire workforce — and can be one of the leading aspects of attraction and retention efforts.

“There are studies that show an increase in productivity and employee retention when companies begin to look inward and give groups of employees an opportunity to talk about things that are not particularly related to their job description: Should we get a group together to walk against cancer? Should we support a youth league? Should we march in the pride parade?” he said.

“Companies are seeing that there is a positive effect overall when they are doing this.”

Penaranda knows when he’s being played.

“I have 20 years in state government, so, when I talk to someone face to face, I can tell if they’re just giving you lip service and want to get off the call or walk away, like a politician that’s not interested in listening to what a constituent has to say and only wants to smile, shake your hand and walk away,” he said.

Penaranda said he’s been pleased by the reaction he’s received since January, when he joined the chamber.

“I have to say, except for one instance, every company that I’ve spoken with is all-in,” he said. “They’re set on trying to find a way to work with the chamber. Because they see us as a chamber that has a strategic plan in place to move LGBT business and business in general forward, and they want to work with us.”

Do challenge the chamber

Penaranda welcomes it. He said many companies are making sure partnerships are more than just symbolic gestures.

“They are testing us,” he said. “They want to make sure that, if they’re going to invest $20,000, $50,000 or $100,000 into the chamber, that the individuals managing the day-to-day responsibilities of the chamber know what they’re doing. And everyone has been very happy so far, so I think we’re on the right track.”

Why N.J.’s business climate may have been the big winner Tuesday...