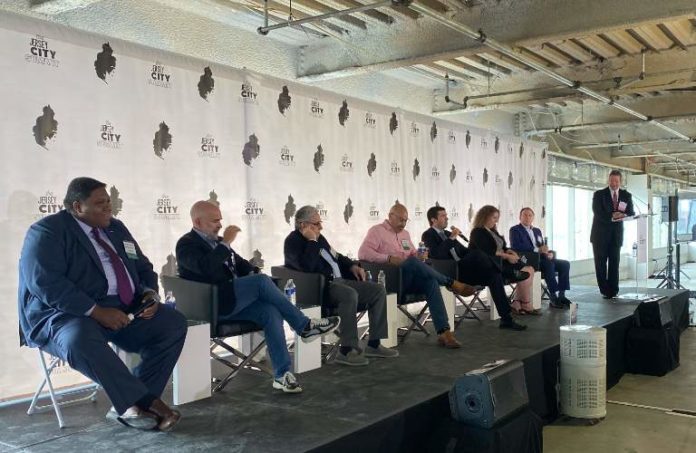 It’s a funny quirk of New Jersey geography: Jersey City, despite being one of the most densely populated municipalities in the country, can still be called a suburban location due to the behemoth known as New York City that dominates the view of the nearly 300,000 residents and hundreds of businesses in the 15-square-mile city.

But this suburban designation — no matter how it was reached — could put Jersey City in a more fortunate post-pandemic position when it comes to the office market.

So said some of the experts on the office panel last week at the Jersey City Summit for Real Estate Investment.

Some talked about the amenities that are to be had — with less travel time. Others noted the lack of crime, something that has impacted major cities across the country, plus the city’s great diversity. And then there was Jersey City’s overall fit into a better-balanced work-life situation everyone has grown to appreciate during the pandemic.

Simply put, Jersey City can have the big-city attributes with a shorter commute.

Jeff Gural, the chairman and principal of GFP Real Estate who owns property on both sides of the Hudson River, sees the pluses. And it starts with quality of life.

Jersey City, he said, has a big-city makeup in more ways than one.

“When I look at the room here, you can understand why there’s a synergy happening in Jersey City,” he said. “I speak in rooms across the country about real estate, and never in any of those other sessions do you see a room this diverse.

“We know that there’s a huge value to that. And, so, I think places like Jersey City are very well placed.”

Farrell said New York City is an attractor of talent — and that Jersey City benefits from the greater ecosystem in a way a more traditional location cannot.

“If you talk about costs and efficiencies, it’s still a more costly option to be in that suburban market where you’re going to have everybody driving,” he said. “You’re going to have to bring amenities to that space, versus being in a New York-type market, where the amenities are there. They’re shared amongst many different employers — and people can get there with public transportation.”

Tim Sullivan, the CEO of the New Jersey Economic Development Authority, was quick to point out that New Jersey has more “suburban” locations than just Jersey City. He points to Newark, Hoboken, Paterson and a host of others.

“We actually have smaller cities that are much closer to where people live — and, obviously, in Jersey City, people are increasingly living here and working here — that’s great,” he said. “We also have places like Paterson and Newark, which are much easier commute from the Jersey suburbs than going into Manhattan or Brooklyn.”

Sullivan said it’s a matter of reading the situation.

“Out of dislocation comes opportunity,” he said.

Sullivan points the state’s pilot stranded assets program, which is trying to rehabilitate and repurpose legacy spaces in the more traditional suburbs.

“They need some mixed-use, some retail and maybe some residential mixed in there to make them more appealing,” he said.

This variety of suburban offerings is key, Sullivan said.

Aaron Price, the head of TechUnited: New Jersey, said the now-almost-standard hybrid work world can be a big plus for the suburban New Jersey market — if the state can figure out the equation.

“If there’s a way for people to get to the office, whether it’s one or five days a week, because they want to be around some of the urban activity, I think New Jersey has a huge leg up,” he said.

“If we can provide people a way to live and work in a way that’s convenient. If we can figure out the traffic issue that lets them get into Manhattan or these other urban areas around New Jersey, I think we have the beginnings of a winning equation.”