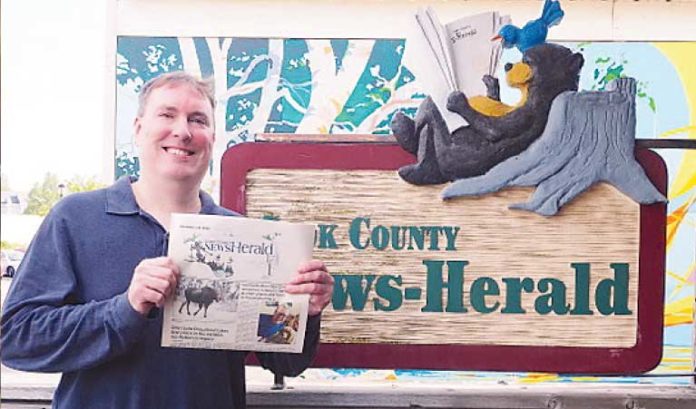 New Jersey tech entrepreneur Jeremy Gulban didn’t set out to be a hero. Yet, publishers and journalists around the country hail him as one. Gulban is acquiring rural community newspapers, but he isn’t gutting them for their assets. Instead, he’s working to save community journalism.

The reason: He believes that helping these newspapers use technology to enhance their offerings will be good for the papers, good for the communities and good for his business.

The CEO, who took over CherryRoad Technologies, based in Parsippany, from his father in 2009, is buying community newspapers through his subsidiary, CherryRoad Media, and letting their editors and reporters run them.

In the meantime, he’s investing in technologies that will make the newspapers more robust and give them a healthy online presence. At this writing, he has acquired more than 60 newspapers.

These are not online news sites. They are mostly printed newspapers that are the heart of rural communities in America. These are papers that community members still rely on for information, in locations where there might not be other sources of local coverage, and where people still don’t use the internet all that much.

As he says on his website, “CherryRoad has a successful track record of enabling technologies that play an important role in the ‘digital fabric’ of the community, and we will use this acumen to enhance the online experience of these media assets.”

Gulban is a New Jersey native who grew up in Denville and went to college at Drew University, in Madison. Meanwhile, his father had started CherryRoad Technologies. Gulban moved to Chicago to run the family-owned company’s Midwestern operations. In 2009, when his father was ready to hand over the leadership of CherryRoad, Gulban returned to New Jersey to take over the company.

“Our original systems were ERP (enterprise resource planning) systems, such as payroll systems and financial systems, and that’s what we continued to do when I took over,” Gulban told NJTechWeekly.com. Most of the company’s customers at that time were large city, county or state governments, he said.

“We continued on that path until 2017, when we decided to diversify into some other service offerings. We looked at our customers, and we found that they had a lot of needs. So, we made some acquisitions. One was an internet service provider in Massachusetts that focused on schools. Another was a web-hosting company that also had its own proprietary cloud solution. What we really wanted to do was have our own solutions to go to market with, rather than selling services for other bigger tech providers.”

The company might have continued along these lines, if it hadn’t been for the pandemic, Gulban told NJTechWeekly.com.

“In 2020, during the pandemic, we were in our houses for months on end,” he said. “We wanted to do something to help our customers. Between government customers that needed help holding public meetings remotely and schoolkids trying to do remote learning, we thought we could help, and we started building solutions. And what we found was, no one really needed our help, because they all went to Zoom. They were able to put information out for free on YouTube or Facebook. Google swooped in and gave them free education apps. And, so, there was just no market to do anything.”

It was about that time that Gulban found the hyperlocal community newspaper market, which was ripe for help and had been ignored by others. He said he wanted to find a market where his company could make an impact on people’s lives, and he did.

Making a difference in the community

“We looked at where else we could make a difference in the community during this tough time. Newspapers came to mind because, in 2020, there was story after story of local newspapers closing because they had no advertising during the pandemic. So, we said, ‘Let’s give this a shot.’

“I found a community newspaper for sale in northeastern Minnesota. I had never been there before, but I found it on a website, and I called the business broker and he was a really nice guy, as most people in Minnesota are. They are very, very talkative and we just kept engaging in the process and moving things forward. Eventually, I went out there in September of 2020 and took a look around, and we went to the owner’s house 10 miles out in the woods on a dirt road, and we signed a contract to buy the newspaper. And I remember thinking, ‘This is the best idea ever, or the worst, and we’ll find out.’”

The newspaper ventures took on a life of their own, Gulban said.

“We made another acquisition in Arkansas. We started a newspaper in International Falls, Minnesota, after the paper that was there closed, and that got a lot of people’s attention in the industry,” he said. “And, so, along the way, we wound up connecting with Gannett, obviously the largest newspaper company in the country, which was looking to sell some of their newspapers. We did a transaction with them in October 2021, for 20 newspapers in the Kansas and Missouri areas.”

During the transaction, Gulban noted that Gannett was on a similar path to CherryRoad’s, trying to bring more digital solutions into their newspapers. It had trained its staff extensively in online advertising sales and in digital marketing services. Its staffs knew how to use Facebook and Google to get their businesses out there, both to be discovered in searches and to drive leads. And they were getting into website development and hosting.

“It aligned very well with some of the tools and technologies that we had. So that’s where the lightbulb kind of went off. I thought that this vision might have some legs to it. We did a few more acquisitions, and, today, we have 63 newspapers,” Gulban continued.

NJTechWeekly.com asked Gulban how he was going to make money from these kinds of newspapers when others hadn’t been able to.

He answered: “I think some of the stories you read about the demise of the newspaper business are greatly exaggerated. There’s definitely, in my opinion, a bigger problem in metropolitan markets than in rural markets. The adoption of technology just is not as great when you go to a small town. You have the internet here in New Jersey; everyone has internet access for the most part. But, if you go to a small community in Kansas, that’s probably not the case.”

This means small, rural newspapers don’t have the same level of competition from the Googles and the Facebooks of the world for the ad dollars.

“And there’s just a different sense of community in a smaller town than I think we find here in New Jersey,” he added.

“So, I think the newspapers can make money on their own, if you have the right staff in place, and people are willing to wear many hats and do what they need to do to keep the paper running locally. I think the upside is that technology will be coming to those communities over the next five to 10 years. The question is: How do we position ourselves? The local newspaper is probably one of the most visible brands in town, especially a small town. How do we become the face of the technology, the trusted adviser to help the paper figure out how to use technology appropriately?”

Preparing newspapers for the future

NJTechWeekly.com spoke with Gulban for a few minutes about the technologies that haven’t yet reached the heartland, such as the metaverse, and how his company would prepare small-town markets for these technologies, which will come to them in the next five years or so. Gulban told us that the learning curve will be huge, but there is an opportunity here to help these businesses figure it out and survive and thrive in these tech-based environments.

He added that, in rural communities, print journalism seems to be preferred, and people like getting something in the mail. However, local newspapers must have an online presence for the younger generation; and, to keep their attention, they will have to come up with creative solutions.

The goal of all this is to drive revenue for both the newspapers and CherryRoad, Gulban stated, but there is also a huge part of this that involves giving back to the community.

“And, you know, that’s very fulfilling,” he told NJTechWeekly.com. “We are getting a lot of recognition for trying to do something for an institution that a lot of people care about.”