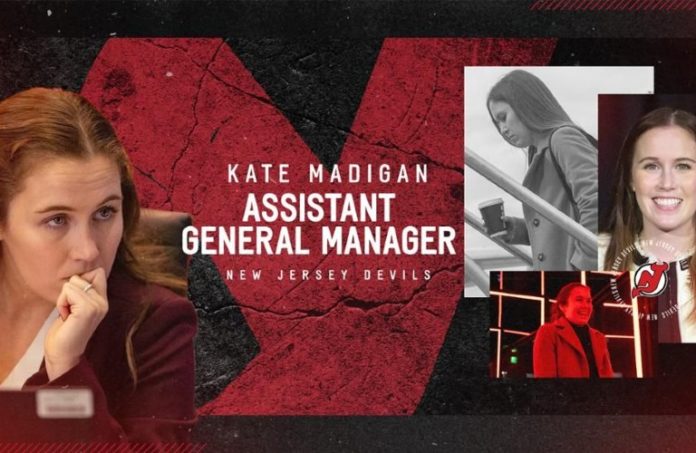 Madigan was elevated from her role as executive director, hockey management/operations, which she was in since the fall of 2020. She will serve as part of the small group that Fitzgerald will lean on for key input, strategy and decision-making, which includes roster construction at the pro and amateur levels, transactions, hockey personnel decisions, team operations, facilities management, budget and serving as part of the team’s management travel party.

“Kate has been an incredibly valuable resource to not only me, but to our entire hockey operations leadership staff, particularly over the past three years, as part of key hockey decisions,” Fitzgerald stated. “This promotion is reflective of the duties and responsibilities that Kate has assumed within our organization during that time. Her diligence, work ethic, attention to detail, ability to communicate with all staff, strategy and vision are qualities that I look for in our leadership. We have a fantastic management team in place that is working together, solely focused on the development and success of this young, evolving core group on and off the ice, and Kate will play a role in leading the way. She has an immensely promising future in the industry, and we are glad to be a part of it.”

Prior to her role as executive director, hockey management/operations, Madigan served as assistant, player information/video from 2017-19, and was director of pro scouting operations for two seasons (2019-20 and 2020-21). Prior to that, Madigan oversaw the scheduling and reports for the pro scouting staff, while working with the coaches, management and video staff throughout the year. She orchestrated the logistics regarding the 2020 and 2021 NHL Draft and the Devils Draft Command Center in the Prudential Center, including communicating with building operations, information technology, medical staffs, scouts, management, media relations and the NHL.