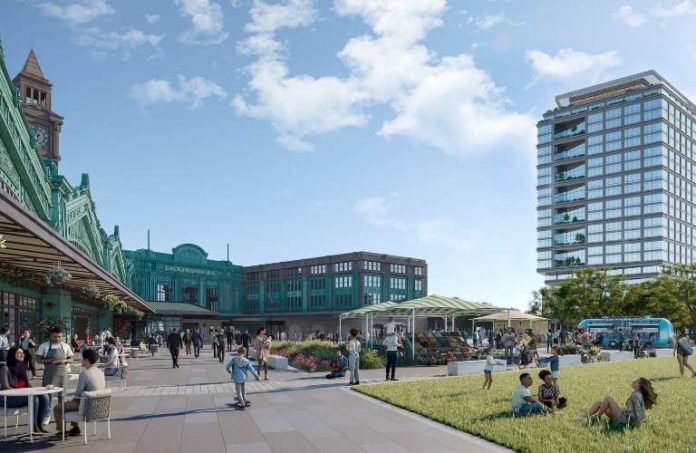 Hoboken Connect, the long-stalled redevelopment plan that will bring apartments, office space, retail and infrastructure and streetscape improvements in a smartly designed project near Hoboken’s historic train station, finally is a go after more than 15 years of delays.

On Wednesday night, Hoboken’s city council approved a redevelopment agreement with LCOR Hoboken Rail Station Redevelopment LLC, which will serve as the master developer on the transformational project.

The project is a multiphased initiative that will consist of private and public components implemented in coordination over the coming five-plus years.

Public investments will include:

When complete, officials say the project will directly and indirectly support 15,290 permanent jobs and $234 million in tax revenue annually. The city of Hoboken is projected to see 4,433 jobs on site, with $9.6 million in annual retail spending and $4.5 million in annual revenue.

Nearly 10,000 construction jobs are expected to be created.

A total cost of the project was not announced, but $176 million in the Fiscal Year 2023 state budget was given for the public improvement phase.

The project, which had stalled for 15 years, was jump-started through cooperation between NJ Transit, LCOR, Hoboken and the state.

“The state’s multimillion-dollar investment into our community will be transformational at this historic gateway into our city’s downtown,” he said. “Through the private phase of this crucial project, the city will also be able to increase its affordable housing stock with a landmark 20% set-aside through the construction of new residential units.”

NJ Transit and officials from Gov. Phil Murphy’s administration said they were happy the city was able to get to finish line.

“The governor and I are proud of this redevelopment in Hoboken and the economic benefits it brings,” acting Gov. Sheila Oliver said. “The Murphy administration is focused on strengthening our state from the inside out. We look forward to all the benefits the redevelopment project will bring to the Hoboken community and broader region.”

“We are grateful for Gov. Murphy’s substantial financial commitment for these improvements to the rail, bus and ferry facilities at Hoboken Terminal,” he said. “This will greatly benefit the millions of NJ Transit, PATH and NY Waterway customers who rely on this vital, intermodal transportation hub every year.

“We look forward to continuing our partnership with Hoboken and LCOR to bring this project to life and restoring Hoboken Terminal to be the crown jewel of our transit system.”