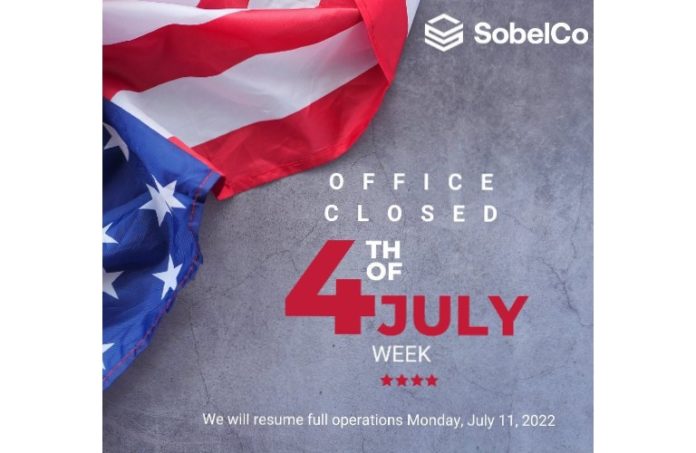 You might be surprised – what with him serving as the managing member of an accounting firm – but Alan Sobel said he didn’t break out any spreadsheets or enter any figures into a calculator to determine just how much giving his entire staff at Sobel Co the entire week off would cost the company.

That’s not what this was about.

Sobel viewed this type of mandatory shut down as a modern-day decision that best serves the modern-day workplace – one that is continually grappling with how the post-pandemic work world should operate. He saw it as a value add.

That’s why Sobel gave all 190 employees of the Livingston-based firm not just July Fourth off, but the entire week off – personal days that were a bonus for each employee.

“When we looked at it, we realized a lot of our people already were taking that week off – and the ones who didn’t take it off, didn’t have much to do,” he said. “So, we thought, this would be the perfect thing to do for the staff after one of our busy seasons.”

The reaction of the staff, who were told in early spring, was what you might expect.

“Nobody was against it,” Sobel laughed. “Our people definitely appreciated it, across the board.”

The clients didn’t seem to mind, either.

“We put it out there on all our social media – LinkedIn, Facebook, Instagram, Twitter – and the reaction we got was positive,” he said. “No one called and said, ‘What are you doing?’ Clients seemed to get it and they appreciated what we were doing.”

Sobel said he’d be thrilled if it’s viewed as cool perk in a difficult hiring era when attraction and retention is a top concern. Anything that helps the hiring process is a plus.

But really, he just sees it as a way to thank the staff for all their hard work. A staff that has to work hard the final week of the year – the time many companies do such a shut down.

“That final week of the year is tough for us,” he said. “We have clients who are doing year-end planning or are trying to close transactions, so it would be a very difficult week for us to take. This week works out very well.”

But it only works if everyone is off, Sobel said.

“You know the deal: Whenever you take time off, you know that other people are still on, and they’re still sending emails and everything else,” he said. “We tell people to shut down, but it’s hard when everyone else is still working.”

Sobel was so determined that his folks would get a true week away that he encouraged everyone to put his number down as the emergency contact.

“I figured I could handle any questions,” he said.

Through Thursday, he only had taken three calls – two of which he was able to handle quickly by himself; one just required him to briefly bring in a partner.

1. Will Sobel do it again next year?

2. Is Sobel a trend-setter in the new-age work world?

“I don’t know about that,” he laughed. “I think a lot of people have done this. And I think this could become somewhat of a trend as people are looking more and more toward providing more time off for people in a way that’s not disruptive to their operations.

“If our doing this leads other companies to think about doing the same thing, that’s great. But that’s not why we did it. This was about saying, ‘thanks,’ to our people.”

You don’t need to be an accountant to know how much value there is in that.